Farley Havelock is the hidden true main antagonist of the 2012 video game Dishonored. Formerly an admiral in the Gristol navy, he was discharged for refusing to sail under the command of the Lord Regent, Hiram Burrows. Although the official story is that Havelock was discharged from the navy after refusing to sail under Hiram Burrows, the Heart adds that he tried to seize control of the military after the Empress was murdered. Cecilia mentions to Corvo that the story isn't entirely clear. 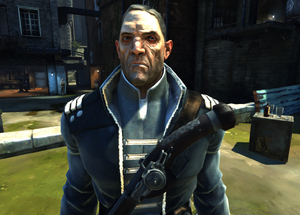 Retrieved from "https://villains.fandom.com/wiki/Farley_Havelock?oldid=3434907"
Community content is available under CC-BY-SA unless otherwise noted.