Abusing and tormenting Serpico (in childhood).

Capture Guts and bring him to Holy See (formerly).

Kill Guts to preserve her honor (formerly).
Survive against evil spirits.
Follow and join Guts to learn the more of the world.

Farnese de Vandimion (in Japanese: ファルネーゼ) is a noblewoman belonging to the influential Vandimion Family who led the Holy See's ceremonial guard called the Holy Iron Chain Knights, and was a major antagonist in the Conviction Arc of Berserk. She later renounces her position and later becomes a member of Guts' traveling party, transforming into more sympathetic and decent human being.

Farnese was a spoiled and psychotic brat due to being born with having everything she wanted materially but being neglected by her parents: her father Federico de Vandimion III was too immersed in his work while her mother spent her days at the balls and parties rather than raising her. At the time, Farnese found comfort in gleefully burning things that she did not like which appeared to stem from seeing accused pagans being burned at the stake from her window. She also took Serpico in from the streets, unaware that he was actually her half-brother as he promised their biological father to conceal his full heritage. When Farnese was to forced into an arranged marriage by her father, she voiced her refusal by setting a fire to the family estate that resulted with her being sent to a convent where she earned a place in the Holy Iron Chain Knights as the order's current leader, which the position has been traditionally held by a woman.

A year after the end of the One Hundred Year War, Farnese and her Holy Iron Chain Knights are dispatched by the Holy See to investigate a prophecy along the border of Midland that tells the birth of an angel when the sun dies a fifth time and that a "red lake" will be the site of his birth. After the solar eclipse, Farnese and her forces indeed find the "red lake": A literal lake of blood shed from the remains of countless bodies of men and horses (old members of Band of the Hawk sacrificed for Griffith's rebirth as Femto). Upon seeing this, Farnese deems such an angel to be a "Falcon of Darkness" that would bring an age of darkness down upon the world. Soon after, Farnese is given the task to investigate the black swordsman who the Holy See believes to have connection to the Falcon of Darkness.

2 years after beginning her search for Guts, Farnese and her knights eventually catch up to the swordsman shortly after his hunt for Rosine, believing that he had slaughtered normal village children and men that were actual the apostle's transformed agents before reverting to their natural forms in death. When Farnese finds Guts as he was about to kill Rosine (who would ultimately succumb to her fatal injuries received by Guts), she mistakenly believed that he was killing a normal girl alongside Jill with her men driving him off before they later surround him the following day. Still exhausted from his damaging fight against Rosine and then the evil spirits that constantly stalk him, Guts makes an attempt to go after a frightened Farnese before he was covertly subdued by her herald Serpico (in a manner that made it seem that Farnese, who never drew blood before, intentionally ran Guts through with her blade). Although she managed to capture Guts, her army was not without fatalities.

After having Guts brought to her party's camp, Farnese then attempts to interrogate Guts about the remains of the deceased members of the Band of the Hawk and his connections to the Falcon of Darkness. But Guts refuses to answer her questions, instead raising her ire when he blatantly trashed her faith with his way of talking. Outraged, Farnes whipped him for his defiance, ordering Guts to be taken from her sight while she prays to reaffirm her faith. But after sunset, his elf companion Puck who could not be seen by Farnese and her men, breaks free of Guts and the pair take the half-naked Farnese as a hostage so he can focus on escaping the restless spirits attracted by his Brand of Sacrifice.

After Guts manages to lose Serpico who was pursuing him, saving her when horse he stole for his escape lost its balance and tumbled down a cliff, Farnese gets her first glimpse of the supernatural unholy when the pursuing spirits possess the bodies of wild dogs that Guts fights off. She attempts to reach the horse to flee, only to find it possessed while it attempts to copulate her before Guts kills it too before the beast could violate her. The vicious fight continued until the dawn and the hostile spirits are forced to retreat.

But one surviving spirit possesses Farnese's body minutes before dawn, using the woman's weaknesses to force her into giving into her lust and force herself on exhausted Guts until the sun rises, forcing the spirit that possessed Farnese to leave her only to be eliminated by Puck. Realizing the bizarre situation, Farnese breaks down in shame as Serpico eventually arrives and orders him to kill Guts to preserve what little honor she has left. But Serpico, not willing to wage a suicidal fight against Guts, reminds his commander that their mission is only to apprehend Guts, deciding to give Guts a reprieve much to Farnese's wrath as he takes her back to camp while Puck senses a profound sadness from her.

Returning to Vritannis, after being scolded by her superiors for losing supposed Hawk of Darkness and losing soldiers in the process, while pretending her ordeal with the supernatural never occurred, Farnese learns that hundreds of refugees from the plague taking Midland have all gathered in the city of Albion and that the city has been suffering an increase in pagan activity. Farnese is given the task to escort Mozgus to Albion to restore order to the holy city, taking delight in the execution of rebel farmers who attempted to kill Mozgus for his cruel actions against them. But on her first day at Albion, Farnese witnesses a group of starved refugees stealing the food that the church is stocking for rations. Though she expected Mozgus to show mercy when he guided the beggars into the Tower of Conviction, including a mother and her sickly child, she was instead forced to bare witness to the inquisitor subjecting them to horrific acts of torture for being sinners in the eyes of their faith. (a sin is a sin, Mozgus says) Soon after, Farnese ends up assisting Mozgus' atrocities by taking those who are charged of heresy, regardless of their innocence or not, to the Tower of Conviction. Despite the impression Mozgus gave her from being forced the mother's brutal torture after her child was indeed tended to, Farnese learns that the inquisitor is not entirely cruel from one of his deformed disciples.

After been told the location of the pagan cult, Farnese planned her men to storm the cave and capture the cult members. But Farnese finds herself crossing paths with Guts again when he comes to the city to save Casca, once more facing unholy supernatural creatures from the possessed pagans with her men thinking they are on drugs. After pagans are suppressed and put down, Farnese later learns of her father request for her return to Vritannis before finding herself again being attacked by restless spirits of the city who died due to pestilence, torture and other manners of injustices during the chaotic Incarnation Ceremony. At that time, with Guts encouraging her to fight for her own life, Farnese comes with the truth that she used the Holy See as a means to escape her personal issues. Once the night of ordeals caused by Incarnation Ceremony ended, forced to part ways with Guts and Casca when the Kushan enter the ruins of the city, Farnese renounces her leadership of the decimated Holy Iron Chain Knights (Azan, Serpico, Jerome and Farnese being the only four survivors) and resolves to find Guts with Serpico following her after her faith is completely shattered during the devastation of Albion.

For the rest of her story, see Farnese in Hero Wiki. Although she does her best to help, her naive nature of not properly understanding the world due to her aristocratic upbringing would cause nuisances to Guts' Party on occasion. 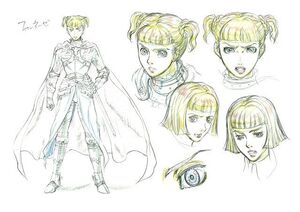 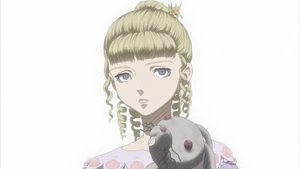 Farnese as a child
Add a photo to this gallery

Retrieved from "https://villains.fandom.com/wiki/Farnese?oldid=3836940"
Community content is available under CC-BY-SA unless otherwise noted.