Farren is a leading female character and anti-heroine in The Spy Next Door. She loves her little half-sister, Nora, but throughout the movie she's a vile, bratty, selfish, abusive and trend-obsessed teenage girl who bullies her stepmother and younger half-brother to get what she wants and tries to get rid of Bob Ho, the hero. Plus, she has a tendency to burst forth at her mother if she doesn't get her way. Farren helps save the day, but at the end of the film she never answers for her wrongdoings. 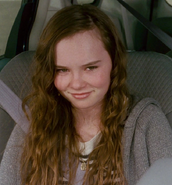 Farren smiling smugly
Add a photo to this gallery
Retrieved from "https://villains.fandom.com/wiki/Farren?oldid=3910948"
Community content is available under CC-BY-SA unless otherwise noted.