Villains Wiki
Register
Don't have an account?
Sign In
Advertisement
in: Pages with broken file links, Greedy, Wealthy,
and 13 more

Fastidious J. Spiffington is a small hamster with a cultured British accent, obsessed with cleanliness and world domination. He is nearly always seen inside a hamsterball that serves as the control center for his robots, mainly his Hamsterbot.

He has a habit of drastically increasing his pitch whenever exclaiming certain words, such as "Activate!!".

He seems to be a certified attorney.

He was voiced by Mark Bowen.

Fastidious first appeared in the episode "Neat Freak". He ran into Yin at the store "Battle, Bath and Beyond", where (after cleaning her up) he told her of his woes in dealing with the trio known as the Filth Spirits: the Wet and Soggy Spirit, the Windy Weather Spirit and the Mud and Slime Spirit. Feeling sorry for him, Yin convinced Yang to help, with the both of them thinking that they were doing good. In reality, he was using them to capture the spirits so that he could destroy them via an incinerator. Thankfully, Yang saw through his ruse and (unbeknownst to his sister) stole the Spirits and, after revealing his own deceit, freed them on Fastidious. His Hamsterbot was wrecked in the ensuing fight against the combined forces of the Woo-Fu Knights and the Spirits and, eventually, he was flushed down his own toilet. 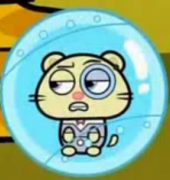 Fastidious in his hamster ball. 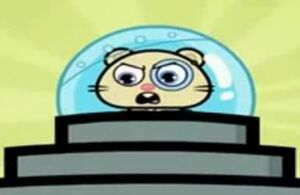