Stuart Hope, better known as the Fat Bastard, is a major antagonist of the Austin Powers film series.

He is a horrendously obese Scotsman with an insatiable appetite this grotesque henchman worked with Dr. Evil to try and take down the international man of mystery Austin Powers but failed.

He was portrayed by Mike Myers.

Debuting in the second film, Fat Bastard is a villain under employment by Dr. Evil who is hired to steal Austin's Mojo. He then brings it to Dr. Evil and gives it to him, but not before trying to eat Mini-Me. In the third movie, Fat Bastard attempted to go into a more mainstream lifestyle as a Sumo wrestler, yet even in this stage in his life he did the occasional job for Dr. Evil on the sidelines. By the end of the final movie he has lost much of his weight due to going on a diet but this has done little for his looks as he still has a great deal of excess flesh, stating that "[his] neck looks like a vagina".

Fat Bastard is a cannibal who has loudly boasted of eating a baby on more than one occasion, given his terrifying appetite this may well be true. Another famous account of his cannibalistic ways was his encounter with Mini-me when he loudly declared that the shorter individual should be devoured, though he didn't go through with his threat (however the line of dialogue he spoke has become legendary). 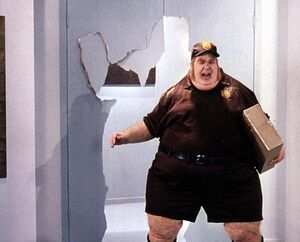 Fat Bastard disguised as a mailman.