Help Fat Cat in his plans.

Fat Cat's Gang are the minions of Fat Cat. He is usually accompanied by these four henchmen. In spite of their combined stupidity, Fat Cat almost always sends them out to do his dirty work for him, as he is too smart or lazy to dirty his paws himself.

Rescue Rangers to the Rescue Part 1

Rescue Rangers to the Rescue Part 2

A Lad in a Lamp

When You Fish Upon a Star

A Lean on the Property 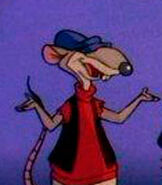 All four members with their leader, Fat Cat
Add a photo to this gallery

Retrieved from "https://villains.fandom.com/wiki/Fat_Cat%27s_Gang?oldid=3880290"
Community content is available under CC-BY-SA unless otherwise noted.