Wipe out humanity and any monster that stands in its way (ongoing).

The Fatalis are major antagonists in Monster Hunter. They are a species of Elder Dragon.

The Fatalis are a group an ancient Elder dragon who has prowled the lands since ancient times. Most originally believed that Fatalis was a myth but those who learned the truth barely lived long enough to tell the truth .It was responsible for destroying the Schrade Kingdom in a single night which it now calls the ruins its home. Many hunters have sought to challenge it and kill it, but none of them ever returned. Fatalis would melt the armor of the hunters it killed onto its scales to make it even harder to kill. Those whom have worn its armor start to slowly become mind-broken and possessed by the still-living dragon.

Fatalis's body can change due to either its location or its age. Some transform into the stronger Crimson Fatalis if they mutate or spend excessive time in volcanic regions. This version is red, can cause the blastblight status, and has different horns compared to regular Fatalis. If a Fatalis lives long enough, it can become a White Fatalis. This version is the strongest version of the three with access to thunder and create powerful storms.

Fatalis appeared as an obtainable dragon and boss in the Dragalia Lost x Monster Hunter collab event: Monster Hunter Primal Crisis. Fatalis is said to have entered the space between worlds known as the Otherworld. Despite the Otherworld's life-eroding black mana, Fatalis is resilient enough to survive in it without issue. Whenever a rift into a new world opens, Fatalis travels through it to to raze it to the ground. When it's the only life in that world that remains, it returns to the Otherworld to repeat the process.

As a useable dragon, Fatalis grants the adventurer it's equipped to a 80% strength increase if they're attuned to Shadow. However, should the adventurer shapeshift into Fatalis, they become afflicted with the Curse ailment for the duration of the quest.

Overall, the Fatalis are elder dragons with a deep hatred of humans. Its hatred for humanity is so deep that it is said that it would burn thousands of hunters and melt their corpses into it's hide to make a suit of armor much like what humans do to monsters. Fatalis are also quick to lash out on other monsters who coexist with humans, and the area that they are located are always dark, barren, wastelands devoid of any life. It is a species that both man and monster alike fear. Fatalis's presence is none to make other monsters flee in terror. Even other lesser elder dragons like Lao-Shan Lung and Teostra have been seen in different lands trying to escape from Fatalis. 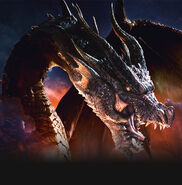 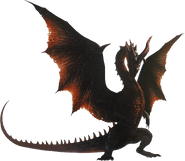