Mr. Balder
The Last Lumen Sage
Masked Lumen
Daddy (by his daughter Cereza/Bayonetta)
Descendant of the Long Lost Sages (by Enzo)
The Overseer of the Right Eye
The Corrupted Lumen Sage
The Lumen Sage

Revive Jubileus.
Kill his daughter Bayonetta (all failed).
Be killed by Bayonetta (succeeded).

Father Balder, also known as The Corrupted Lumen Sage, is the main antagonist in Bayonetta with his past as the secondary antagonist in Bayonetta 2. He was the last descendant of the Lumen Sage (representatives of Light) and the CEO of the Ithavoll Corporation, that can control angels and light and is trying to use it to lure Bayonetta (the title character and the Left Eye as well as his daughter) into reviving Jubileus the Creator.

After his death, the right eye of light was then lost from the world forever caused the world to disrupted as few demons rebelled against the Umbran Witches' masters.

He was voiced by J. Grant Albrecht.

Balder and Rosa conceived Cereza and the pair broke the tenet that kept the clans delicate balance in place. Rosa was imprisoned for the rest of her life and Balder was exiled from his clan. He was later manipulated by the forces of light into spurring on the Witch Hunts and returned to the Crescent Valley sanctuary in order to protect his love. However, unknown to him, a figure from the shadows tried to kill him before Rosa stepped in the way. In her dying breaths, Rosa pleaded with Balder to watch over their child and keep her safe from harm. As she died, Balder cried out for her as he was suddenly snatched away by a mysterious power.

Balder manifested at the top of the sacred mountain of Fimbulventr in the future where he was spoken to by Loptr. The mysterious figure said he would offer the Sage a chance at revenge for the one who killed his love and showed him where he could find the boy he thought was responsible. Donning a mask, Balder became the Masked Lumen and clashed with Bayonetta multiple times in his attempts to kill Loki.

After Balder is brought to the present and led to believe that Loki is the one he seeks for his revenge, he dons his titular mask and travels to Noatun to strike the boy down. He first appears in person before Loki as the boy is heading through a courtyard to get to Fimbulventr. Though Loki tries to use his cards to ward his attacker off, a single thrown feather from the Masked Lumen puts an end to it and the two engage in battle. Despite the boy's agility in avoiding most of his attacks, the Masked Lumen gains the upper hand and is about to strike him down until Bayonetta intervenes with a hail of bullets. Though they're easily dodged with his abilities, Bayonetta mistakes the Sage for one of Loki's 'assistants' to which the boy replies he has never seen his assailant before.

Bayonetta engages in combat with Balder and seems to gain the upper hand with a dodge and a barrage of bullets heading towards her foe. However, the Sage enters Light Speed and easily tosses aside the bullets from his palm. As he throws Bayonetta away, she realizes to her shock that he is a Lumen Sage. The pair continue their battle and eventually resort to summoning greater and greater beasts to fight in an epic duel which takes to the skies. In a final clash, Bayonetta and the Balder meet in midair and cause a huge explosion, leaving the end of the battle ambiguous as to who won.

Balder appears again after Loki and Bayonetta have been swallowed by the demon Insidious. Realising that Loki is trapped, the Sage tries to strike him down before Bayonetta once again intervenes. The two duel once more and begin to destabilize the insides of the demon as they fight, eventually ending their conflict in a stalemate after summoning both Sapientia and Hydra respectively. Bayonetta noticed the Sage carrying a lipstick container around his neck to her shock. Loki, having broken free from his bonds, launches a card and damages the Sage's mask, revealing that he also possesses the Right Eye. Insidious then explodes and separates the three of them.

Later, after Bayonetta and Loki have reached the real Gates of Hell, Balder returns with a projection of Loptr in turn and reveals his face to Loki to remind the boy of his crime. When Loki claims he doesn't know what he means, the Sage quickly resorts to violence. Bayonetta tries to intervene, but is stopped by Loptr, who insists that she fight him instead. After being pushed back, Loptr shows Bayonetta a vision of the past using the Remembrance of Time, trying to implicate Loki as the one who killed her mother. The vision also tells her that the Masked Lumen is really Balder and that he was not actually responsible for the Witch Hunts. Loki, using his quick thinking to avoid being killed, uses his cards to open the Gates and tells Bayonetta to let herself be dragged in to escape. The Masked Lumen follows them in just as the Gates close.

In Inferno, after once again being prevented from killing Loki, Balder destroys his mask and reveals his true identity. He begins to use all of his older form's abilities to try and kill Bayonetta once and for all. However, despite gaining the upper hand in their fight, Loki is suddenly overcome with a powerful energy and create a shock wave of blue light that swallow up Bayonetta and Balder together. The pair of them are transported back to the days of the Witch Hunts and Balder is able to see the truth that Loptr is actually the one who killed Rosa. When the pair return to Bayonetta's time, he resumes his former identity of Balder.

It is only when he sent back once again into the past along with Bayonetta that he realizes the truth: that Loptr is actually the one who killed Rosa, not Loki. Forming a temporary truce with Bayonetta, he returns with her to the present day and travels to Fimbulventr to stop Loptr's plan to become Aesir. Upon doing so, however, the pair of them play right into Loptr's hands and Balder loses the Right Eye to him. However, with the aid of Loki destroying the Eyes with his own powers, Balder is able to perform a giant summoning with his daughter to create a hybrid of Jubileus and Queen Sheba that sends Loptr's physical body flying into the waiting jaws of a Jeanne summoned Gomorrah.

Loptr's remaining soul attempts to use his remaining power in order to return to the spirit realm and be reborn in a new era. Before he is able to escape, Balder moves in his way and traps Loptr within himself in order to prevent his eventual rebirth. Loki warns him that Loptr is pure evil and that it will slowly corrupt him if he remains inside. Despite this, Balder is content with his sacrifice. He addresses Bayonetta as 'Cereza', revealing that he knew who she was since they met. He makes her promise that should he stray from his path, she will be the one to stop him and asks for her to call him 'Daddy' just one time. She obliges and promises his daughter that he will watch over her before disappearing back to his time.

Upon returning to his time, Balder has become corrupted by Loptr's evil and creates the damage seen in the Crescent Valley as a sign he intends to spur on the remainder of the Witch Hunts. Under Loptr's evil, Balder begins a plan to recreate the universe to rule over using the Eyes that still exist in the past. He spends the next 500 years cultivating Vigrid and its followers into following the light of Paradiso in order to coincide with the Festival of Resurrection and use Jubileus as the deity to remake reality, just as Loptr attempted when he was Aesir.

20 years after Bayonetta wakes up and travels to Vigrid to regain her lost memory, Balder tracks down and brainwashes Jeanne into luring his daughter to him. He first "appears" as a voice that refers to Bayonetta as his "dear, sweet child" and continues to speak more frequently to her after she meets her younger self, Cereza.

After finally reaching Balder on the Isla Del Sol, Bayonetta learns he is her father and that Cereza is her own past self brought here by Balder to recover Bayonetta's memories and awaken the Left Eye. After Luka shows up as well, Balder reveals to him that he was the one who ordered Antonio's death before throwing him out of the window. Balder then fuses with Cereza and fights Bayonetta as the pair of them fall from the Ithavoll Building. Bayonetta manages to shoot Balder in the forehead with Rosa's lipstick, seemingly killing him.

However, after Bayonetta is struck down by pain after returning Cereza to her own time, it is revealed that Balder survived the shot. He explains that the Left Eye's power was reawakened after the changed events of the past gave Bayonetta back all her memories. He ascends with his daughter up to the giant statue of Jubileus that he had prepared for the Resurrection and launches the statue into space as he as his daughter take their places as Jubileus' Eyes. However, Jeanne is also revealed to have survived her apparent death from her previous fight with Bayonetta and follows the statue into the cosmos after having broken free of Balder's mind control. She frees Bayonetta from the statue and Jubileus is only able to be summoned using the powers of the Right Eye. As she awakens, Balder appears to be killed by being absorbed into Jubileus' body.

It is not until after the destruction of Jubileus that Balder is shown to have survived the battle. Stumbling away from the crashed head of the Jubileus statue as it fell from space, Loptr's soul attempts to leave his body after realizing that his 'host' is close to death. Balder contains it within himself, having broken free from Loptr's corruption and with an intent to see to it that they both perish together. In his last moments with a sane mind, Balder puts on his monocle and falls to the ground. He speaks to himself about how Bayonetta has finally kept her promise to him and that he will always watch over her. Balder fades away in golden light and finally perishes, seemingly taking Loptr with him into the afterlife. After his death, the right eye of light was lost from the world forever and the Lumen Sages is now extinct.

Balder appears as a Primary Shield type Spirit. His Spirit Battle is a stamina battle against a giant Robin with increased special moves and a quickly charging Final Smash meter. At level 99, Balder can be enhanced to become his angel form, which equips the player with a Franklin Badge. 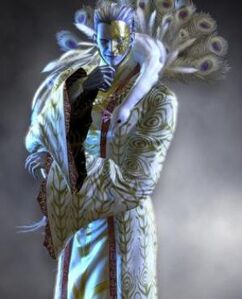 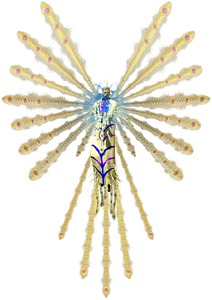 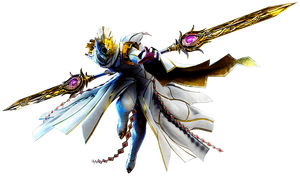 Father Balder as the Masked Lumen. 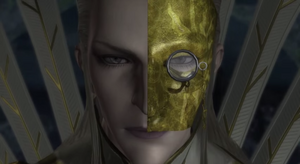 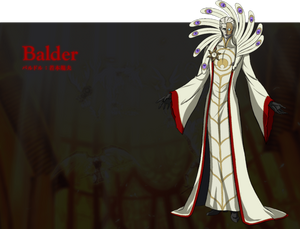 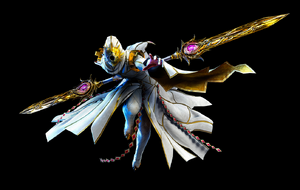 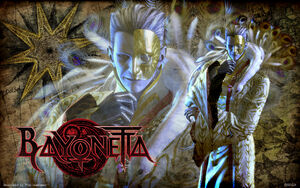 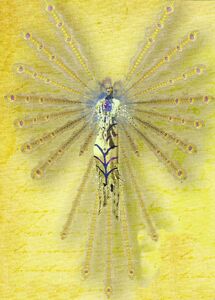 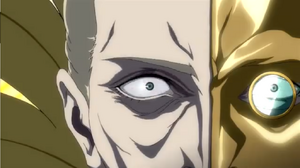 A closeup of Balder's eyes in Bayonetta: Bloody Fate. 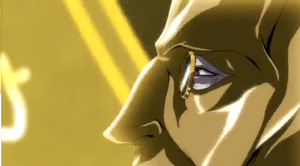 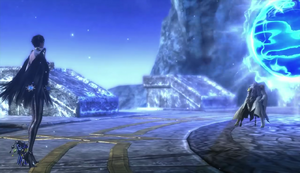 Balder sharing one last moment with his daughter.