High Priest of the Church of Night (formerly)

Dean of the Academy of Unseen Arts (formerly)
Witch

Have Sabrina Spellman follow the Path of Night (formerly, though succeeded).

Become the new Anti-Pope and have his revised testament be considered the norm (failed).
Transform the Church of Night into the Church of Judas (failed).
Get revenge on the Spellmans.
Unleash the Eldritch Terrors (succeeded).

Faustus Blackwood, otherwise known as Father Blackwood is the main antagonist in the 2018 Netflix original series The Chilling Adventures of Sabrina.

He appears as the secondary antagonist of season one, the main antagonist of season two and four and as a major antagonist in season three. He is the former high priest of the Church of the Night, the former dean of the Academy of Unseen Arts and one of Satan's most loyal followers before turning his back on his own religion after being ordered to bow down to Sabrina Spellman.

He was portrayed by Richard Coyle in his first villainous role.

Father Blackwood is a mysterious and loyal follower of Satan and a powerful witch residing in Greendale where he acts as the dark priest of the Church of the Night replacing Edward Spellman after the latter's death and also the Dean for the Academy of Unseen Arts. He is one of Satan's spokesmen and participates in bringing his master new followers and possible sacrifices. He was once a teacher and mentor to Edward Spellman and the student surpassed his instructor and took on the highest position in Satan's clergy.

After Edward died, Blackwood took over the role and proved to be more old-fashioned and barbaric than his predecessor. Blackwood attempted to restore the Church of Night to what he considered its glory days. He reinstated the Feast of Feasts and many other practices considered too old-fashioned by Edward. His rank and status made him an extremely formidable foe to any who cross his path.

Blackwood first appears after being invited over to the Spellman household in order to explain the baptism process and hopefully convince Sabrina to join the path of darkness. After answering all of her questions he advises Sabrina to take her baptism and join the academy while still offering her an exist if she doesn't enjoy the lifestyle after all.

He then helps the Spellmans examine the suspicious corpse of a young man and Blackwood confirms that a witch's mark is indeed on the corpse, he also doubts the possibility of witch hunter involvement although to ease their thoughts he tells them he'd inform the council.

When Sabrina's baptism finally comes Blackwood reads Sabrina vows and after she agrees to all of them he prepares for her to sign Lucifer's book. In the end however Sabrina cannot cope with the stress and flees the scene much to the horror of the attendees. Blackwood then orders his subjects to pursue Sabrina. Blackwood explains that while the blood moon shines Sabrina must sign the book of the beast.

After her final refusal Blackwood loses his temper and demands the weird sisters take Sabrina. He is stopped however by Ambrose Spellman's faux protection trick which Blackwood and the others fall for. Realizing his supposed defeat Blackwood simply walks away.

Zelda Spellman requests Blackwoods's help when she, Hilda and Sabrina are put on trial for Sabrina's actions and Blackwood obliges on the condition that Sabrina completely submits herself to the dark lord. After Zelda leaves Blackwood argues with Madame Satan over Sabrina and who truly failed to get her to submit. The argument goes nowhere however and the two leave.

Blackwood is the prosecutor of the Spellman trial and does these duties well and fairly although does reveal a secret of Zelda Spellman's in which she reveals that Sabrina's father promised Sabrina's soul to the dark lord.

Blackwood continues with the trial and suggests a trial to test if Sabrina is truly a mortal human or a witch by either dropping her in a river or stripping her in front of the court. Blackwood then tells the family that he asked the dark lord to go easy on Sabrina and grant her at least some way into her previous life, he tells her that to get this deal however that she must sign her name into the book.

Much to Blackwood's bewilderment Sabrina requests instead to do the stripping witch's mark search. He prepares for the court to begin before new evidence is presented which shows Sabrina's soul belongs to the light, this renders the previous course of actions redundant much to Blackwood's fury over how the Spellman family have brought disgrace to the court.

When the lengthy trial is finally concluded it is decided that Sabrina regains her mortal life but must attend the academy.

When Sabrina finally comes to the academy, Blackwood welcomes her cheerfully with open arms and attempts to bury the hatchet, he informs her that to get into exceptionally good classes she would have to first begin with mundane classes such as choir practice done by Father Blackwood's wife Lady Blackwood. After a cruel prank from the Weird Sisters Salem Saberhagen comes to Sabrina's comfort however Father Blackwood tells her that familiars are not permitted at the academy and that he would have to return home with Zelda. He then shows concern for Sabrina and asks if she is truly happy at the academy. Following a discussion with Zelda he allows Sabrina to take conjuring class should she be able to look through a configuration scope which he has been unable to solve for two years.

After several days of abuse from The Weird Sisters Sabrina gets back at them and humiliates them much to the fury of Father Blackwood who finds it disgusting that the trio could be beaten by a mere half breed and proclaims that although Lucifer wished for Sabrina's education at the academy that didn't mean she didn't have to lack any suffering.

As this series progresses Blackwood gets much closer to the Spellman family particularly with Zelda and comes around for dinner on several instances. On one of these occasions while celebrating Prudence Night's enrollment as queen of the feast for a coven tradition. While this happens Lady Blackwood begins spouting verbal slurs towards Prudence, after Blackwood continuously tells her to stop he is informed by Sabrina that in the cake everybody was eating truth potion was laced much to Blackwood's horror. He then confesses that Prudence is in fact his daughter and that her mother was a woman he refused to marry who promptly threw herself into the river. Not willing to give up an innocent child, Blackwood instead took Prudence in for himself without letting on that she was his own daughter making her think that she was an orphan.

Father Blackwood is greatly devoted to his work and is greatly loyal to Satan. He takes his work very seriously and is shown to be a rather large and intimidating figure. He occasionally is quite prone to anger but in general usually has a rather calm and commanding disposition.

Blackwood's demeanor is rather monotone and clear, making him appear as a rather authoritarian figure. Blackwood doesn't see himself, his master or any of his subjects as evil however and this is shown through his reasonably charismatic and friendly attitudes, in spite of this however he is a very stubborn and misogynistic man.

As the second season begins Blackwood loses much of his sanity and becomes a far more brutal and ruthless man in his beliefs. He also develops a furious hatred for Sabrina Spellman down to the point of abandoning Satan when ordered to bow before the girl.

Blackwood is a striking man in his forties with a thick head of short black hair tightly combed and slicked back. He dresses very fancily always wearing very extravagant and expensive formal wear, most commonly wearing a charcoal frock coat with a matching blazer and trousers, he also wears sleek, polished black boots and usually wears white cravats. He also wears a large dark ring on his left hand and has moderately sharp fingernails. He is also often seen with a black cane with a decorative hare head carving for a handle.

During ceremonies and rituals Blackwood wears golden and crimson robes over his ordinary clothing and during trials and court cases he wears a black cloak over his normal attire.

The High Priest of the Church of Night has demonstrated an aptitude for general spell-casting, particularly in the form of summoning, and utilized telekinesis. He has banished demons before and presided over other magical rituals but his greatest powers are of his mind. Faustus was a master at manipulation as he orchestrated a sexist world around himself to ensure that he not only had his way but that he remained in power no matter the cost even poisoning his own people. 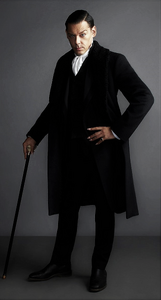