Leader of the Order of St. Dumas

Redeem the name of his ancestors and seek revenge on the Wayne family.

Father Creel is the leader of the Order of St. Dumas. He is a major antagonist in the first half of Gotham's second season and supports Theo Galavan in his vendetta against the Waynes.

As every member of his order Creel wants revenge on the Wayne family because the Waynes led to the downfall of the house of their patron saint, House Dumas.

He was portrayed by Ron Rifkin, who also played Arvin Sloane in Alias.

After talking with Detective Gordon at the GCPD, Theo Galavan returns home and is surprised to see Father Creel in his apartment. He warmly greets the man. Creel comments that Theo surrounded himself with luxury which Theo states as necessary for playing his role, remarking that it's paying off. He then presents Creel with the knife the Waynes used to cut off the hand of his ancestor, Caleb Dumas. Creel drives the blade over his own finger, remarking satisfied that it is still sharp after all the years. Creel then asks if Theo has the Wayne boy to which Theo responds that there are other matters that have to be attended first. Creel replies that after 200 years they can wait a little longer. He also tells Theo that members of the order are coming to the city, warriors as Gotham has never seen before. He longingly states that Gotham will be redeemed in blood and that Bruce Wayne will then die.

Creel is later seen welcoming his followers at the docks late at night. They are interrupted by a security guard who tells them they are trespassing, which leads to the man being stabbed multiple times and killed. Creel and his followers then make their way toward Gotham City.

Creel and his followers attack a criminal who tries to rob a woman on the streets. Creel later slits his throat, while stating that the blood of nine will wash away the sins and that Gotham will be cleansed. He and at least six followers later attack a nightclub which is located in their former abbey, killing the owner. Creel and the Order kill eight of their nine victims, until only Bruce Wayne, the "Son of Gotham", remains. Bruce later is kidnapped by Theo and brought to Theo's penthouse where he is to be sacrificed for his ancestors actions. Creeel approaches Bruce and tells him to prepare himself for the imminent fulfilling of the prophecy, to which Bruce replies by calling him a deluded old fool. However, while Creel is about to slit Bruce's throat with the Wayne Family Crest, he is disturbed by Silver St. Cloud. While everyone is perplexed, Gordon, Alfred, Bullock, Selina, Penguin and some of Penguins henchmen storm into the room which leads to a fight between the Order of St. Dumas and those who have come to save Bruce. Theo flees with Silver and Tabitha while the rest of the Order dies fighting. Only Creel remains, dagger in hand. Gordon tells Creel to drop his weapon as he has lost, to which Creel replies that it would seem so. He then jumps towards Gordon but his attack proves to be futile when Bullock shoots him mid-air, thereby killing the leader and last standing member of the Order of St. Dumas. 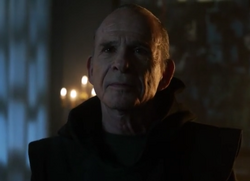 Creel spills the blood of one of the nine

Creel and the Order attack the nightclub

Bruce Wayne is brought before Creel

Creel is furious after the ceremony is disturbed 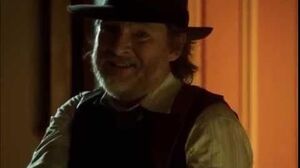