God of the Deep Ones

Rule the universe alongside the Great Old Ones forever.

Dagon, also known as Father Dagon, is a Great Old One and the consort of Mother Hydra. Together, they rule over the Lovecraftian race of the Deep Ones.

Dagon is depicted as a gigantic Deep One (around 30 stories tall) and first appeared in the short story Dagon. Since then, he and Mother Hydra have more or less been established as the official rulers of the Deep Ones, though Mother Hydra seems to gain a slightly larger following.

He also appears as the main antagonist in Call of Cthulhu: Dark Corners of The Earth. In the game, he appears to have a higher following than Hydra, and has his own cult named "Esoteric Order of Dagon" who are the primary rulers of Innsmouth and main antagonists to Jack Walters (the player character) for the first half of the game. Eventually, Jack fights and sneaks his way out of Innsmouth, alerting the FBI, Coast Guard, and Marines about Innsmouth. A combined assault was immediately launched, but the ship that Jack was on at the time (a Coast Guard ship called "The Urania") was attacked by the Deep Ones. Jack and the rest of the crew fight off the Deep Ones for a while, but eventually Father Dagon himself rises from the deep depths of the ocean and attacks the ship. In a boss fight with him, Jack uses the main cannon of the ship to launch missiles into his face while avoiding his attacks. After being shot in the face repeatedly, Dagon starts going down, but makes sure to drag the ship (and any remaining crew members) with him. It is not confirmed whether or not he died or was just knocked out. 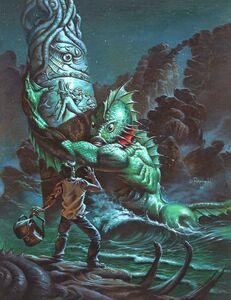 Dagon holding onto a monolith. 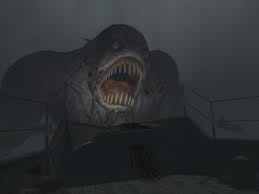