Elder of the Brotherhood of Steel (formerly)

Occupant of the Sierra Madre's Casino

Knowledge and expertise in robotics and new technologies

Looking for weapons to destroy the NCR.

Ensure that the Brotherhood of Steel achieves conquest.
Poison the Mojave with the cloud.
Kill the Courier or anyone that gets in his way (all failed).
Open the Sierra Madre's vault (succeeded).

He was voiced by the late Richard Herd.

Elijah is an altogether unpleasant and brutally pragmatic old man. He views the people around him as machines meant to do his bidding; he gives them orders and he expect them to follow them to the letter. Unable to abide by any dissent or unpredictably, he responds with fits of intense and even murderous anger when people he sees as being beneath him question or disobey him, or merely do something he did not expect them to do.

Elijah is also notably hardy, ruthless and determined. Despite his advanced age, problems with arthritis, having a smoking and drinking habit, and an addiction to Mentants, Elijah has still managed to walk immense distances on foot, staging an escape from his imprisonment at the Big Empty, fighting his way out and crashing a train to aid his escape, and has continued to evade several highly trained assassins send by the Circle of Steel, and is no pushover, should the Courier choose to confront him directly.

With his failure at Helios One, any semblance of sanity Elijah may have had once is well and truly gone. Now he is filled with rage both towards the NCR for causing his fall from grace and towards the Brotherhood of Steel for turning their backs on him, and is single-mindedly determined on enacting his revenge upon them. Believing that the technology found at Sierra Madre presents the best opportunity to fulfill this purpose, he is searching tirelessly for a way to gain control over it, no matter the costs in every resource or lives he can get his hands on.

Originally educated as a Scribe by the Brotherhood of Steel, Elijah proved to be a genius with technology, showing a savant level ability to be able to tell how a machine worked by just looking at it. For this, he quickly rose through the ranks of the Brotherhood, even gaining the rank of Elder; something highly unusual for a Scribe in the Brotherhood, but a special exemption were granted by the other Elders, on account of his genius. Elijah, however, also frequently came into conflict with the other, more conservative Elders, as he wished to improve upon technology, rather than following the Brotherhood's directives of collecting and preserving it. Meanwhile, the rank and file of the Brotherhood despised him for his uncompromising attitude and approach to leadership. In fact, the only person he had any kind of true working relationship with, was his apprentice, Veronica Santangelo. Eventually, to avoid dealing further with him, the other Elders decided to send him towards the Mojave Wasteland, as the head of a group of other Brotherhood members, with orders to founding a new chapter of the Brotherhood there.

Meanwhile, and unbeknownst to Veronica, Elijah had been personally disapproving of his pupil's romantic relationship with fellow Brotherhood scribe Christine Royce. By using his influence as an Elder, Elijah had Christine transferred to another Brotherhood chapter, thereby putting an end to her and Veronica's relationship. Elijah's act had, however, not been purely driven by personal distaste for the relationship; by removing Christine from the equation, he had ensured that Veronica grew closer to him, and would follow him on the journey to the Mojave.

When Elijah and his detachment arrived in the Mojave Wasteland, they discovered that the New California Republic had already set up shop in the area, having occupied Hoover Dam. Elijah was furious at this discovery, comparing it to "children playing with a bomb." Instead, Elijah turned his attention to the solar power plant Helios One and had his Brotherhood chapter set up their headquarters there, pouring most of his resource into getting the facility operation again. So great was Elijah's obsession with Helios One, that he chose to neglect every duty he as a Brotherhood Elder was supposed to maintain, leading him ignoring the expansion of the Van Graff family into the Mojave despite their high-profile distribution of pre-war energy weapons.

Eventually, the Brotherhood's activities at Helios One attracted the attention of the NCR's army, and they initiated a military operation named "Operation Sunburst" to drive the Brotherhood out of Helios One, and laid siege to the facility. Though the Brotherhood forces had better equipment and training, they had no real chance of holding out for very long against the NCR's resources and manpower. Many of the Paladins under Elijah quickly realized this, and tried to explain to him that their position was tactically unsustainable, but Elijah dismissed their concerns, having discovered Helios One's greatest secret, the ARCHIMEDES II weapon, with which he believed he could drive the NCR back.

As several Brotherhood Knights and other personnel starting failing to the NCR's siege forces, the Paladins started openly disagreeing and fighting with Elijah, who stubbornly refused to give any ground and kept working on ARCHIMEDES, even as the NCR prepared to storm the Helios One in a final push against the Brotherhood Chapter. When the NCR finally initiated their storm and began overrunning the facility, Elijah simply disappeared into the wastes without a warning to anyone, not even Veronica. Paladin Nolan McNamara, who with Elijah's disappearance was the new Elder by default, wasted no time in declaring Elijah a deserter and quickly rallied the Brotherhood members who had survived the battle with the NCR, ordering them to retreat to the Hidden Valley bunker complex.

But even as he abandoned his subordinates to their fate, Elijah had not truly given up on his dream of seeing the Brotherhood day triumph over the NCR and all their other foes, and once again be the dominant force in the Wasteland. With their failure at Helios One, Elijah had come to believe that the Brotherhood was doomed if they continued on their present course, and that he needed to give the organisations a fresh start by taking it over and reshaping it to fit his vision; for that purpose he would need powerful weapon technology and so he set out in search of the treasures of the Old World, hoping to find such a thing amongst them.

To the Brotherhood, however, he was a deserter and fearing both the damage he could do, as well as his knowledge and skills falling into the wrong hands, the Circle of Steel, the Brotherhood's internal affairs organisation, targeted him for assassination. The Circle would deploy several agents in an attempt to find and kill Elijah, but he proved very skilled at evading and outwitting them, and every single one of their attempts on his life ended in failure.

All the while, Elijah continued to walk the Wastes, and during his travels, he got as far as the Divide and would also spend some time among the mysterious tribals known as the Ciphers.

Upon installing Dead Money, the player picks up a mysterious radio signal advertising the grand opening of a casino called the "Sierra Madre" coming from an abandoned Brotherhood of Steel bunker near the eastern edge of the map. Once inside, the Courier is knocked out by sleeping gas that is released when they walk into the room with the radio. A cutscene then plays explaining that the Sierra Madre was designed to be the ultimate casino, but never opened due to nuclear war breaking out and has been a mythical place to denizens of the wasteland ever since.

When the player wakes up, they are in the middle of the abandoned city surrounding the Sierra Madre and are greeted by a hologram of Elijah who tells them that they have to help him break into the Sierra Madre's vault or else he will detonate the explosive collar around their head. He instructs the player to find three other people with collars like theirs: Dog, a Nightkin with a particularly severe case of split personality disorder, Dean Domino, a ghoul who used to be a lounge singer and was going to perform at the Sierra Madre when it first opened, and Christine, a Brotherhood scribe who was rendered mute and bald after being hurt by a malfunctioning Auto-Doc, and is also implied to be Veronica's estranged lesbian girlfriend mentioned earlier in the game.

Once these three are brought together, they are able to trigger the scripted "Grand Opening" event and open the gates into the Sierra Madre resort, and once inside they are mysteriously separated. Elijah then tells the player that the others are no longer necessary for the plan and actually encourages the player to kill them, but all that is required is that all three are located and accounted for before meeting Elijah in the Sierra Madre vault.

When the Courier meets up with Christine, she has downloaded the voice of the casino's previous caretaker, Vera Keyes, into herself and is finally able to tell the player the whole truth about Father Elijah, revealing that after leaving he started looking everywhere he could for new technology for the Brotherhood, and started resorting to crime and violence to achieve that end. Christine was sent by the Brotherhood to stop him and confronted him in a factory called the "Big Empty", but Elijah managed to subdue her and implant cybernetic modifications into her brain, enslaving her. In addition, Elijah is actually trapped in the Sierra Madre's vault room just outside the treasure chamber, and needs just one more person to reach it to free him and give him access to the vault. Christine wants to help the Courier kill Elijah.

Inside the vault chamber, Elijah talks to the player again through a computer screen and reveals his true plans for the Sierra Madre, which is to use its technology to take over the Mojave Desert; such as the invincible security holograms that could single-handedly take on an army of men, the vending machines that can generate supplies from thin air, and the poisonous gas cloud surrounding the resort. No longer needing the Courier's help, Elijah then activates the Vault's security turrets to kill them, but they are destroyed and Elijah is exposed and killed. Alternatively, the player can convince him to come down into the vault without him activating the turrets, but he will activate a trap in the computer files set by the founder of the casino and be trapped inside the vault forever. 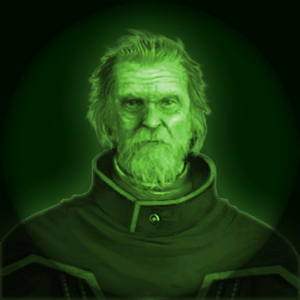 Elijah as he appears on holographic projectors.