Will
The Father
The Priest

Member of the International Association of Exorcists (formerly)

Ensure that the prophecy is prevented by any means necessary (succeeded but not in the way he intended).

Father William Kinley is a major antagonist in the TV series Lucifer, serving as the main antagonist of Season 4 and a posthumous antagonist in Season 5. He is a delusional former priest who is obsessed with preventing a prophecy that involves Lucifer Morningstar and his first love apparently bringing evil to Earth.

He is portrayed by Graham McTavish, who also played Dromos (who was possessing Kinley's body) later in the same series, Warden Ackerman in Red Dwarf, Dracula in Netflix's Castlevania, Zoran Lazarević in Uncharted 2: Among Thieves, the Saint of Killers in Preacher, Joseph Bertrand III in inFamous 2 and Loki Laufeyson in The Avengers: Earth's Mightiest Heroes.

Little is known about Kinley's life before he became a priest in Rome. However, once he did and then became a member of the International Association of Exorcists, he came across a prophecy which foretold that once the devil walked the Earth and found his "first love", some form of evil will then be released. Since then, he has become dangerously obsessed with preventing it from happening, believing he can save the world. At some point, he found out that the Lux nightclub owner Lucifer Morningstar was the actual devil and started to plot his return to Hell.

During 2018, Kinley met L.A.P.D. detective Chloe Decker and learned that she saw Lucifer's true "devil-face" after the death of Marcus Pierce. He then told her that he is the embodiment of evil throughout history and that the association was watching him for some time, convincing her to help return him back to Hell. The two of them then arrived in Los Angeles where he continued to "encourage" her that it was for the best.

Later, he gives her a vial that would sedate Lucifer so they can perform a ritual that would successfully return him to the underworld. Eventually, he learns that she changed her mind and was unwilling to accept her words that he is not the evil monster that history says he is. Realizing that she may be the true love that the prophecy spoke of, Kinley arrived at Lux to tell Lucifer that she came to Rome to send him back to Hell, slowly rippling his trust in her. Kinley then started manipulating three murders to draw the Lucifer into revealing his devil-face.

Later, Lucifer visits him in a church to tell him that he's wrong. Kinley then lied to Lucifer and told him that a different priest explained a ritual to Chloe that would imprison the devil within Hell for all eternity. He then explains to him that the vial would sedate the devil and kill any normal man. As Lucifer left slightly distrusted, Kinley then told an vicar that he was devil and that the prophecy was real.

Eventually, Lucifer found the killer but then learnt about the plot to unveil his face and refused to, only for the killer to commit suicide. Secretly, Kinley had it on tape and showed the archbishop how Lucifer was the devil. However, as Chloe arrived to hear his disbelief, she learns that he lied about the church being in on his mission. As he attempts to convince her to rejoin his campaign, she arrests him just as the vicar agrees to testify, calling Kinley a sick man.

Whilst in a holding cell, Kinley was visited by the vicar and asked him if he had changed his mind, only for him to learn that the church has excommunicated him. He, however, feels confident that since he pushed Chloe and Lucifer apart, it would stop the prophecy from happening. The vicar then voices his doubt about whether or not Chloe really was Lucifer's true love, and just as he left, Kinley stuck with his suspicion that she was since there's no one else.

Within the next few months, he repeatedly contacts Chloe to get her to visit him, only for her to rightfully refuse. Eventually, as Kinley was nearing his return to Rome to face trial, he was finally able to successfully convince her to visit him. As she does, she tells him that he is wrong about Lucifer being evil and that he is a good man, even maybe an angel. However, Kinley blatantly tells her about the prophecy he is secretly obsessed with, and how it may refer to the original sinner Eve, not her.

As Lucifer's devil form was taking over him due to self-hating, Chloe has Kinley transferred to the holding cell just in case. However, during the transfer, he was broken out by Eve and Mazikeen and brought to the latter's home. He realizes who Eve was and that the prophecy was in fact real. He then overhears Eve trying to figure out how to retake Lucifer's love, and Mazikeen trying to convince her to accept that he doesn't love her.

Using Eve's obsessive love as an opportunity to fulfil his self-proclaimed purpose, Kinley suggests to Eve that she should take Lucifer back to Hell so they can rule as king and queen. He then convinces her that he needs a reason to go back, and suggested bringing the demons to Earth to do so. She agreed, but just as she untied him, Kinley ambushed her and attempted to kill her in order to prevent the prophecy from happening. However, Eve was able to use one of Mazikeen's hidden knives to stab him in the neck.

As Kinley begin to bleed out from his wound, Eve tells him to pass on the message to the demons so that tey can bring her and Lucifer back to Hell. Kinley however asked why she believed he would be going to Hell, in which she coldly replied that it was just a hunch. He then succumbs to blood loss and dies from his wound. Shortly later, Kinley's body became possessed by the demon Dromos, proving that Eve's hunch was correct and he would be spending the rest of eternity being tortured for his crimes.

Kinley is an example of a villain who is the "hero of his own story". In his fanaticism, he believes he is genuinely protecting the world from evil and that everything he's doing is for the greater good. As a result, his arrogance has led him to engage in conspiracy to both murder and manipulate those around him in the name of stopping the prophecy which he is obsessed about. He has demonstrate that he is most capable of lying to Oscar get him to kill former Los Xs members; the first victim was a former drug addict who later proved to be clean via a drug test a week before her murder. His obsession with the prophecy proved to be his downfall that given his multiple attempts to justify his actions, he cannot see what he's done is wrong and both his arrest and ex-communication from the church was a result of his delusions. According to Maze, Kinley is difficult to reason with and like all fanatics who follow a false belief, there is nothing that anyone could say or do to him that'll change his mind. Ultimately, he gets a taste of humility after he is fatally wounded by Eve when he tried to kill her and she declares that he could deliver a message to Hell: he asks why she thinks he will be going to Hell, only for Eve to reply as a just a hunch. In the end, while Kinley wasn't outright villainous and genuinely wanted to do good, it was his fanatical delusions and paranoia that made him like the evil he was trying to fight and even ironically brought forth the very prophecy he was trying to prevent. 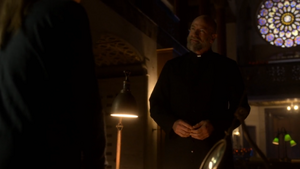 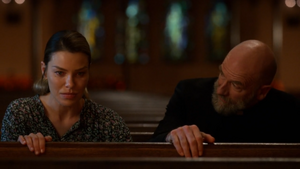 Kinley meeting with Chloe in a church. 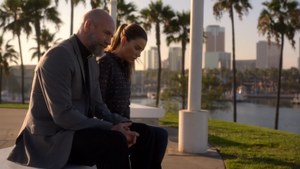 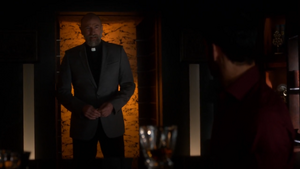 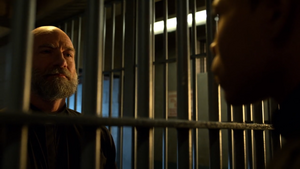 Kinley learns of his excommunication. 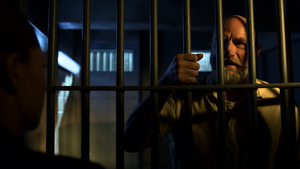 Kinley tells Chloe about the prophecy. 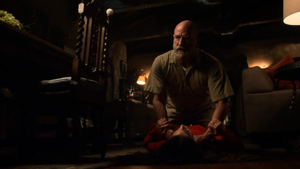 Kinley attempting to kill Eve, moments before she stabs him.