Manipulation (as a human)

Praying (as a human).

Abusing Jessica Grey (as a human).
Tormenting Blake (as a demon).

Rape and kill Jessica Grey (succeeded; as a human).

Kill Blake (as a demon).

Father Loutermilch is a major antagonist in the 2017 survival horror video game Outlast 2, serving as the main antagonist of the school segments in the game. He was a teacher at the school attended by Blake, Lynn and Jessica. It is implied he raped and killed Jessica Gray by pushing her down the stairs, then staged her hanging as a suicide.

He was voiced by Karl Graboshas.

Father Loutermilch can be seen variously throughout Blake's hallucinations laughing, singing, speaking and taunting him. After some time passes, Blake starts to see Loutermilch as a demonic creature.

When Blake approaches a well in the village, Loutermilch uses his demonic tongue to pull him in. After Blake winds up Jessica's music box and finds her corpse being hanged, Loutermilch appears and drags Jessica through the ceiling. In another hallucination, Blake roams a long, dark hallway, when all of the lockers start to open and close violently, as Loutermilch is heard across the hallway. When Blake approaches the exit door, he appears and throws him to the end of the hallway. Blake then unknowingly appears inside a locker. Father Loutermilch in a brief moment stands in front of the locker, then walks away.

Later on, Loutermilch can be heard singing a song along with Jessica. When Blake returns, a phone can be heard ringing inside one of the offices. As Blake approaches, the demon walks out and runs for Blake. Blake tries to hide, and the demon disappears. Returning back, Blake picks up the phone and a voice can be heard saying that he will get help if he finds a place to hide. He then says a lustful comment until insulting Blake as a tongue appears on the phone, taking Blake by the neck. Blake then throws the phone down, and the tongue disappears. When Blake exits the office, all doors close violently and the demon appears again, chasing after Blake.

In a next hallucination, Blake walks under the school, in a hallway system where all the pipes and cables are located. He finds his way through a corridor, when Loutermilch appears and chases him.

As Blake is rowing down a lake, the tongue reaches out of the water and pulls Blake back into the hallucination. He has another vision of Loutermilch chasing him, this time he is in the school's swimming pool. He finds his way up the stairs, where another he chases him again.

Now finding himself in the school library, Blake makes his way through the confusing maze of shelves, when the demon appears at the end. When Blake hears Jessica screaming, he turns around and runs for her, with the demon right behind him.

After Blake falls down into a pile of bodies, he lies on top of Jessica on the stairs. She is visibly beaten, and her neck is broken. We can see the demon on the top of the stairs looking down at Blake. Blake runs around the school, Loutermilch taunting him.

The status and whereabouts of Loutermilch after these horrific events are unknown. 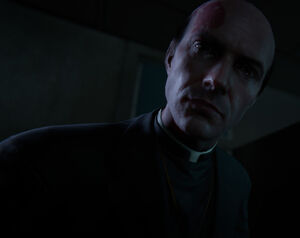 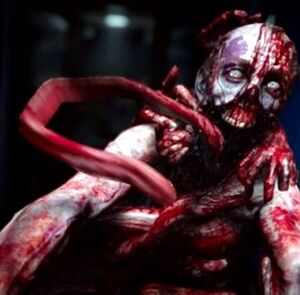