Leader of the Solarii Brotherhood

Punishing his followers.
Killing those who refuse to join the Solarii Brotherhood.
Attacking nonbelievers.
Worshipping the Sun Queen.

Transfer the spirit of the Sun Queen into a new vessel so he and his followers can escape Yamatai. (failed)

Father Mathias is the leader of the Solarii Brotherhood who and worships the Sun Queen and the secondary antagonist of the 2013 reboot videogame Tomb Raider 2013.

He was voiced by Robert Craighead.

Mathias has been stranded on Yamatai for years which is still unknown however, it is said he was stranded with other survivors until he tricked them into trying to escape with a makeshift raft which was easily destroyed however Mathias did this on purpose so he could better understand the supernatural occurrences of the island.

Over time more survivors were stranded on Yamatai, American, Russian and Japanese. Using his charisma, Mathias is able to rally people for his tribe which he names the Solarri Brotherhood however the people who refuse to join him he simply killed. The people who wish to join were forced to spend days and even months in the geothermal caverns, they either survived or were turned insane. Over time Mathias had 4 Russian lieutenants Dmitri, Nikolai, Vladimir and Boris.

Father Mathias comes across Sam, a surviving member of the shipwrecked Endurance, they come across Sam's closest friend Lara Croft. While Sam tells the story of Himiko who is also her ancestor, Lara falls asleep and when she wakes up Mathias kidnaps Sam.

Although he is not seen until later in the game, Mathias is mentioned by his Solarri brethren who refer him as Father Mathias. He is not seen in person until he ambushes Lara while she was trying to rescue Captain Jessop who is the only survivor of an attempted rescue from a plane. He describes Lara as a child and chastises her for being young and naive before destroying the bridge and murders Jessop before the Solarri Brotherhood can kill Lara the Oni which is a mythical force on Yamatia that protects the Sun Queen, attacks the Solarri and take Lara to the room where they keep the rest of their murdered victims.

The Solarri and Mathias are held up in a massive Japanese monastery as well is Sam. Lara fights through a Shantytown and finally makes her way their where she also discovers James Whitman who was another survivor. Sam pleads him to reconsider but Mathias is too determined to survive and leaves Sam with a guard which Lara kills with ease and allows Sam to escape.

While the temple begins to slowly burn to the ground Lara fights her way through more Solarri and one of the Russian lieutenants however she is easily able to kill them. While trying to exit Lara is once again ambushed by Mathias on a bridge, he commands the bridge to be burnt and when someone responds that their own men will die he simply shoots him without a second thought. Lara came close to being killed but Roth was able to call a chopper that saves Lara from a fiery death. However due to the supernatural weather on Yamatai the helicopter was brought down near the temple, Mathias and a group of his Solarri ambush the two, Roth is able to fend them off but not before Mathias hits Roth on the back with a hatchet.

Mathias is able to strike a deal with James Whitman, a narcissistic and self-absorbed survivor of the Endurance Whitman hands Sam over to the Solarri but not before Mathias purposefully has him killed by Storm Guards, an ancient race that protects the Sun Queen. Mathias barricaded him and his Solarri inside the temple of Himik but Lara is able to enter during a massive blizzard but she is too late and the ritual has already begun. Lara fights off an army of Solarri and the Oni until she reaches the ceremony however she is ambushed by Mathias and the two violently fight until she is able to steal two guns and shoot him off the edge of a cliff and he falls to his death.

Mathias' isolation on Yamatai has driven him to insanity, he will do anything for his freedom no matter how ruthless, unethical or how many lives it will cost. Despite his obvious derangement Mathias possessed a high intellect as he was the first to realize that the island they were stranded on had a supernatural element and sacrificed his own survivors to just prove his theory. His madness was also shown in his incredible worship of Himiko the Sun Queen, Mathias built shrines and sacrificed people in Himiko's honor, he expects the rest of the Solarri to believe in and those who do not he would simply kill without a second thought. Mathias presented a friendly and trustable appearance, he hid his insanity well with his charisma and beliefs but the second someone would disappoint or fail him Mathias returned to his cruel ways. Mathias justified his many wicked deeds by saying he did it only to survive which he believes is an excuse for repeated sacrifice and murder. 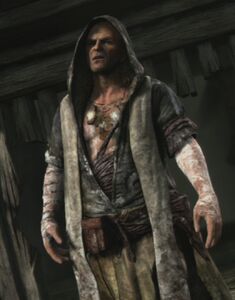 Father Mathias
Add a photo to this gallery

Retrieved from "https://villains.fandom.com/wiki/Father_Mathias?oldid=4203938"
Community content is available under CC-BY-SA unless otherwise noted.