Knowledge of the Bible

Various depending on the episode

Causing an attack of Ghost Pirates

Refusing to admit his own sins
Propaganda
Oppression

Father Maxi, also known as Priest Maxi, is a recurring character in the long running adult animated series, South Park. He is a local Roman Catholic Priest and a Christian fundamentalist in the South Park Church. He serves as the mouthpiece for the local Christian community of South Park and often switches from a regular supporting character to an antagonist depending on the episode.

In "Korn's Groovy Pirate Ghost Mystery", he is responsible for the Pirates' attacks. He is also shown to believe that all sinners and mentally disabled people are going to Hell.

In "Do The Handicapped Go To Hell", he replies that Timmy will go to hell. In that very episode, he also attacks Eric Cartman. He has slept with many women, including Liane Cartman. Despite being religious, he barely even knows who Jesus is. In fact, he thought that he was the guy who was on the access cable channel. In another episode, he tries to convert Big Gay Al into being a straight man.

Maxi is a smug, arrogant, presumptuous, and snobbish person who doesn't care about anybody that is different. For instance, he tells Kyle that he is going to hell without any question because he is Jewish. He is rude, obnoxious, disrespectful, and vituperative to all people, and will not admit his own sins. However in Red Hot Catholic Love, his last major role in the series, he seemed to have become more compassionate and showed genuine concern for the child rape victims and the corruption within the Vatican and acted far more like a man of faith near the end.

In "Red Hot Catholic Love", he points out the horrors of child rape and managed to stop a conspiracy within the Vatican revolving around child molestation and a giant spider, and managed to restore the faith of those affected by the recent child rape news. 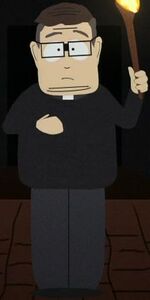 Priest Maxi aka Father Maxi.
Add a photo to this gallery

Retrieved from "https://villains.fandom.com/wiki/Father_Maxi?oldid=3492609"
Community content is available under CC-BY-SA unless otherwise noted.