Villains Wiki
Register
Don't have an account?
Sign In
Advertisement
in: Mature, Kimetsu No Yaiba Villains, Manga Villains,
and 25 more

Father Spider is the head of Spider Family and the secondary antagonist in Natagumo Mountain Arc.

He is voiced by Tetsu Inada

Father spider appears as responsible member of his family, and while was protecting his "daughter" from Inosuke and Tanjiro, he often used to beat up his "wife"

The past of Father Spider is unknown While Inosuke and Tanjiro trying to kill Sister Spider, she calls Father spider for defending her. They started fighting at little river. Tanjiro pressed the demon on with a tree and was trying to cut off his neck. Father Spider got up and hit Tanjiro by this huge tree. Tanjiro Kamado pull out the fight and leave Inosule alone with Father Spider

Inosuke got angry because he could not kill the demon and he started trying to cut father's arm of hard. After a lot of attempts to do this, he successfully cut the demon's limb off. Suddenly Father Spider ran away and climbed on a tree. He started to transform into a more powerful form and shed his skin. He broke Inosuke's swords and take his head at the fist. Inosuke was at the limit and was ready to die, but here appears Giyu Tomioka and cut off the demon's arm, then his head easily.

Durability: attacks of Tanjiro and Inosuke did not deal damage for Father Spider

Metamorphosis: Father Spider could make a shield, in this form he had more powerful strength and regenerative powers 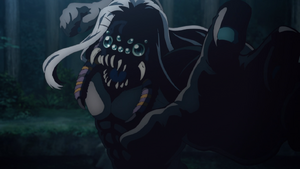 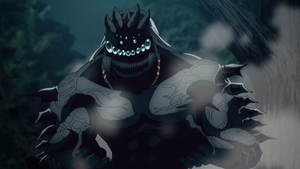