Priest of The Order

Father Vincent (real name: Vincent Smith), better known as "Vincent", is a villain turned supporting protagoinst in the videogame Silent Hill 3. He is a young priest of the religious group called The Order, based in the town of Silent Hill. He is part of the Order's Sect of the Holy Woman, and is in opposition to the priestess Claudia Wolf, who wants God to be born into the world again to usher in Paradise for all mankind.

He was voiced by Clifford Rippel.

After the events of Silent Hill, the Order fell into a period of inactivity. It was partly through Vincent's financial aid that the Order was reorganized. He was rumored to be using church money for personal pursuits and was accused of forcing donations from the congregation. He feared God and his faith was absolute, but he was opposed to bringing her into the world. He did not want Paradise because he was content with this world's pleasures and wanted to find his happiness here. He saw Claudia's father Leonard abuse her as a child and suspected that was her true reason for wanting to summon God. Vincent gestures frequently while talking, and can be quite deceitful.

When Vincent learned that Claudia had tracked down Heather Mason, the child picked up by Harry Mason at the end of Silent Hill, and planned to use her to birth god, just like Dahlia tried with Alessa, he quickly moved to oppose her.

He meets Heather for the first time in the Otherworld version of Hilltop Center office building. He introduces himself and tells her that he is on her side, but he is acting very mysteriously and his intentions are not entirely clear to Heather. The longer Heather talks to Vincent, she believes he is on Claudia's side and leaves the room. Later he tells Douglas Cartland that if they he and Heather are planning to go to Silent Hill, Heather should visit the Brookhaven Hospital to find Leonard Wolf, who keeps the Seal of Metatron and is a patient there. Vincent believes that the seal has the power to prevent God's birth. He uses Heather for his goals because he dislikes getting his hands dirty. When Heather is inside the hospital and Douglas went to Leonard's house, Vincent meets with Claudia inside Jacks Inn and mocks her for ther fanaticism and tells her that he saw what Leonard did to her when she was a young girl and her desire to birth God is nothing more than a a desire for love that she never had. When Heather returns to the motel, she meets Vincent who tells her that the church is on the other side of the lake just beside the Lakeside Amusement Park and she will find Claudia there and Douglas already went there.

Later, Vincent meets with Heather in the Otherworld church's library. He is relieved that Heather has found Seal of Metatron. He also scares her that all the monsters in the chapels she has been killing are not the monsters but the real members of the Order but then he turns it into a joke. Just before his death he confronts Claudia and mocks her faith. She then stabs him in the back as he turns to speak to Heather to finally kill Claudia. Not yet dead, he calls to Heather to use the Seal of Metatron. Claudia laughs, informing him that the seal alone cannot stop God. Claudia then stabs Vincent once more, this time in the heart. Vincent dies believing he has failed as Claudia began to shortly pray for her former fellow cult member's soul, saying "But God loves even you". Heather is shocked that Claudia killed Vincent and tells to herself that even though she hated him he didn't deserve to die. 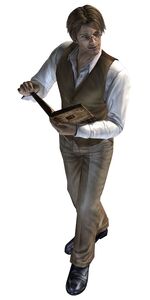