She was portrayed by Barbara Carrera.

Fatima Blush is Number 12 in the SPECTRE hierarchy and the henchwoman of main antagonist Maximillian Largo. She is deadly and ruthless, and even comes close to killing Bond three times.

Fatima first appears when she attends the SPECTRE meeting and is tasked with killing Jack Petachi. She encounters Bond, while dressed as a nurse, and later murders Jack by throwing a snake into his car and blowing it up.

She stays at same hotel as Bond and arranges an "accidental" meeting. She sleeps with him to keep him occupied while SPECTRE thugs arrive at his hotel room, and then kidnaps him at gunpoint. Bond escapes, however.

In her final scene, she corners Bond and forces him to write down that she is the best lover he ever had. However, Bond secretly uses his exploding pen and shoots Fatima with it, blowing her up. 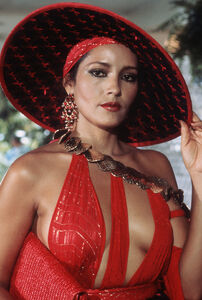 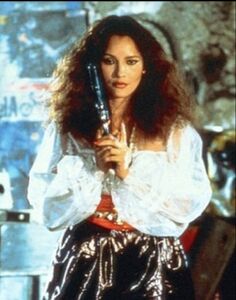