Agent for the Patriots

Fatman is an explosives expert that was part of Dead Cell and a major antagonist in the video game; Metal Gear Solid 2: Sons of Liberty.

He was voiced in English by the late Barry Dennen, and in Japanese by Kōzō Shioya.

Even when he was young, Fatman was interested by bombs and often hung out at his father’s clock store. He quickly developed an obsessive fascination with mechanics and time and when he was ten, Fatman built an atomic bomb using a guide he found on the Internet, becoming somewhat famous. However he was despised by everyone at his school, resulting in his having an intense desire for attention. Fatman did become somewhat infamous amongst his classmates for sometimes bringing a gun to school. He sought a career in bombs and eventually transferred to Indian Head in New York. There Fatman was trained by Peter Stillman, a former bomb squad member for the New York Police Department.

Stillman taught him everything he knew, hoping that Fatman would use it for the good of others, and treated him like a son. Despite this and the fact that he had amazingly high marks in his class, Fatman rejected the rules and grew hateful of Stillman. He eventually became part of NEST, but his mentally unstable behavior made him lose his job. Fatman finally joined Dead Cell as a bomb expert, creating explosives used to train government agents by simulating terrorist attacks. He was never able to keep his hands idle and developed the habit of keeping his hands soft and smooth like that of a woman, often getting manicures.

The Fatman spent his spare time assembling and disassembling his Glock 18 pistol and also found a fondness for skating. However he had no loyalty to Dead Cell or their leader, Colonel Jackson, and after most of the unit was terminated, the Fatman wasn’t bothered at all. In fact, he was pleased, since he felt free to become the “Emperor of Explosives”.

Fatman eventually aided in the Sons of Liberty’s takeover of the Big Shell facility and planted explosives all over it, so as to distract people from the main bomb in the core of Big Shell. Stillman was called in by the SEALs to help in dealing with the bombs and with help from Raiden and Solid Snake, he apparently disarmed them all. However Fatman had tricked Stillman, planting two larger, undetectable bombs and programming them to be activated when the smaller explosives were disarmed. Raiden managed to disarm one, but the other went off, badly damaging part of the Big Shell facility and killing Stillman.

Fatman eventually faced off against Raiden, saying he liked a punctual man, and introduced himself, calling himself the greatest humanity had to offer and the lowest. Fatman went on to say that life was short and bombs told the time with every moment they existed. Raiden said if he destroyed the Big Shell facility, the Sons of Liberty wouldn’t get their ransom (which he’d been lied to about). Fatman replied that he had no idea what he was talking about and began laughing when he realized what was going on. Fatman said his ambition was the simple desire to be the greatest bomber ever and Raiden said no one was going to know about him.

Fatman replied that he would be known as the man who took down Stillman and Raiden said he never beat Stillman. Fatman just laughed and said he died a dishonorable death when Dead Cell was liquidated, saying only those with the right stuff survived. Raiden replied that he would only be remembered as a common criminal, to which Fatman snarled that he was an artist before engaging Raiden. Despite having to deal with fighting Fatman and deactivating his bombs, Raiden managed to defeat and mortally wound him. As he lay dying, the Fatman noticed an internal bloodstain on his suit and said he had nothing left to wear to the party. Raiden said the party was over for him, but Fatman activated the detonator for the biggest bomb in the facility. Raiden tried to destroy the detonator but Fatman said that it was useless and there was no stopping the countdown. Raiden demanded to know where it was and Fatman refused to tell him, but assured him it was nearby.

He asked Raiden if he thought he could find it, saying it would destroy the entire facility if it went off. Fatman declared that he would die there and become a legend, before finally dying. However the bomb he was talking about was hidden right underneath Fatman and Raiden managed to find and deactivate it. Revolver Ocelot eventually revealed that Fatman was a knowing agent of the Patriots, designed to test Raiden's abilities as part of the S3 Plan, which he had taken on so that he could defeat Stillman.

While Fatman is incredibly intelligent, he is mentally unstable, sadistic, and psychotic, enjoying causing destruction and taking pride in his more evil actions. This may be due to the fact that he was neglected by his parents and bullied by his fellow students. Fatman also has a compulsive obsession with timing and mechanical precision and is rather egotistical, calling his work an art. He prefers doing things on his own and hates answering to anyone, despising Stillman despite the fact that he treated him like a son. The only reason Fatman worked with the Sons of Liberty was so he could have the chance to outdo Stillman and he is perfectly willing to endanger his allies.

Fatman is an expert in bomb creation and his field has prompted him to often wear a bomb blast protection suit that is also designed to protect him from impact. Fatman’s suit can also help keep him from being harmed by other attacks and has a cooling system within to alleviate his body heat if he has to wear it for long periods of time. Fatman gets around using inline skates and the fact that he can skate while wearing his heavy suit shows great agility on his part. He also uses a Glock 18 pistol.

Fatman being mentored by Peter Stillman. 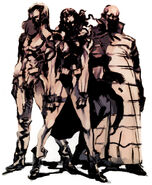