Take control of all nations in Teyvat and attach the entire continent to the Tsaritsa's domain (ongoing).

Defeat The Seven and steal their Gnosis to empower the Tsaritsa so she can lead a rebellion against Celestia (ongoing).

The Fatui (Fatuus for a singular member), also known as Diplomats of Zapolyarny Palace and Diplomats of Snezhnaya, are a corrupt and malicious delegation of "diplomats" hailing from the Zapolyarny Palace in Snezhnaya under the command of the Tsaritsa of Snezhnaya and are led by the Eleven Fatui Harbingers, and are one of the two main antagonistic forces in Genshin Impact alongside the Abyss Order, serving as one of the most constant threats to the Traveler and to the entire world of Teyvat. They also appear as the main antagonists in the supplementary manga.

They, unlike the Abyss Order, are an organization utterly controlled and composed of humans and are more well-organized economically, militarily and politically. The Eleven Fatui Harbingers who each control a certain division inside of Fatui to fulfil their mysterious and sinister missions given by the Tsaritsa and are scattered across all of the Teyvat continent, using conspiracy movements to infiltrate inside of the nations' governments so they can plant their seeds of corruption in an attempt to control the affairs of all seven nations of Teyvat.

The Fatui is described as an overwhelming military force in terms of power and numbers in the world of Teyvat that makes it the strongest of all the seven nations in Teyvat, and are widely distrusted, feared and despised by all other nations. The organization is mostly composed by combatants rather than politicians and merchants for an organization who proudly call themselves as "diplomats".

Hailing from the frozen lands of Snezhnaya, the Fatui are publicly seen as a political department of Snezhnaya that represents the good will of the Tsaritsa and manages the foreign affairs with all other six nations, often using economical means and fair trade movements to first engage with other governments in order to safely insert their influence inside of the nations' center of power. Once they have near full control of the government and capital, the Fatui ceases being the once-friendly and diplomatic group and starts using corrupt and violent means to get what they want, putting abusive taxes and inhuman demands that naturally will always cost the lives of civilians on the process.

Despite their public façade of a benevolent group that seems to engage with merchants and politicians with friendly proposals, their infamy is already too obvious for the Fatui to keep hiding their true colors from the people and are now widely viewed as a threat to all nations. The Fatui are experts in the field of economics, defense and policies and will use any modern ways to have full control of all nations of the world to further the Tsaritsa's "perfect world".

Despite their loyalty to their queen, many of the Fatui's underlings themselves are unaware of the Tsaritsa's true plans and no one dares to question her true motives. The only one so far that comes closer to know the Tsaritsa's true purposes may be La Signora who is directly in charge of gathering the Gnosis of the other Archons of Teyvat. Despite their good organization, the Fatuis are divided in divisions which each group is headed by one of the Eleven Fatui Harbingers, therefore the groups don't have any contact and relations with each other once said groups isolate themselves in different regions of Teyvat to complete their tasks.

While the Fatui are widely distrusted, hated and feared by the people of Teyvat, in-game, it's presented that many grunts are actually normal workers (all of them being from the staff teams) and are unaware of their superiors' true intentions once they are limited to only follow their orders while their military is fully composed of trained troops who ruthless killers in their ranks. Moreover, when said underlings try to be presented as "evil" they ultimately fail to even become a suspicious enemy.

The Fatui seems to be the group controlling the Northland Bank, a national bank founded in Snezhnaya, opened a bank in Liyue and has become the favorite bank of Teyvat probably due to their openly illegal activities. As a neutral department, the Fatui often uses the bank as a mask to cover their operations and will more likely use the branch as their center of intelligence to command their operations across the region.

The supreme leader of Fatui as well as the ruler of Snezhnaya, the Cryo Archon and one of The Seven. As the Empress of the country, the Fatui, specifically the Eleven Harbingers answers directly to her and vowed to fight and die for her at any cost even if it costs the lives of countless innocents from Snezhnaya and even other nations, implying Fatui are more than willing to wage war at any moment for her.

Despite the Fatui's loyalty to her, Dainsleif calls her to be a god with no love left for her people while her own people not affiliated with the Fatui only seems to adore her out of fear. 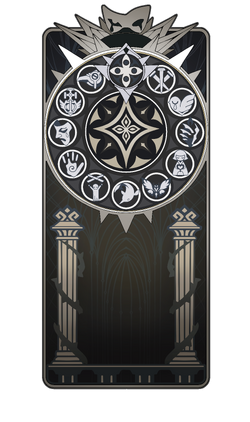 The Eleven Fatui Harbingers are the top echelons of the Fatui and the Tsaritsa's most powerful lieutenants of her country who have been given absolute authority and also have had their abilities boosted with the Cryo Archon's own power, giving them enough power to face Archons themselves. This makes them even more powerful than a normal Vision wielder, who are already far more powerful than an ordinary mortals. Each Harbinger leads their own division within the Fatui.

When an individual becomes a Harbinger they immediately also become wealthy enough to literally buy anything in the world of Teyvat and are recognized as powerful members of Snezhnaya high society. Since their wealth is private, the Harbinger is allowed to do anything they want with their own currency even if it's going to be used in trivial things like buying an extremely expensive gift for a friend or relatives. When members of the Fatui have proven themselves in their own strength in combat, the Harbingers chooses them to become their direct subordinates of the Tsaritsa of Snezhnaya.

According to Oz, their wickedness knows no bounds.

Government agents serving the Fatui from the shadows. The duty of a Fatui Agent is to settle debts — but not only those of a monetary or goods-in-kind nature.

They also ensure dues are paid when it comes to the principle of "an eye for an eye". If there is one thing the Fatui are not known for, it is leniency, and whoever dares to oppose them will invoke the full force of their wrath upon them.

Fatui Agents are mercenaries skilled with multiples skills of assassinations, mainly in stealth movements and are users of multiples Sacrificial Knives that are similar to elemental daggers to conduct their pyro Vision.

The Fatui's mysterious all-female mages control bat-like creatures called Cicins. So far, only Cicin Electro and Cyro Mages were found in-universe. A Fatui Mage who can command Cicins in battle. Similarly to the way Electro Cicins go crazy for Mist Grass, Cicin mages take great pleasure in toying with their prey. They seem to wander the land aimlessly, as if compelled by some unknown duty.

Alongside pyro agents, the Cicin Mages are among the most numbered agents of Fatui across Teyvat but their purposes are unknown besides sometimes serving the Harbingers with their personal most vital quests. Unlike other Fatui members, Cicin mages are mentally unstable and show psychotic behavior like wandering around the land like childish lunatics and laughing insanely while in combat. Likewise, the reason why Cicin Mages present such odd behavior for a Fatui army is unknown.

Currently, the Fatui Cicin Mages come in two variants: Electro and Cryo, both are capable of generating an Elemental Shield for defense. 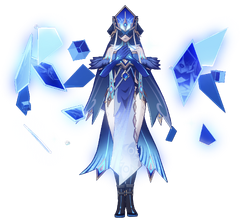 Mirror Maidens are honor guards of Snezhnayan that command Hydro Mirrors in battle. They are willing to do anything to achieve the grand goals of the Fatui, stark opposites of their "maiden" title. Their posture is highly dignified, as if they are worshiping a god.

The Hydro Mirror manipulated by Mirror Maidens lures those enchanted by them to willingly fall for their illusion. Nothing seems to escape their ears. No one knows what those covered eyes have seen or what kind of obsession might be reflected in them.

Mirror Maidens are currently only located on the islands of the Inazuma nation. 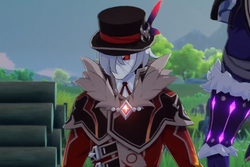 The Fatui Skirmishers are foot soldiers that compose the spine of Fatui's army, usually being the front line of the organization's military might. A skirmisher is a soldier encased within a Fatui war machine. These skirmishers do not question if they shall live or die as they advance into nations far from home to complete advance missions and lay the groundwork for operations to come.

Unlike the elite Mages and Agents, Fatui Skirmishers are soldiers of lesser individual might. To complete their tasks and reduce losses in men and materiel, their tactics are thus more reliant on teamwork.

All Fatui Skirmishers are capable of generating an elemental shield, which boosts both their offensive and defensive capabilities. With the exception of the Anemoboxer Vanguard, once their shield is broken via through elemental reactions, they will become compromised and stunned, leaving them vulnerable for a short period of time.

The Skirmishers come with different variants, all have their own varying abilities:

The Geochanter Bracer is voiced by Stefan Martello in the EN dub.

The Pyroslinger Bracer is voiced by Thomas Bello Rivas in the EN dub.

The Cryogunner Legionnaire is voiced by Dan Foster in the EN dub.

The Hydrogunner Legionnaire is voiced by Michael Schwalbe in the EN dub.

The Anemoboxer Vanguard and Electrohammer Vanguard are both voiced by Dan Foster in the EN dub. 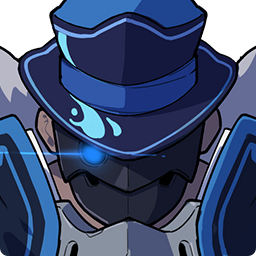 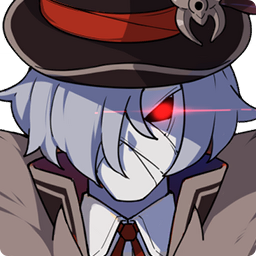 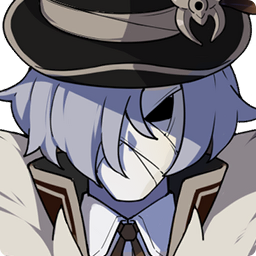 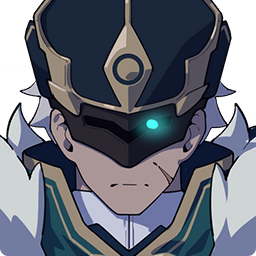 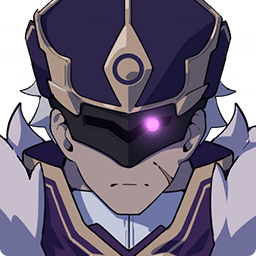 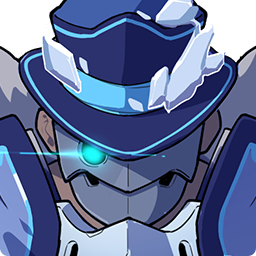 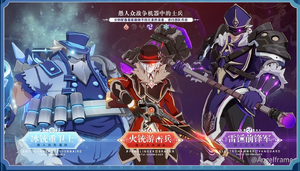 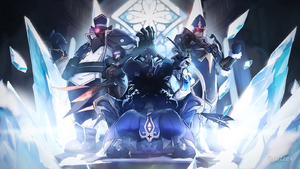 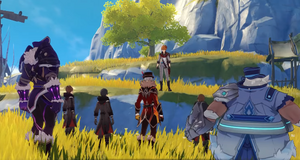 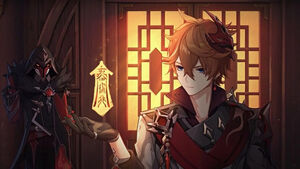 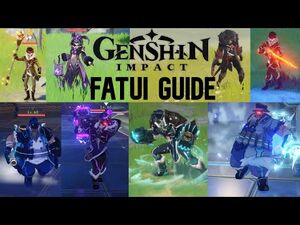 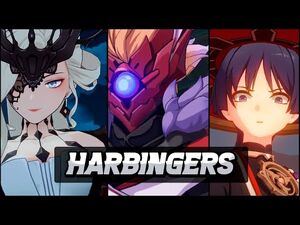