Villains Wiki
Register
Don't have an account?
Sign In
Advertisement
in: Kamen Rider Villains, Doctors and Scientists, Enigmatic,
and 31 more

Work for whoever employs them.
Take control of Japan.

Doctors and Scientists
Faust is a mysterious organization that creates the Smash monsters and the overall main antagonist faction of Kamen Rider Build.

The organization began as an unsanctioned Touto government military research program conducted by Gentoku Himuro, head of Touto's Institute of Advanced Matter Physics, for the purpose of conducting experiments to weaponize the Rider System so it could be mass produced for Touto's military. The organization also receives backing from the arms manufacturer known as Namba Heavy Industries Ltd.

Following their apparent dissolution, Faust abandons their original purpose of making Touto the dominant region of Japan and instead allies with whoever is willing to fund their research, including Touto's rival nations.

Faust was first founded by Gentoku Himuro, Soichi Isurugi, Kaisei Mogami and Takumi Katsuragi with funding from Namba Heavy Industries Ltd. after Takumi Katsuragi's human experimentation with Nebula Gas was shut down and Gentoku was forced to fire him from the Touto Institute of Advanced Matter Physics. Gentoku secretly approached Katsuragi afterwards and set up a secret research lab in a Namba Heavy Industries storage facility for Katsuragi to continue his research, Assembling a group of like-minded researchers at TIAMP who believed in the advancement of science at all costs and securing the backing of Namba Heavy Industries, Gentoku formed Faust with the intention of using Nebula Gas to engineer advanced weapons for the Touto military so Touto would be able to defend itself in the event of a war between the three regions of Japan. To accomplish this, Faust stole the panels that comprised the Pandora Box's outer layer to utilize them to make Fullbottles and covered up any evidence of their existence to prevent the other regions from getting suspicious.

Soichi's daughter Misora was also initially a member of the organization, having been deceived into believing they had good intentions so she could be used to purify Fullbottles for them. However, after Misora found out the truth she lost her will to continue purifying Fullbottles since they were being used for a destructive cause. Katsuragi also turned against the organization around this time and began plotting to kill Blood Stalk after discovering he was really the alien life-form Evolt.

To solve two problems at once, Stalk wiped Katsuragi's memories and swapped his face with that of Taro Satou so he could be molded into a "hero" to give Misora a motivation to purify Fullbottles again. Stalk then staged Taro Satou's body (with Takumi Katsuragi's face) and framed Ryuga Banjou for Katsuragi's murder. After Banjou was arrested, Stalk blackmailed prison security guard Masahiro Nabeshima into handing Banjou over to Faust so he could be experimented on.

When Namba Industries threatened to leak the Rider System to the other governments unless Touto adopted it, Faust conspired to steal the Pandora's Box from the Touto Institute of Advanced Matter Physics in order to raise hostilities between the three regions to the brink of war so the Touto government would be pressured into adopting it for military use. As the Prime Ministers of Hokuto and Seito arrived to inspect the Box and the research being done on it, Faust commenced their plan and Blood Stalk led a team of Faust Guardians to grab the Pandora's Box by force. To prevent Kamen Rider Build from interfering, Stalk had TIAMP researcher Shingo Kuwata transform into the Flying Smash to lure him away. Despite resistance from Build as well as Ryuga Banjou, Night Rogue and Blood Stalk were successful in their endeavor and tensions between the three regions rose considerably. Afterwards, Stalk poisoned Touto Prime Minister Taizan Himuro so Gentoku would rise to power and be able to lay the groundwork for war.

After Gentoku was made acting Prime Minister of Touto while his father was ill, he chose to disband the organization and staged a confrontation between it and the Touto military. At the confrontation, he had his aide Nariaki Utsumi pose as the leader of Faust, Night Rogue, and had him finished off to prevent him from talking. Despite, the organization was rebuilt by Blood Stalk in Hokuto. They allied with the Hokuto government and began conducting research on the Hard Smash, Smash capable of retaining their human consciousness while transformed. In addition to this, Faust also provided the data on the Sclash Driver to Hokuto so they could develop their own Kamen Riders to assist them in their invasion of Touto. The candidate for Hokuto's Kamen Rider was selected to be Kazumi Sawatari, a farm owner whose farm had been devastated due to the Skywall. After having his Hazard Level raised by exposure to Nebula Gas, Kazumi gained the power to wield a Sclash Driver, using it to transform into Kamen Rider Grease. Faust conducted experiments on three voluntary test subjects, turning them into Hard Smash. These three would later come to be known as the Hokuto Three Crows.

Following the downfall of Hokuto, Faust joined the Seito government and began backing their military. During their time under Seito's employment, Faust developed an artificial type of Smash in collaboration with Namba Industries called Clone Smash, which did not require a human host. Following the downfall of Namba Heavy Industries brought about by Evolt, Faust became the driving force behind Seito's military. They also began working on engineering the final form of Smash, Lost Smash, which were created from infusing an empty Fullbottle with the essence of a Clone Smash. These experiments were spearheaded by Shinobu Katsuragi, father of Takumi Katsuragi, and were all aimed at creating the ten Lost Bottles so Evolt could use them to complete the Black Pandora Panel and gain the ability of warp travel.

After the World of Build was merged with the main Kamen Rider world and the Skywall Disaster as a result never happened, Faust's existence was undone as well due to the Skywalls having never arisen. 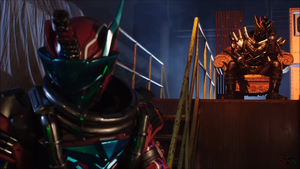 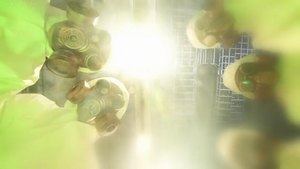