Knock off other competiton and rise on top in its bid to take over the Liberty City criminal underworld.(succeeded).

The Faustin Crime Syndicate was a Russian Crime Syndicate in Liberty City and the second most powerful Russian Syndicate in the city after the Petrovic Syndicate. They play a prominent role in the video game Grand Theft Auto IV, which results in all leading members of the Faustin Syndicate being killed by Niko Bellic. After the death of Mikhail Faustin, Dimitri took over the Faustin Mafiya remnant and adverted to Rascalov Mafiya.

The Faustin Crime Syndicate, is a large Syndicate of Russian Mafia members, who seem to run in both Dukes and Broker. The Syndicate is headed by Mikhail Faustin, an erratic and paranoid cocaine addict who lives in a mansion with his estranged wife and rebellious teenage daughter who was going out with one of the Lost gang. It would seem Faustin is a member of the Bratski Krug, or Circle of Brothers, a Russian version of the Italian-American Commission. Broker is run by one of the Syndicate's Brigadiers, Vladimir "Vlad" Glebov, a Russian loan-shark operating out of "Comrades" until he is executed by Niko Bellic.

Mikhail's orders for numerous hits on people for trivial matters draws unwanted attention from the law and upsets his partner, Dimitri Rascalov, who is angry that Mikhail has stopped following the unspoken rules of organized crime. Another Russian Crime Syndicate , the Petrovic Crime Syndicate , almost wage a full-scale war on the Faustin Crime Syndicate when Lenny Petrovic, Underboss son of Pakhan Kenny Petrovic, is murdered on orders from Mikhail. This is averted when Dimitri secretly strikes a deal with Pakhan Kenny Petrovic to use Niko to kill Mikhail. Dimitri then assumes control of the Faustin Crime Syndicate with his new partner, Ray Bulgrain, Niko's old boss in the human trafficking ring to whom Niko, supposedly, owes money to. The Faustin Syndicate under Dimitri's new leadership betrays Niko and attempts to kill him. They then set fire to Niko and Roman's apartment and taxi depot, running the cousins out of Broker and Dukes.

The Rascalov Crime Syndicate was one of the four Syndicate of the russian mafia in GTA IV. It was formed of what was left of the Faustin Family after the death of Mikhail Faustin.

Dimitri after Faustin's death asked Niko Bellic to meet him at the East Hook warehouse where he and his partner and enemy of Niko Ray Bulgarin tried to kill him but Niko with Little Jacob's help was able to survive the ambush but failed to kill Dimitri or Bulgarin and he later burned down Niko's cousin Roman Bellic apartment and cab depot. Later Lost MC member Ashley Butler owed Dimitri money and he used this advantage by forcing President Johnny Klebitz to kidnap Roman and bring him to the Bohan Warehouse where he tried to lure Niko into a death trap but Niko survived and rescued Roman.

Some time later Dimitri allied himself with the Ancelotti crime family and on their orders started blackmailing Deputy Mayor Bryce Dawkins about his gay affair with Bernie Crane in order to try and get him to put city contracts up for tender. But Niko who was friends with Bernie was able to kill the Blackmailers and protect Bernie from another killing attempt from Dimitri. Soon Dimitri heard about a diamond exchange at Charge Island between Niko and Luis Lopez (who was also an enemy of Bulgarin) and informed Bulgarin of the deal. Later Dimitri offered to buy some Heroin off the Pegorino crime family and their leader Jimmy Pegorino asked Niko to to the deal. But Niko soon learns that Dimitri is on a boat in East Hook from Roman.

In either choice the gang disolves and the Bulgarin Crime Syndicate steals the heroin.

Under Faustin's leadership, the Faustin Crime Syndicate appears relatively small and their operation mostly restricted to Broker. The leaders of the group get involved with fairly small to moderate criminal activities.

After Rascalov takes over, the organization gains power and influence incredibly quickly: by the end of the game, they have extensive drug running operations set up in Alderney and Charge Island. They also cause serious problems to the powerful Gambetti family, and blackmail Bryce Dawkins in attempt to gain more influence in the city. The fighting capabilities of the gang have also increased considerably - toward the end of the game, Niko has to fight against large and well-armed forces of Russians, much stronger than the bodyguards who failed to protect Mikhail Faustin (though it is possible that Dimitri might have diverted most of Faustin's forces before Niko attacks Faustin).

The family's rather surprisingly quick rise to power happens behind the scenes and is not explained in the game. It is unclear how Dimitri managed to expand acquire such incredible numbers of well-armed henchmen, or connections to set up numerous large deals and distribution rings. A possible explanation would be Dmitri's alliance with Ray Bulgarin who recently arrived in Liberty City (an "old friend" of Dimitri). It might even be possible that Dimitri was working for Ray behind the scenes, or the two have become equal partners in a newly formed unified crime syndicate. This is because the Rascalov Syndicate and Bulgarin Bratva are closely working together, and the latter inherits the heroin after Niko kills Dimitri.

It is unclear what happens to the organization after Dimitri's death. Its prospects seem extremely grim, however, as it has lost the man who took it to new heights and suffered heavy casualties and economic losses at Niko's hands; in addition, the authorities of the city may be focusing their efforts against them. 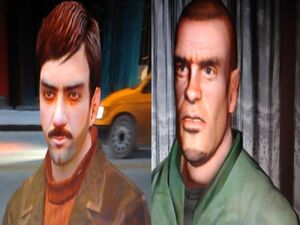 The two members of Faustin Family 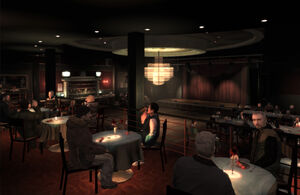 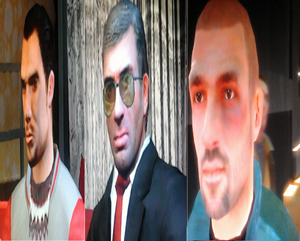 The Rascalov Family
Add a photo to this gallery

Retrieved from "https://villains.fandom.com/wiki/Faustin-Rascalov_Family?oldid=4037315"
Community content is available under CC-BY-SA unless otherwise noted.