Insulting his enemies in various ways.
Trying to kill Bowser and the Mario Bros.

Fawful is the toady of Cackletta, and is an eccentric Beanish genius who is a major antagonist in the Mario & Luigi series. He is notable for speaking in grammatically incorrect English and making obscure food metaphors (e.g. "And this battle shall be the delicious mustard on that bread!...The mustard of your doom!"). Fawful is a mechanical genius, but his common sense suffers due to his extreme rage which often causes him to act in a delusional manner. He is the secondary antagonist of Mario & Luigi: Superstar Saga, a minor character in Mario & Luigi: Partners in Time and the main antagonist of Mario & Luigi: Bowser's Inside Story.

Though his past is largely unknown, Fawful is inferred to have been a long-time follower of Cackletta prior to the events of Mario & Luigi: Superstar Saga and names himself as a pupil of hers in-game. He is officially confirmed to have gained his status as the greatest of Cackletta's students through his evil genius.

Fawful accompanied Cackletta to the Mushroom Kingdom, where he aided her in stealing the Princess's voice. While the two were on their way to the Beanbean Kingdom they encountered the Mario Bros. and Bowser who had formed a temporary alliance to stop the two villains. Taking care of Bowser, Fawful attacked the Mario Brothers. The Bros. destroyed Fawful's Headgear and then beat him. Unfortunately, Fawful summoned another Headgear and used it to knock Bowser's Koopa Cruiser out of the sky. Fawful appeared again attacking Beanbean guards in the mountains. When Mario and Luigi encountered him, he summoned a large stone to block their path.

Fawful attacked Woohoo Hooniversity with Cackletta; it was there that they planned to awaken the Beanstar with Princess Peach's voice. The plan didn't work out so well; it seemed the Princess was aware of the villains' plan and had gone into hiding, and the Princess whose voice had been stolen was Birdo. Birdo's squawking voice irritated the Beanstar so much it smashed through the floor and then the Mario Bros. showed up. The Bros. took out Fawful and then fought Cackletta who they defeated and crippled. Fawful sucked his mistress's energy into his Headgear and planned to attack the Mario Bros., only to be stopped and flung through the roof by Prince Peasley. Landing in Stardust Fields, Fawful found an unconscious Bowser whose body Cackletta possessed. Cackletta then began to call herself Bowletta.

Fawful appeared again guarding Joke's End where he stole the Beanstar from Luigi after seeing through a fake one. Like Bowletta, Fawful was fooled by Luigi pretending to be the Princess and as a result, the plumber was able to steal back the Beanstar.

Fawful showed up again as the penultimate boss in Bowser's Castle. Fawful, here suited in a skin-tight pink suit with a wing-like cloth under its arms, now had a large mecha that looked like his head and could shoot lasers. Also, Fawful could attack the Bros. with an electric antenna in his head. Sometimes, he would come out of his mecha and use electric bolts at the Bros., or he could fly away and then charge at one of them. Mario and Luigi could only attack Fawful when the mech overheated and he was forced to come out. After beating him in battle, Fawful tried one last ditch effort to beat the Mario Bros. but only ended up being knocked out of the castle by Luigi. He seemingly exploded as he fell, and an apparition resembling Fawful reappears as one of Cackletta's attacks in the final battle, which would imply that he is dead; however, future events seem to prove that this is not actually Fawful.

Fawful returns in the sequel to Superstar Saga, confirming his survival but does not play an antagonistic role this time. He owns a badge shop named Fawful's Bean n' Badge beneath Peach's Castle where the baby Mario Bros. (who are the only ones that can enter his shop) can trade Beans for badges. Despite his attempt to make a more honest living, He foreshadows his eventual return to villainy in Bowser's Inside Story before giving the heroes a hint as to their next objective.

Fawful again makes his latest appearance in this game as the main antagonist. Fawful now has his own henchman Midbus to act as his brawn. He tricks Bowser into eating a vacuum mushroom and takes control over him. Bowser sucks up the Mario Bros., Peach, Toadsworth, and a number of Toads into his stomach gloats, then falls unconscious. Fawful then takes over both Bowser's and Princess Peach's castles. Then Fawful uses special masks to take control of Bowser's army and invades the Mushroom Kingdom. Bowser chases after Fawful to defeat him for the rest of the game.

Eventually, Fawful steals the Dark Star, an evil star Peach tells about that was sealed under Toad Town, and absorbs half its power to become Dark Fawful. He becomes much more powerful, this seen with his much more darker appearance. He also gains a new headgear that allows him to hover and suck up the Dark Star's power, this too has some power as seen when Bowser sucks it up and the Mario Bros. have to defeat it. His power is also shown when he turns Peach's Castle into a giant robot to fight Bowser, which triggers a giant fight after it steps on Bowser, however, Bowser defeats it. Bowser then fights Dark Fawful and defeats him, destroying most of him, but still lives as Dark Fawful Bug. He is then inhaled by the Dark Star, completing its dark power and turning it into Dark Bowser. Bowser chases Dark Bowser to the top of Peach's Castle and the final battle begins. During the Battle after Dark Bowser loses 1000 HP, Dark Fawful Bug heals him and powers him up making him huge. Punching his stomach makes him spit out Dark Fawful Bug and lose his power-up. Bowser now can inhale him for the Mario Bros. to fight. Once he falls into him he turns into a giant more Buggish black creature with wiggling limbs and the Dark Star Core on his head. By taking out Fawful's glasses and his three-leg appendages, the Bros. can directly damage the Dark Star Core.

When the core was destroyed, Dark Bowser was left defenseless, and was destroyed by Bowser, leaving only the Dark Star, which rose into the air and exploded, restoring the light to the Mushroom Kingdom. As for Fawful, he survived the battle, though was reduced to a head and fading without the Dark Star to sustain him. He feigning remorse, he gives one psychotic smile in his final attempt to destroy the Mario Bros., self-destructing in a massive explosion that, instead of destroying them, forced them and all the Toads out of Bowser. Thus, Fawful's final plan fails and all his influence on the kingdom erased.

Fawful reappears in this 3DS remake serving the same role as in the original game. However, he is also the main antagonist of the game's side-story Minion Quest: The Search for Bowser. In Minion Quest, Fawful brainwashes many of Bowser's minions under his command by spraying them with a gas that only minions with unwavering loyalty (or high “Minion Spirit”) are immune to. Fawful originally planned to enslave Bowser, who he found unconscious on Hoohoo Mountain, but after Bowser awakened and escaped his grasp, Fawful decided to brainwash the Koopalings instead with an extremely potent version of his mind-controlling gas. Fawful then ordered them to conquer different parts of the Beanbean Kingdom so he and Cackletta can take control of it entirely. However, Captain Goomba and his Goomba Squad managed to defeat each Koopaling in battle, freeing them from mind control and relinquishing each region they’ve conquered. Fawful fought the Goomba Squad at Bowser’s Castle where he was seemingly defeated. Although this was a ruse to trick the squad into working for Bowletta (who was disguised as Bowser). When Fawful was confronted by them a second time, he sent them down into the lower parts of the castle, where he battles them with his robotic forces and was eventually defeated for real, thus ending his plans.

Fawful serves as the main antagonist in the 3DS remake of Bowser's Inside Story. In the game's side-story Bowser Jr.'s Journey, Fawful is the bigger bad, as he is the one who assigned the Best Fitness Friends to steal Bowser's Castle from Bowser Jr. and the Koopa Troop while Bowser is away. He only appears twice in the mode, at the beginning where he instructs the Best Fitness Friends to infiltrate Bowser's Castle while he captures Bowser at Peach's Castle. Later in Dimble Wood, Fawful obtains a Vacuum Shroom from Dieter and uses it to make Bowser suck up Peach and the Mario Bros.

Fawful appears in Super Smash Bros. Ultimate as a Neutral-type Primary Spirit, who grants a boost to electrical attacks when equipped. His battle is a Stamina Battle against Iggy Koopa equipped with a Rocket-Belt and R.O.B. on the Prism Tower stage. 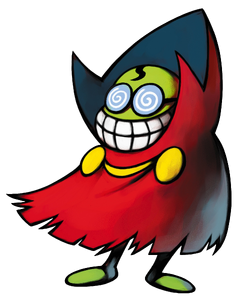 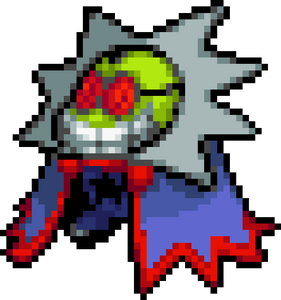 Dark Fawful in Bowser's Inside Story.

Dark Fawful with a vacuum helmet. 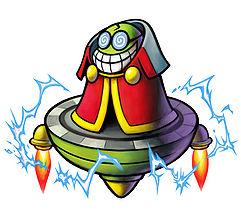 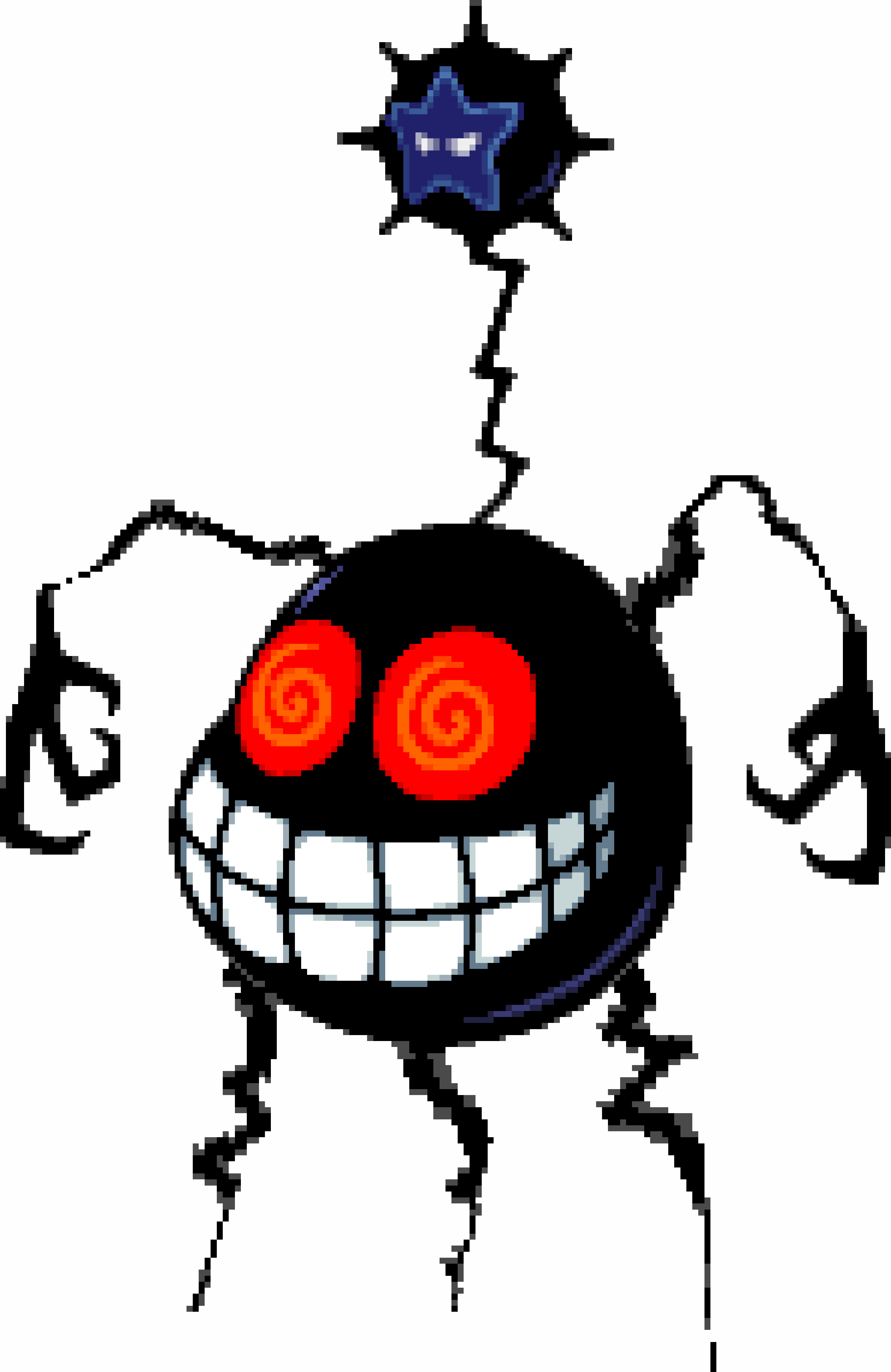 Fawful and the Dark Star Core. 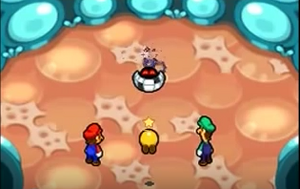 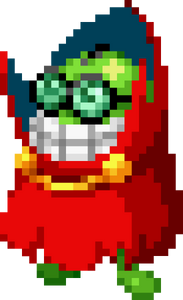 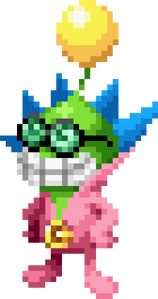 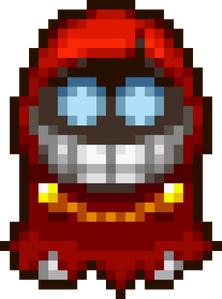 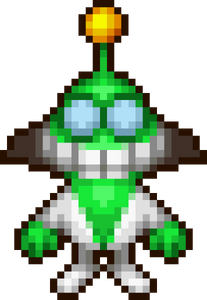 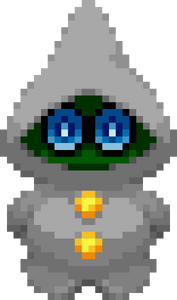 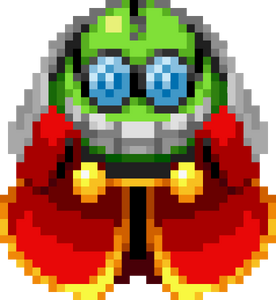 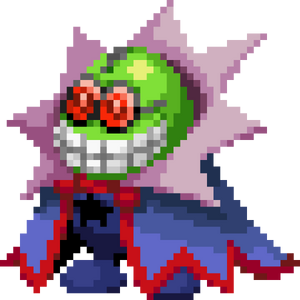 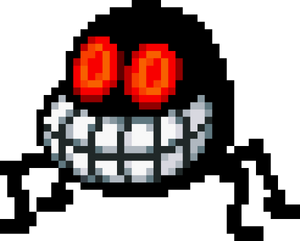 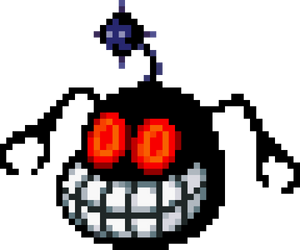 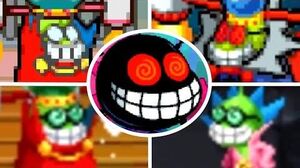 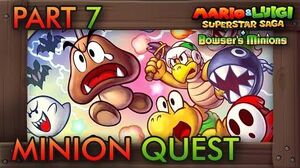 Retrieved from "https://villains.fandom.com/wiki/Fawful?oldid=3188762"
Community content is available under CC-BY-SA unless otherwise noted.