Fawn is the secondary antagonist of the 2011 computer-animated film Gnomeo & Juliet, and a minor character in its 2018 sequel Sherlock Gnomes. He is a deer statue, an ally of the Red Gnomes and Tybalt's best friend.

He was voiced by Ozzy Osbourne.

Fawn is the right-hand and best friend of the arrogant Red Gnome Tybalt, first seen giving him the Heimlich maneuver after he accidentally swallows a snail. During the lawnmower race between Romeo and Tybalt, Fawn complains that the rule forbidding cheating was unfair. After Tybalt cheats to win the race, Fawn tells Tybalt that he was "the greatest by far."

Later that night, as Romeo sneaks into the Red Gnomes' territory to get payback, Fawn plays a card game with small red gnomes, complaining about their theming of the Spider-Man films. When the spotlights went off because of Benny's paint can, Fawn and the other gnomes chase after Gnomeo. After Gnomeo escapes, Fawn reports it to Tybalt. They then ask Juliet if she had seen Gnomeo, to which she replies that she had not.

The next morning, as he helps wash off the blue paint on Tybalt's wishing well, Fawn asks the small red gnome why anyone would do this to Tybalt, to which the red gnome replies that nobody likes him. Fawn then asks what Tybalt will do in response to this. Tybalt answers that he will find the Blue Gnomes' weak spot and cause damage. They are implied to have destroyed the blue garden's most prized plant. Later fanning Tybalt when an alert of the blue gnomes was triggered. Seeing Benny in the alley, Tybalt tells Fawn that they will have a "smashing time".

Fawn witnesses Tybalt slice off Benny's hat and fights Gnomeo, ending up crashing into a wall and shattering. Mourning Tybalt's death with the other red gnomes, he and the others chase Gnomeo to the road, deeming him responsible. After Romeo is seemingly killed, Fawn is seen in a war between the red and blue gnomes.

Fawn plays a minor role in Sherlock Gnomes, where he and the other lawn decorates are brought to London. He is seen discussing with Sherlock about the possible whereabouts of the missing gnomes. 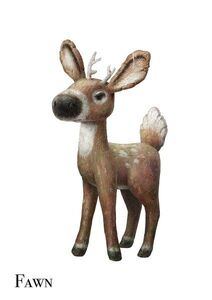 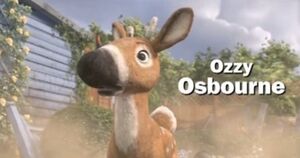 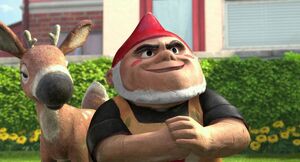 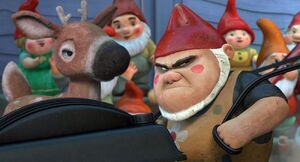 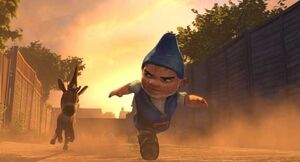 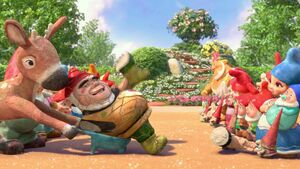 Fawn with a repaired Tybalt.