Comedy Supervillains
The Fearsome Five is a group of supervillains joined together to spread chaos and get money, but especially to fight a common enemy: Darkwing Duck, and mainly serving as the overall main antagonists of the Disney cartoon series Darkwing Duck. The organization reappears in the DuckTales reboot, with Negaduck replaced by Taurus Bulba. In the Bonkers crossover episode "Let's Get Toongerous", they served as five of the six main antagonists.

Just Us Justice Ducks-Part I

NegaDuck makes his first appearance in this two part episode. He is first seen after the rest of the Fearsome Five return from fulfilling their missions. He later shows up at SHUSH, disguised as Darkwing Duck and destroys the headquarters, leaving St. Canard defenseless. Later at the bridge, the Coastal Guard is there with Morgana, Stankfoot, Neptunia, and GizmoDuck. Darkwing tries to tell them that he has it under control, but then the Fearsome Five appear, who create a force field around the city, separating the Coastal Guard from them. This made the heroes form the Justice Ducks. Darkwing Duck, however, refused to join them and decided to look for the Fearsome Five himself. He managed to find them at a building. But before he could stop them, the Fearsome Five prepared a trap for him, making him fall out of the building, thus ending the first part of the episode.

After Darkwing Duck survived the fall, he sees the Fearsome Five, already in control of the city. From seeing this, Darkwing Duck decided to give up. The Justice Ducks decided to take on the villains, but were defeated and captured by them. They were then taken to the villain's headquarters, where NegaDuck sets them up in many deadly machines. He was about to turn them on, until he discovers that the other villains are fighting over the city. Annoyed by this, NegaDuck grabs out a chainsaw and uses it to cut a model of St. Canard into four equal section for each villain to rule, while NegaDuck keeps all of the money to himself. He returns to the heroes but is disturbed again by Darkwing Duck, who calls him down for scones. As NegaDuck came down, Darkwing Duck throws at anvil at his face, knocking him out unconscious. Upset about NegaDuck keeping the money to himself, the Fearsome Five plans on betraying him. As Darkwing approaches to them as NegaDuck, the Fearsome Five attacks him. The real NegaDuck appears and is upset that his minions were trying to kill him, as he sees them chasing Darkwing Duck. The Fearsome Five tries to tell NegaDuck that their plan was to kill Darkwing Duck all along, but NegaDuck doesn't believe in them, and instead, tells them to capture Darkwing Duck. They take Darkwing to the imprisoned heroes, where NegaDuck is about to kill Darkwing with a chainsaw. Luckily, Morgana used her magic to turn the chainsaw into a yak, giving Darkwing the chance to free the Justice Ducks. The Justice Ducks engage into battle with the Fearsome Five. In the end, almost all of the Fearsome Five were defeated, except for NegaDuck, who gets away. As the heroes go after him, however, he is seen holding a button that controls the force field around the city. He threatens to push it, which will make the walls move in on the city, destroying it. He is about to push it anyway until the Justice Ducks screams, making him fall off the building. Darkwing Duck drives a garbage truck below NegaDuck, but misses him on purpose. He and the rest of the Fearsome Five were then arrested.

Life, the Negaverse, and Everything

The Fearsome Five follow NegaDuck to his secret hideout, which is a portal disguised as a cake that leads to another dimension. Just then, Darkwing Duck appears. This made Fearsome Five throw Darkwing into portal, upsetting NegaDuck as he reveals to them his true secret hideout. As Darkwing Duck arrives at the Negaverse, he discovers that it's run down version of St. Canard, ruled by NegaDuck. There, he meets an alternate Gosalyn, who takes him to a nicer version of Tank. Tank explains to Darkwing that he's in the Negaverse, a world that's opposite of his. NegaDuck sends a warrant on his head, which makes an evil version of Launch Pad and the Muddlefoots attack him. He was almost killed by them until he was rescued by the Fearsome Five's counterparts, the Friendly Four. They beg him to help them defeat NegaDuck, but Darkwing refuses as he wants to go back to his world. But as soon as he sees the alternate Gosalyn aiding them, he decides to train the heroes. Suddenly, NegaDuck and the Muddlefoots appears and captures them. NegaDuck leaves Darkwing behind to create more mayhem, as he leaves a giant hammer above to crush him. Luckily, Quackerjack was able to free him by using his toy clown to cut him loose. Once freed, the heroes team together and fixes the town. Outraged by this, NegaDuck and the Muddlefoots head to the bakery to ruin Darkwing Duck's world. However, Darkwing Duck and the Friendly Four appear before them and stop the Muddlefoots. NegaDuck, on the hand escapes into the portal. Darkwing Duck bids farewell to Gosalyn as he goes after NegaDuck in the portal. As he catches to NegaDuck, NegaDuck grabs out a rope and attacks him with it. Darkwing Duck manages to grab the rope away from him, but then it gets tangled in the ring of the universal plug. NegaDuck warns him not to pull it, but Darkwing pulls it anyway. NegaDuck gets sucked into it, while Darkwing Duck makes it back to his world.

This episode takes place in the past, where the Fearsome Five are a pirate crew who are led by NegaDuck as their captain. They see a ship that is owned by a royal family and robs it of its jewels. Just then, Darkwing Duck's ancestor, Darkwing Doubloon, appears before the villains, alongside his crew. While they were fighting, Gosalyn's ancestor, who was part of Darkwing's crew, secretly gives her shipmates the treasure. As they escape with the last of it, however, Gosalyn accidently gets locked in a crate and is later found by NegaDuck, who uses her as bait to lure Darkwing Doubloon. After releasing that Gosalyn is missing, Darkwing Doubloon turns back, in order to save her by giving the treasure back to NegaDuck. But then, NegaDuck and his crew sinks his ship and leaves them stranded in the ocean. Luckily, Gosalyn reveals to him a map that leads to an island where NegaDuck hides his treasure. There, they find NegaDuck and his pirates, making their ways towards a cave to hide their loot in. Darkwing and his crew captures the pirates, leaving NegaDuck the only one standing. As NegaDuck enters his secret cave, he is confronted by Darkwing Doubloon, who battles him for the last time. In the end, Darkwing defeats him and takes his ship, where he keeps NegaDuck and his crew as his prisoners. 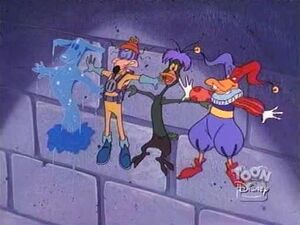 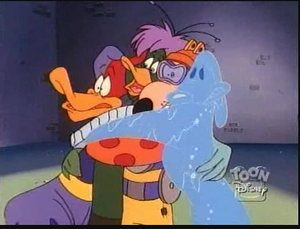 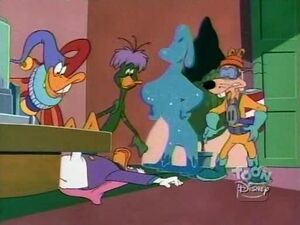 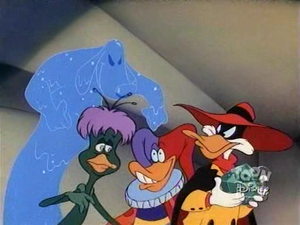 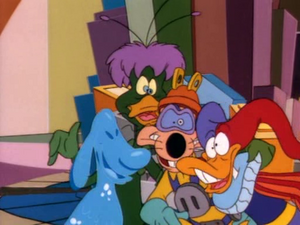 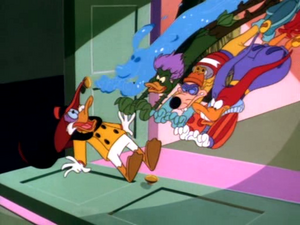 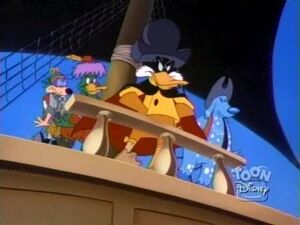 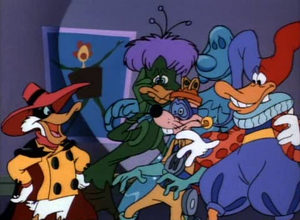 Retrieved from "https://villains.fandom.com/wiki/Fearsome_Five?oldid=4059008"
Community content is available under CC-BY-SA unless otherwise noted.