Devouring everything in sight.

Seeking out the Miraculouses.

Devour the Guardians' Temple (succeeded, but later failed as the temple returned back to its original place after its defeat).

The Dormant Sentimonster, later known as Feast while Akumatized, is a minor yet pivotal antagonist in the French superhero cartoon series Miraculous: Tales of Ladybug and Cat Noir. It is a Sentimonster inadvertently created by Master Wang Fu using the Peacock Miraculous that is obsessed with devouring all the Miraculouses in existence, and is later revived by Mayura and Akumatized by Hawk Moth in order to defeat Ladybug and Cat Noir.

According to Master Fu, while he was training to be a Guardian of the Miraculous, one of the many trials he had to endure was watching a Miracle Box without food and water for twenty-four hours. Eventually, after starting to become hungry and starting to further resent his training, Fu took the Peacock Miraculous and used it's power to place an Amok into his staff and thus create a Sentimonster out of his emotions that could get him something to eat. However, imbued with both Fu's hunger and resentment, the Sentimonster gained an insatiable hunger for the Miraculouses, causing it to devour the different Miracle Boxes and everything else around it. During the panic caused by this, Fu lost his staff and thus his ability to control the Sentimonster, and was given the Miraculous spellbook by one of his teachers to run away with along with the last Miracle Box. The Guardian's Temple was soon destroyed after this, and the Sentimonster then began to chase after Fu to eat him and his Miracle Box, only to fall into a chasm of lava instead. As a result, the Sentimonster would become imprisoned in the cooled magma while Fu would lose the spellbook and Butterfly and Peacock Miraculouses during the chase, going on to become the last Guardian on Earth afterwards.

In "Feast", years after being trapped, the Sentimonster, believed to be a statue made from cooled magma, is recovered and taken to the Louvre museum in Paris, where an unveiling ceremony for it takes place. Once the statue is revealed, Nathalie Sancoeur immediately falls ill upon seeing it, while Alya Césaire deems it more evidence towards her theory about the existence of the Order of Guardians because of the symbol it bears. After the unveiling, Marinette Dupain-Cheng heads to Fu's massage shop and tries to apologize for ever giving Alya a Miraculous, although Fu doesn't mind, believing that she would have deduced the Guardian's existence anyway, only to become terrified upon seeing the statue in her video. Fu proceeds to tell Marinette that the statue is actually a Sentimonster and explains it's origins before declaring that, now that Hawk Moth will know about it and be able to use it against them, he must take back her and Cat Noir's Miraculouses and leave Paris before they get hurt, although Marinette seemingly convinces him out of this.

Later, after Fu and Wayzz steal back the Miraculouses from Marinette and Adrien and flee, Feast arrives and begins to chase after the former, prompting a disguised Marinette and Adrien to pursue. Upon seeing that Feast is chasing after somebody, Hawk Moth determines that said person has to be the Guardian of the Miraculouses, with Mayura remarking that soon he won't have anything left to guard. As Feast continues to chase after Fu, Marinette and Adrien enlist the help of a bus driver, Roger Raincomprix and André Glacier in order to slow it down, although they are unable to stop it; while, at the same time, Wayzz unsuccessfully tries to convince Fu that he needs to stay and help fight the monster. Feast prepares to devour Marinette and Adrien, only for Fu, having had a change of heart, to arrive and distract it while handing the latter their Miraculouses back, revealing his identity to Hawk Moth in the process. Upon transforming, Ladybug and Cat Noir save Fu from being eaten and confront Feast themselves, with Hawk Moth confident that they don't stand a chance against it. However, unable to fight Feast directly, Ladybug goes to Fu upon receiving a metal detector using her Lucky Charm and asks him if his staff was made of metal, and, upon learning that it was, deduces where it could be before deliberately allowing herself and Cat Noir to be eaten.

Hawk Moth is ecstatic upon Feast's success, telling it to keep the Miraculouses warm for him and also allowing it to go after Fu. Inside Feast, Ladybug and Cat Noir find that everything it has eaten is trapped inside bubbles within an endless void, and begin to use Ladybug's metal detector. Feast approaches Fu and prepares to devour him and the remaining Miraculouses; however, before it can do so, Ladybug finds Fu's staff and Cat Noir destroys it with his Cataclysm, thus releasing the Amok and Akuma and destroying Feast entirely, before Ladybug returns everything to normal using her Lucky Charm. As a result of this, everything that Feast had previously eaten returns to where it belongs, including the Guardian's Temple. Fu subsequently tells Marinette of his plans to visit the Temple one day after Hawk Moth is defeated while also deeming her a fully fledged Ladybug and his eventual successor, while at the same time Gabriel plots to put the knowledge he has gained about Fu to use. 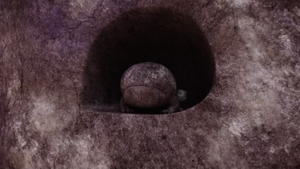 The Dormant Sentimonster in disguise as a stone statue.
Add a photo to this gallery

Retrieved from "https://villains.fandom.com/wiki/Feast?oldid=4297145"
Community content is available under CC-BY-SA unless otherwise noted.