Wallace and Gromit: The Wrong Trousers

Rob a museum and steal a precious diamond in order to become rich.

Feathers McGraw is a major antagonist in the Wallace & Gromit franchise. He serves as the main antagonist of the short film The Wrong Trousers, and the videogame Wallace and Gromit in Project Zoo, and makes cameos as an Easter Egg in the other films.

He is a silent, yet villainous penguin who is revealed to be a notorious criminal mastermind and bird of many faces, long thought to be a chicken, but McGraw was actually exposed as a penguin when his plan to rob a museum of a precious blue diamond was foiled by Wallace and Gromit.

He disguises himself as a chicken by wearing a red rubber glove on his head. This is apparently enough to fool Wallace, and possibly Gromit, as well as the local law enforcement, as evidenced by a wanted poster mistaking him for his chicken disguise.

Feathers McGraw was a lodger, renting a room with Wallace when he had financial issues. Not satisfied with the room on offer, McGraw moved into Gromit's room, forcing him to live in a doghouse. McGraw then proceeds to irritate Gromit further by playing music loud late at night, hogging the bathroom, and monopolizing Wallace's time. Thinking Wallace has forgotten him, Gromit sadly leaves the house.

Seeing Gromit gone, McGraw removed the controls on the techno-trousers to control them, and arranged for Wallace to slide into them when he slid down to breakfast the next morning. McGraw then takes Wallace on a remote-controlled 'walk' to test his new control of the trousers. While searching for a place to live, Gromit saw Wallace trapped in the techno-trousers, and followed. Gromit observed McGraw with the controls controlling Wallace, and also saw a wanted poster resembling McGraw. Following McGraw to the museum, Gromit witnessed him take measurements for the break-in.

Gromit returned to the house to his old room and found blueprints to the museum's blue diamond exhibit. Feathers, disguising himself with a red rubber glove, outfitted the now sleeping Wallace a helmet with a claw and walked him to the museum, sending him through the air vent, inside to the diamond room, walking on the ceiling. There, using the electric claw to snatch the diamond, he tried to walk Wallace back out. However, a loose roof tile causes Wallace to sway off balance and trip one of the lasers, setting off the alarms.

McGraw walked Wallace home and forced him into the wardrobe; Gromit attempted to intervene, threatening McGraw with a rolling pin, but the penguin drew a revolver and forced Gromit into the wardrobe with Wallace. Gromit hotwired the trousers to stamp continuously until the wardrobe's floor paneling broke off, allowing them to break free. The two tried to catch Feathers as he tried to evade them with their electric train set.

After a long battle with the penguin, Wallace and Gromit managed to trap him in a milk bottle. They then returned the diamond and turned McGraw over to the police, who imprisoned him in the zoo.

Wallace and Gromit in Project Zoo

Feathers returns in the videogame Wallace and Gromit in Project Zoo, once again serving as the main antagonist, in which the imprisoned penguin escapes his penguin enclosure and attempts to take over the zoo in order to create a diamond mine. Feathers captures baby animals in order to force their parents to do his bidding. Most importantly, Feathers has Wallace and Gromit's adopted polar bear from the zoo, Archie, held hostage throughout the game. He uses remote controls to control many of his inventions - including his boiler, helicopter, toy penguins, and the mining machine. In the final level, Feathers uses an invention called the exoskeleton which fires missiles and wields buzz-saws.

In the game's conclusion, Feathers is defeated by Gromit, yet he still tries to make one last escape; however, when he exits from his hideout to leave the zoo, the other zoo animals catch him and takes him back to his cell.

Feathers McGraw may appear as a harmless, if slightly unnerving, individual, yet his sharpened mind more than compensates for his small size and lack of physical strength. He is contentious, suave, manipulative and pragmatic. He is able to assess others quickly to get into their heads and can manipulate them to enable daunting circumstances to come out in his favor. He tends to keep his wits about him and maintain his concentration when performing elaborate tasks, even during intense episodes of anxiety and rage. He never allows his emotions to hinder his steady deliberation or to cloud his judgement. He clearly possesses some sociopathic traits as he has no problems taking hostages or attempting to pistol down anyone he perceives as a thorn in his side. His technological prowess is fairly impressive, as he retrofitted the techno-trousers with a remote control, and his intelligence is almost parallel to Gromit's. As a nearly flawless tactician, it takes an experienced genius to outwit and subdue him. 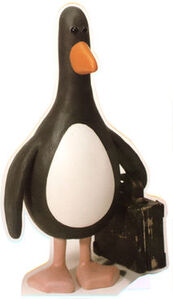 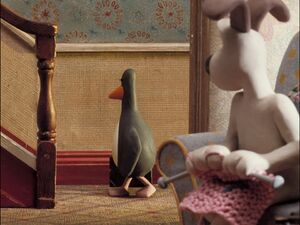 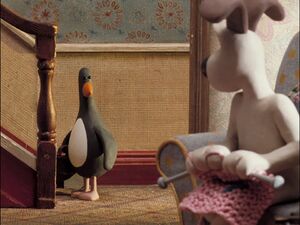 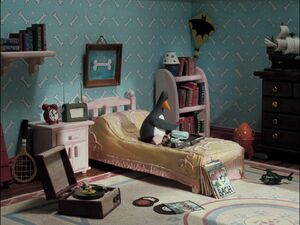 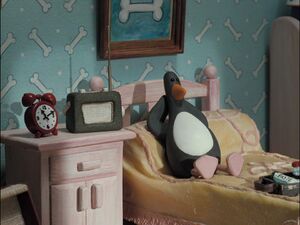 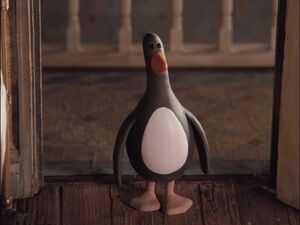 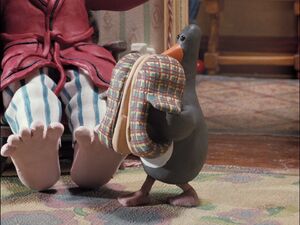 Feathers brings Wallace's slippers to him. 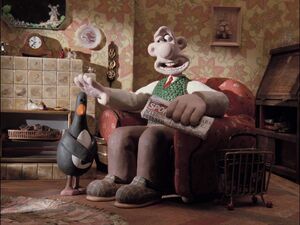 Wallace pats Feathers on the head, appreciating his help. 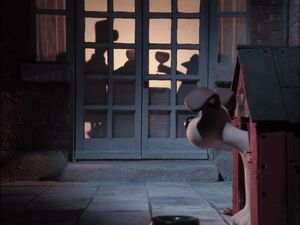 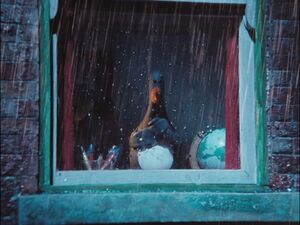 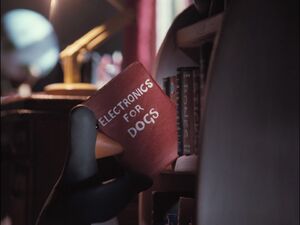 Feathers preparing to go to work on his plan. 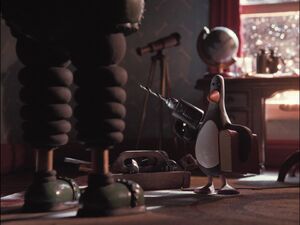 Feathers readying to switch the controls of the Techno-Trousers. 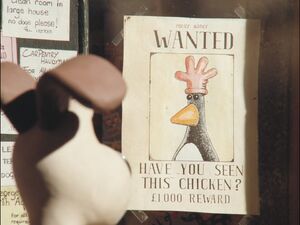 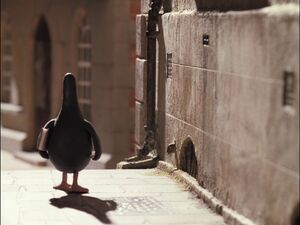 Feathers approaching the museum with a booklet in his hand. 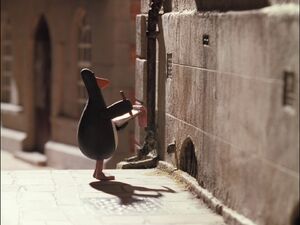 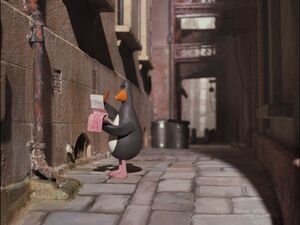 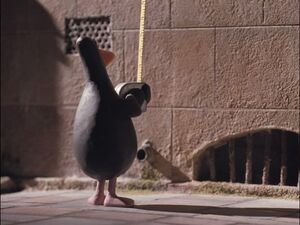 Feathers measuring the wall of the museum. 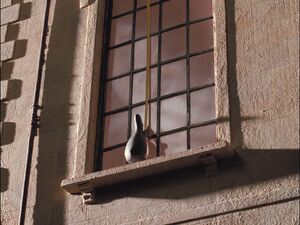 Feathers measuring the window of the museum. 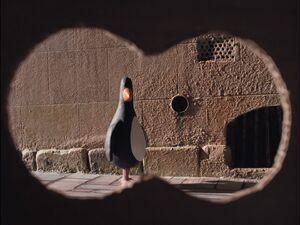 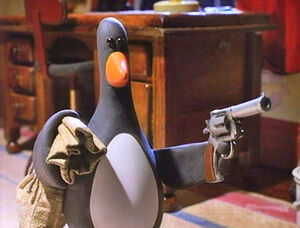 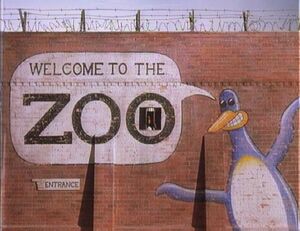 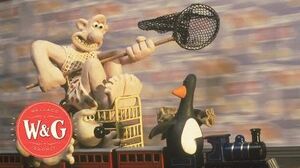 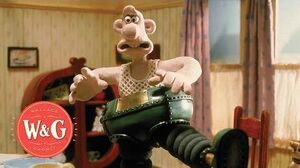 The Wrong Trousers - The Robbery - Wallace and Gromit