Bakery Owner (Until His Arrest)

Elderly Gangster
Feech La Manna is a minor recurring antagonist in season five of The Sopranos.

He was portrayed by the late Robert Loggia, who has also portrayed Frank Lopez in the 1983 version of Scarface. He has also voiced acted for Bill Sykes in Oliver and Company and one of the soldiers in the Horned King's Army in The Black Cauldron.

Not much is known about Feech's early life, but what is known is that he came to the United States from Sicily sometime in the 1950's where he started working for the DiMeo crime family. Feech was into bookmaking and illegal card games, taking orders from the then boss Ercole "Eckley" DiMeo. Feech also ran his own bakery and catering businesses and by the 1970s, he became one of the most respected men in New Jersey.

Despite this however, one of his card games was robbed by a young Tony Soprano and Jackie Aprile Sr. Feech was infuriated at not only being robbed, but also being disrespected, however Jackie's older brother Richie Aprile managed to get them off with a pass for managing to get away with it. Also helping Tony and Jackie was their fathers being very powerful capos under Eckley DiMeo. By 1984, Feech was arrested for a multitude of crimes, such as fraud, gambling, and racketeering, and was consequently sentenced to prison for the next twenty years.

After finally being released in 2004, Feech decided to get back into his crime family connections as a sports better, to which Tony and Junior Soprano agreed to let him back in as long as he didn't interfere with anyone else's work.

Later on, Feech and Tony's cousin Tony Blundetto confront a neighborhood gardener named Sal Vitro who had been working in the area for over 20 years. Feech however claims that his nephew Gary La Manna and should get a cut of the money Sal makes. Sal however brushes the old man off believing he's no threat, but Feech knocks him to the ground and starts beating him over the disrespect, ending with him breaking Sal's arm over the curb. Tony B hurriedly pulls Feech away, reminding him they're on parole and could get sent back to prison if they're caught by the police.

Paulie Gualtieri hears of the assault on Sal and later visits Feech at his old bakery and confronts him about with good intentions at first, kindly asking him to leave the neighborhood alone, but after an argument, Feech just angrily tells him to leave his store. In retaliation, Paulie later visits Gary and orders him to give his working area's back to Sal Vitro, but is dismissed much like Feech and Paulie assaults Gary and his friend Jimmy.

Tony is forced to have a sit down with Feech and Paulie, where Tony says that they're going to split the neighborhood in half. Sal is disappointed at first, but Paulie tells him he can also do Tony and Johnny Sack's lawns. Feech later complains to Junior about the ruling who tells Tony about this.

When some of Feech's men steal cars from the wedding of Tony's close friend Dr. Ira Fried, Tony remembers a moment at a card game earlier where after Feech told a good joke at a card game with only a couple of people there laughing, Tony told an intentionally bad joke and the room exploded with laughter, except for Feech. Tony worries that Feech could possibly want to take him out much like Richie Aprile was planning to and he decides Feech has to be taken care of, but doesn't want him to be killed since he still respects the man.

Under Tony's orders, Christopher Moltisanti and Benny Fazio trick Feech into storing several stolen flat-screen TVs in his garage. Later, a substitute parole officer arrives at his house unannounced and notices one of the televisions in Feech's living room. After looking in Feech's garage and finding the rest of them, Feech is arrested and sent back to prison for essentially the rest of his life. 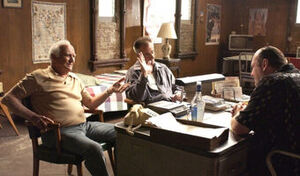 Feech at a sit down with Paulie. 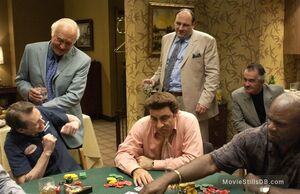 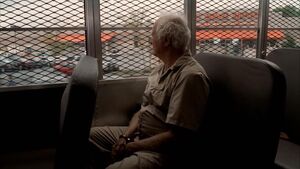 Feech looks out at the freedom he's now lost forever.
Add a photo to this gallery

Retrieved from "https://villains.fandom.com/wiki/Feech_La_Manna?oldid=4337743"
Community content is available under CC-BY-SA unless otherwise noted.