Villains Wiki
Register
Don't have an account?
Sign In
Advertisement
in: Arrogant, Kidnapper, Once Upon a Time Villains,
and 35 more

Felix (Once Upon a Time)

Member of the Lost Boys

He was portrayed by Parker Croft.

Felix is one of the Lost Boys who inhabited Neverland. It is unknown how he came to Neverland, but he became Pan's most trusted and loyal of the Lost Boys. He first appears when the pirate, Captain Hook sails to Neverland and recently rescues Baelfire after the Shadow loses him in the ocean while taking him to Neverland. He searches Hook's ship looking for the boy that has the heart of the truest believer. At first, Hook lies about his whereabouts but eventually hands him over to Felix when tensions between him and Baelfire grew worse. Felix then discovers that Baelfire is not the boy they were looking for but they keep him, telling him that it's his lucky day.

Many years later, Felix and the rest of the Lost Boys appear when Greg and Tamara arrive in Neverland with Henry as their hostage. Shocked that the people they were working for were teenagers, Felix tells them that destroying magic was never their intention and demand that they hand over Henry. Greg and Tamara refuse and demand to know what the plans for Henry are, he has the Shadow kill Greg and the Lost Boys shoot and wound Tamara with an arrow. As the other Lost Boys disperse to chase down Henry, Felix spies on a lone Mr. Gold until being called out of hiding. He warns Mr. Gold will be making enemies with Pan if he desires to find Henry, and that path will lead to death. Unafraid, Mr. Gold boldly attests if that occurs, he'll be taking countless other lives with him as well; implicating Felix will be one of them, too. Before letting Mr. Gold walk off, Felix tosses him a doll figurine from Pan. The sight of it shocks the older man, who breaks down into tears as he holds the doll in his hands. Felix gets the last word in by remarking something that hasn't crossed Mr. Gold's mind in years can still make him cry, and leaves the man in his misery.

As Henry's family begin traversing through the island of Neverland, Pan gives Emma a map he claims will lead straight to him, if and only when, she stops denying her true self. However, not everyone is willing to play Pan's game, so Regina casts a locator spell on it, despite Hook's caution against taking the easy way out. The magically enchanted map brings them to Pan's current location, but straight into a trap. Displeased at the breaking of his rules, Pan has the Lost Boys engage in battle against them. During this time, Felix briefly duels with Hook. At the sudden pierce of a whistle, the Lost Boys all return to Pan's side. They leave after Pan advises Emma, once more, that the map won't work until she cracks the truth about herself.

Following Henry's capture, Pan throws him an apple as the other Lost Boys look on. Inviting Henry to try out target practice, Pan calls over Felix, who puts the apple on top of his own head. Pan eggs Henry on as the Lost Boys begin chanting for him to shoot. Tentatively, Henry readies his aim at the apple as Pan promises him the act will be “exhilarating”. At the last moment, he changes his target from Felix and fires the shaft at Pan, who catches the arrow with ease. Instead of being angry, Pan looks at Henry with satisfaction and pulls him away to show him something. Later, Felix expectantly witnesses Neal's return to the island, and promises that Pan will be very happy to see him.

Binding Neal's wrists, Felix forces him through a trek in the jungle. Felix expresses hopes that since their last encounter years ago, he might never have to see him again. Neal retorts he's here for Henry, though Felix has doubts as Pan is someone not be trifled with. Felix doesn't think Pan will just give up Henry, the heart of the truest believer, without a fight. Neal replies it might work if he asks nicely, which causes Felix to scoff at his stupidity. In the next instant, Felix is knocked out by him. He awakens shortly after and trails Neal to where some Lost Boys are stationed as sentries, but discovers them asleep. Reporting back to Pan, Felix implies the unconscious Lost Boys he found are the Dark One's work as they were put under a sleeping spell. From this, Pan gathers that father and son have reunited and joined forces. Felix advises moving Henry to another location since they will be coming to take him away, but Pan contends that things are just getting started. After Pan successfully drives the father-son pair apart, Felix arrives with the rest of the Lost Boys to steal Henry back as Neal is dragged away to a holding location.

Neal is drugged and placed in a cage by the Lost Boys as Felix commands them to follow Pan's orders. Later, Pan arrives to check up on their captive, who is quickly falling unconscious from the effects of the drugs. When Felix asks what should be done with him, Pan tells them to hang Neal up next to the other caged prisoner.

On higher ground, Felix stands by as Pan observes through a mini-telescope of Emma's group movements towards finding Neal. Pan jokes that they look so determined to find their missing friend. Inquiring about the next step, Felix is told to bring Neal to the Echo Cave for rescue.

During a quiet evening by the campfire, Pan senses someone leaving Neverland. Felix wants to know how they are going to stop it, though Pan already knows it's too late for that. Instead, Pan is going to send word to their friends on the ground in Storybrooke, John and Michael Darling, and let them handle the matter, even if it moves their plan up a notch. Additionally, he stresses they need to get Henry ready by letting him have a chat with the person in the other cage, Wendy. Later, Felix notices Henry rebuffing Pan's attempts to engage him in a conversation. As Henry walks off into the jungle, he remarks to Pan that they are losing the boy's trust. Felix proposes bringing the other cage to the camp, but Pan has another idea in mind. The two play along in a conversation in which Pan assigns him to deliver supplies to the other side of the island. Inevitably, Henry overhears this discussion and trails Felix; just as Pan wanted. At one point, the sound of snapped branch attracts Felix's attention, but when he turns around, there is no one in sight. Later, Felix purposely drops a bag of fruit to draw Henry's attention and lead him to Wendy. Under Pan's orders, Wendy tricks Henry into believing she is dying as a result of the fading magic in Neverland.

Following Pan's immortality restoration, Henry's family return to the Lost Boy camp. Regina is so driven to wring an answer out of Felix about Pan's whereabouts that she threatens to take out his heart, but Emma softens the Lost Boys up by giving them hope that, like her, they can find and be a part of loving families. Felix interjects to assert Pan is their only family they need. He tries to dissuade the other Lost Boys from believing Emma as she discloses that Pan needed Henry's heart not to save the island, but to save himself. Eventually, her promise of bringing everyone home causes them to reveal Pan is at his "thinking tree" near Pixie Woods, much to Felix's displeasure. He is brought aboard the Jolly Roger for the journey back to Storybrooke as Henry's heart is stolen back from Pan and placed back into his chest. All this upsets Felix greatly and he refuses food when Henry himself brings him some. Surprisingly, he learns Pan is now inhabiting Henry's body, and with satisfaction, accepts the plate of food.

After a safe journey from Neverland to Storybroke, Felix descends to ground level at the dock and secretly converses with Pan when no one is paying attention. To gain the trust of Henry's family, the boy asks that Felix be locked up since he is dangerous. Later, Felix is freed after Pan steals the spell scroll of the Dark Curse, which his leader intends to enact.

They go to the wishing well as Pan dumps in all the ingredients for the Dark Curse. Felix is pleased that, once again, Pan never fails. For the last necessity of the curse, Pan needs the heart of the thing he loves most. While Felix guesses that they must need Mr. Gold's heart, Pan explains love doesn't always have to be romantic or familial, and can entail loyalty and friendship. As such, Felix quickly realizes Pan is talking about him. He grows apprehensive and panics, but can do nothing to stop Pan from tearing out his heart. Felix dies as the heart is crushed to dust. 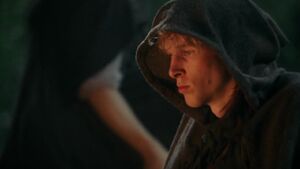 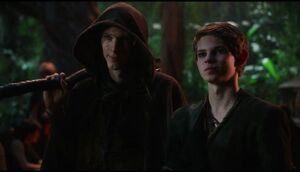 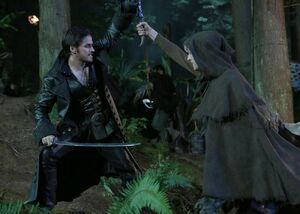 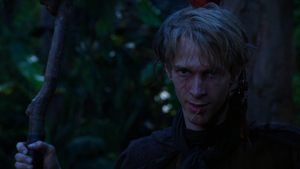 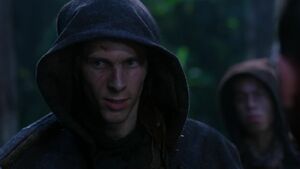 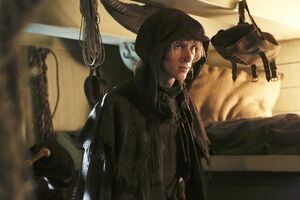 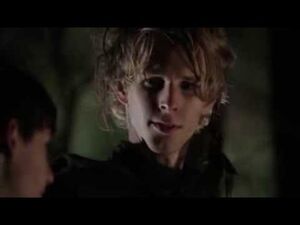 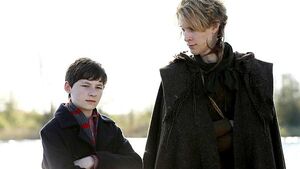 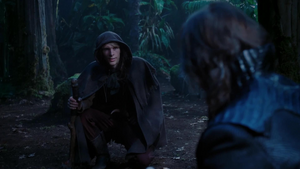