Founder and leader of the Watchdogs

Protect the world from threats (formerly).

Lead the Watchdogs into hunting down and killing Inhumans across the globe (currently).
Kill anyone who threatens to stop him (ongoing).

He is a former S.H.I.E.L.D. agent who later founded the Watchdogs to hunt down and kill every Inhuman in the world following the Terrigen outbreak.

He is portrayed by Titus Welliver, who also portrayed James Savoy in Transformers: Age of Extinction, and the Trask Imperial Captain in The Mandalorian.

After joining S.H.I.E.L.D., Felix Blake rose through the agency's ranks until he was granted Level 7 clearance, where he would often work alongside Phil Coulson on various missions. During this time, Blake became fixated on improving Howard Stark's Nitramene (which can implode all types of objects), thinking that it could be added to the agency's arsenal. In the wake of the infamous Battle of New York, Blake was saddened to learn that Coulson was killed by the Asgardian, Loki.

Blake was assigned by Nick Fury to retrieve a Chitauri weapon found and used for bank robbery by two civilians after the Battle of New York. Along with Jasper Sitwell, Blake tracked down the two robbers and sent Sitwell to intercept them and collect the alien weapon. Much to Blake's disappointment, when Sitwell returned to the base, he had not killed the two robbers; instead recruiting them as Agents of S.H.I.E.L.D.. One of them, Claire Wise, was then assigned to be Blake's new assistant while her boyfriend Benjamin Pollack would work in engineering with Agent Sitwell, but, among not having any particular capability, was not skilled enough to make coffee, much to Blake's annoyance as this was his first question to her.

Thanks to his clearance level, Blake learnt that Coulson survived his encounter with Loki. Coulson contacted Blake to hear from HQ's research results regarding a Chitauri helmut infected with an alien virus since one of his agents, Jemma Simmons, was infected. Blake, on behalf of their superiors, informed him to dispose of Simmons to save the other agents. Coulson, in response, pretended to have a bad connection and hung up on him, annoying Blake. After Coulson arrives at the Sandbox, Blake has agents take the helmut and then voiced his displeasure in Coulson disobeying orders and how it would lead to his team being disbanded. Much to his surprise, Coulson was calm about this and told him to get used to not being person he once was. Unknown to Coulson, this led Blake to rightly believe of a conspiracy within the organization and notified Victoria Hand of Coulson's team's disrespect for S.H.I.E.L.D. procedures, causing the two of them to doubt their loyalties.

Months later, Blake, Hand and Sitwell were summoned to the Bus by Coulson, John Garrett and Antoine Triplett in regards to the hunt for the mysterious mastermind behind the Centipede Project, "the Clairvoyant" (who was secretly Garrett), who Coulson started to suspect was an actual psychic, much to Blake's doubt; and they also consider that since Deathlok attacked Garrett and Triplett in a safehouse, they were getting close to his identity. Thanks to Skye's strategy plan, the agents were sent on two-person teams to locate the possible suspects. Blake was sent with May to an assisted living home to find one Thomas Nash, leaving May to find the doctor and Blake find his door number. However, while doing so, he is attacked by Deathlok. After secretly tagging him, Blake tried to reason with the super-soldier, only for the latter to slam him to the floor and break his spine. He was immediately hospitalized after this.

After Blake got out of the hospital, he was left disgusted when finding out that S.H.I.E.L.D. was revealed to have been filled with HYDRA operatives, and that he was working for a corrupt organization the entire time. His disgust was further fuelled when he learnt that Coulson has recruited Deathlok and other power people, driving him to believe that powered people are a threat to the world. When hearing of the online hate group known as the Watchdogs following the Inhuman outbreak, Blake took over the group and radicalized them by arming them with weapons, soldiers and the Nitramene that he was able to successfully improve.

He ordered the Watchdogs to reveal themselves to the world by attacking an A.T.C.U. facility with Nitramene on LIVE television. Wanting to draw out an Inhuman for his men to kill, Blake arranged a meeting to draw them out so they could follow them to their home and kill them. In another location, Coulson and Lincoln Campbell apparently found Blake monitoring the organization's current activities. He argued with Coulson regarding S.H.I.E.L.D.'s current agenda and why he turned his back on the agency. He also pointed out that they never accomplished a lot of good things and that the Avengers were no different due to Ultron being created. After Coulson argued that he was only doing this out of hate, Blake pointed out Coulson most likely killed someone simply out of hate, indirectly referring to Coulson recently killing Grant Ward because he hated him. Coulson, knowing that he wasn't actually there, ordered Lincoln to kill them with his powers, revealing that he was actually a hologram. Blake is later seen exchanging with Giyera by giving him a warhead he stole from the A.T.C.U. facility he attacked and getting weapons so he can continue arming his men to hunt down Inhumans.

Blake being attacked by Deathlok. 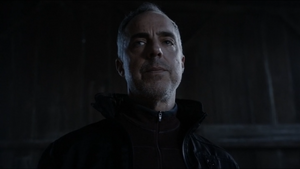 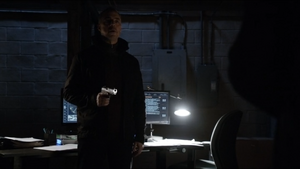 Blake confronted by Coulson and Lincoln. 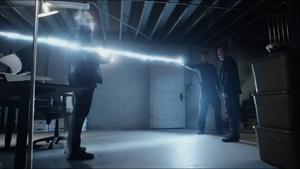 Lincoln attacking Blake, revealed to be a hologram. 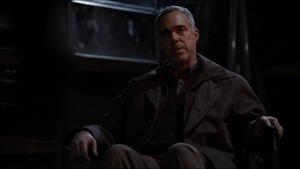 Blake reveals himself being in a wheelchair.