Serve whomever is riding on them.

Fellbeasts are giant, vicious flying creatures found in J.R.R. Tolkien's fantasy book, The Lord of the Rings, appearing in all three volumes. They also been featured in the numerous adaptations of Tolkien's work.

The Witch-King of Angmar and the other Nazgûl rode these creatures during the War of the Ring.

The fell beasts were described as large, winged creatures without feathers, similar enough to dragons that they could almost be mistaken for one. Its pinions were in between horned fingers; and its body gave off a foul stench. Fellbeasts resembled dragons but were large winged creatures that were bred by the Dark Lord Sauron for war purposes. Tolkien describes them as creatures that were holdovers from an older world before Sauron began breeding them for war.

For the movie adaptations, fell beasts are depicted as more akin to wyverns (dragon-like and serpentine creatures that have two legs and two wings); i.e. their heads appear more like a snake's and they don't have beaks like in the novel, leading to the common misconception that they are dragons in the books; Tolkien definitely meant a pterosaur-like creature.

After losing their horses, the regrouped Nazgul were given fellbeasts as the new steed, which give them more ground in their search for One Ring. One of the Ringwraiths then came close in locating the Fellowship of the Ring while they camping at the western shore of the river Anduin, at which they describe his steed as "a great winged creature, blacker than the pits in the night". However, both he and his ride were driven away by an arrow fired from Legolas with his great bow of Lórien, resulting the beast to let out "a harsh croaking scream" as they vanished into the gloom of the Eastern shore.

Frodo, Sam and Gollum encountered a fellbeast while passing through the Dead Marshes, wherein Gollum referred to the beasts as "wraiths on wings".

The Lord of the Rings Trilogy Films

In the films created by Peter Jackson and Weta Workshop, the fellbeasts retain their roots, which remain much the same as in the novels, being flying steeds given to the Nazgul by Sauron. However, they are additionally far more formidable in the films. During the Siege of Osgiliath in The Return of the King, the fellbeasts are shown being able to snatch up multiple Gondorian soldiers in their talons before dropping them to their deaths.

When the fellbeasts attack the fleeing soldiers, they inflict heavy casualties until Gandalf drives them away with a blinding flash of light. When Sauron orders his forces to attack Minas Tirith, the Nazgul take their fellbeasts and snatch men off the ramparts, also using them to destroy the city's trebuchets and prevent the Gondorians from mounting adequate defenses. When the Witch-King of Angmar attacks Theoden during the battle of the Pelennor Fields, he uses his fellbeast to maul the king's horse, Snowmane, who is sent toppling on top of Theoden. The Lord of the Nazgul then orders his mount to feed on the king, only for Eowyn to behead the monster, killing its master soon after.

The remaining fell beats take part in the Battle of the Morannon, where they are pitted against the Great Eagles. They quickly flee back to Mount Doom when Sauron senses Frodo put on the One ring, but for all their speed, the fell beasts deliver the Nazgul too late; when the ring is destroyed, their masters are unmade and the fellbeasts are destroyed in the volcano's eruption.

Lord of the Rings: War in the North

In the video game, several fell beasts appear, with one serving Agandaur and another serving his second-in-command, Wolfrun. Both of these fell beasts are killed by the Great Eagle, Beleram. 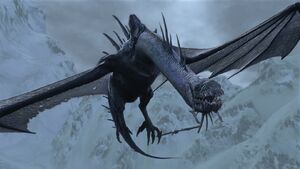 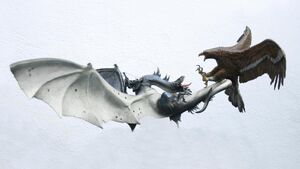