The nameless female assassin (also known as "?"), is a minor antagonist in Hitman: Blood Money, appearing in the mission "You Better Watch Out". She is an operative of the Franchise, hired to assassinate Agent 47 at a Christmas themed party in the Rocky Mountains of Colorado.

Little is known about the mysterious female assassin. Sometime prior to Agent 47's arrival in Colorado, she infiltrated the party and subdued one of the female sex workers, taking her costume as a disguise. She then took up position in a secluded corridor, awaiting the arrival of her target, With the intent to lure him into a trap inside a nearby private room.

Her presence in the mission is first referred to by Alexander Leland Cayne. He comments, "We had our best agent on the spot. We were ready...".

The mysterious female assassin is shown to be a cold, calculating and efficient contract killer. She is able to see through any disguise that Agent 47 may be wearing, and attempts to use subterfuge to isolate him. Should she succeed in luring Agent 47 into her private room, she will attack 47 after a brief bit of dialogue.

She refers to Agent 47 as a "hunk of meat" as she does this and says that she considers killing him to be a "waste". These personal expressions shown display an empathetic detachment and playful indifference concerning the way she regards her victims and also on how she generally operates while on a mission, all of which is befitting of a predatorial lurer who primarily uses her physical appearance and assets to attract her targets into a false sense of security, right before she goes for the kill.

Unlike her fellow assassin Eve, she shows a desire to avoid unnecessary casualties, and the unconscious body of the sex worker she impersonates can be seen hidden behind the sofa in her private room. 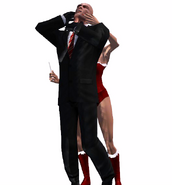 The female assassin killing Agent 47.
Add a photo to this gallery

Retrieved from "https://villains.fandom.com/wiki/Female_Assassin?oldid=4258064"
Community content is available under CC-BY-SA unless otherwise noted.