Each members possess their own unique and lethal superhuman powers and attributes.

Serve Darkseid to the best of their ability.

The Female Furies are an all female military unit lead by Granny Goodness which serves as both an elite strike force and honor guard for Darkseid, Lord of Apokolips. Raised in Granny Goodness' orphanage, the Furies were taught military tactics under Goodness and assassination under Kanto. Goodness instilled fanatical loyalty in the Furies, teaching them to be loyal to her first, but for their foremost loyalty to be for Darkseid, making them willing to "Die for Darkseid".

In spite of their loyalty to Darkseid, infighting and bickering among the Furies is commonplace, most typically to grab a leadership of the group.

Most of Fury members are New Gods, but Granny Goodness is flexible enough to accept females of other races. A woman named Alianna Hubbard (albeit brainwashed) is the only human ever trained as a Female Fury; she was ordered to kill Mister Miracle by Granny Goodness. She appeared in Mister Miracle #25, part one of a story that was never completed. According to Mister Miracle, Alianna's strength was equal to that of Big Barda who is now his wife, and her reflexes and speed were superhuman.

During their first appearance, Lashina, Stompa, Bernadeth, and Mad Harriet attempted to arrest and bring Big Barda back to Apokolips, after she had escaped along with Mister Miracle (later both married). Instead, Barda was eventually able to convince her former teammates to help her, and the four Furies stayed on Earth for quite some time. They eventually returned to Apokolips under unknown circumstances, and were punished by Granny Goodness for their betrayal and failure.

Darkseid has used the Female Furies on several occasions, such as when they broke into a prison to rescue Glorious Godfrey, and they have battled several DC superheroes including Superman, Wonder Woman, Superboy, and the Suicide Squad (wouldn't exactly call them heroes but still), etc. A second wave of Female Furies, including long-time member Gilotina, Malice Vundabar, Bloody Mary, and Speed Queen later appeared, causing trouble for Hawk and Dove. The Furies made an appearance as villains in Seven Soldiers event, specifically in the Seven Soldiers: Mister Miracle mini-series. Here, they are all given human forms along with Darkseid and his other minions, with the Furies all becoming prostitutes with Granny Goodness acting as their pimp. They attempt to entice Shilo Norman, the second Mr. Miracle when he arrives at the Dark Side Club searching for Darkseid himself. They knock Shilo out, and then stuff him in the trunk of a car while he is bound and gagged, eventually torturing and setting him ablaze in a forest. This is later revealed to be a horrid illusion brought about by Darkseid's Omega Sanction.

They are later shown assisting Granny in her scheme to overthrow the Greek Gods, kidnapping Dr. Helena Sandsmark in order to antagonize her daughter Wonder Girl during the events of her own stand-alone mini-series. After the deaths of Mister Miracle and Metron during the Death of the New Gods, the Source stated Darkseid was the only remaining New God. The Furies who were not visibly killed during this event, currently, are Granny Goodness, Lashina, Stompa, Gilotina, Malice, Wunda, and Artemiz; although at the end of Death of the New Gods it is reiterated that all the New Gods are dead. While the New Gods were being killed off, Granny Goodness orchestrated the Amazon-American war to pose as Queen Hippolyta to train women (such as Harley Quinn and Holly Robinson) under the auspices of becoming Amazon warriors into new Female Furies. This seems to conflict directly with Terror Titans, where Lashina (in her human form), is shown to be one of the villains running the Dark Side Club with the Clock King. She is last seen being electrocuted unconscious by Static, who then presumably turns her over to the authorities with the rest of the upper level Dark Side Club players.

After the end of the Fourth World, in the Final Crisis of mankind, the corrupted Mary Marvel released the Anti-Life Equation and creates new Female Furies from Earth's heroines and villainesses, including Wonder Woman, Catwoman, Giganta and Batwoman.

During the Darkseid War as part of The New 52 story, Lashina and Kanto went to Earth in search of the amazon Myrina Black, who had given birth to Darkseid's child named Grail. After Darkseid's demise Lashina, Kanto, and Kalibak encountered Wonder Woman, Mr. Miracle, and several other superheroes. The New Gods were close to defeating the heroes until Big Barda appeared and repelled villainesses. Barda proposed a peace treaty with Lashina but Lashina refused, declaring that the Furies would never stop hunting her down.

Later, Barda returned to Apokolips and made a pact with the Furies: Barda would return to the group if they helped her defeat Grail and protect Mr. Miracle. While Grail and the newly revived Darkseid, now enslaved by his own daughter, were about to defeat Wonder Woman, Mr. Miracle and the other heroes, Barda appeared through a boom tube alongside Lashina, Stompa, Bernadeth, Mad Harriet, Steppenwolf, Kalibak, and Kanto. Working together with the heroes, the Furies were able to defeat Grail and separate Darkseid from the Anti-Life Equation. In the ensuing explosion, Darkseid and Grail both vanish. Big Barda revealed the truth to Mr. Miracle and left with the other Furies back to Apokolips.

These are members brainwashed or forced into joining the group: 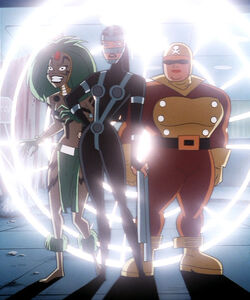 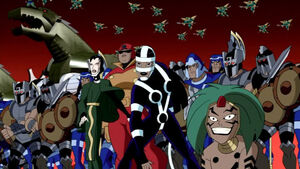 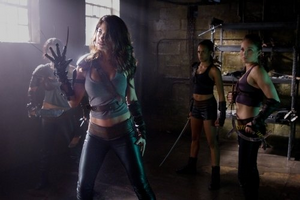 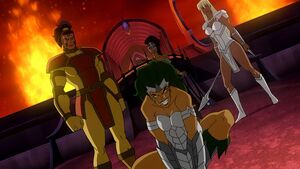 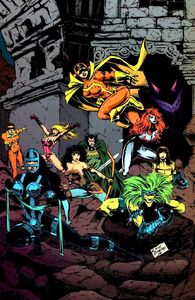 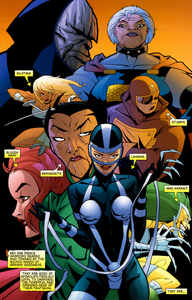 Retrieved from "https://villains.fandom.com/wiki/Female_Furies?oldid=3772308"
Community content is available under CC-BY-SA unless otherwise noted.