The Fembots are recurring antagonists in the Austin Powers movie series. They are henchmen of Dr. Evil.

A Fembot first appears disguised as Vanessa Kensington, a girl Austin Powers had believed had been his true girl, and who had helped him previous on his very first mission, and had been commissioned by Frau Farbissina to destroy Austin. But Vanessa had been revealed to be a Fembot, and she blew herself up hoping to kill Austin Powers.

But Austin survives and remarks that he couldn't believe Vanessa was a robot all along. But then he exclaimed he was single again.

A second Fembot appears disguised as Britney Spears which is all revealed to be an elaborate trap to kill Austin by Dr. Evil. Britney is revealed to be a Fembot when Austin makes her head flip sideways back and forth so much she breaks down and blows up. 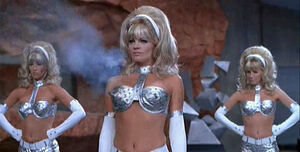 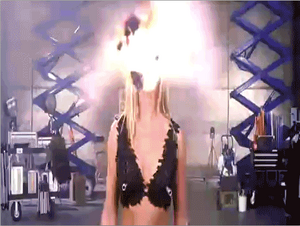