Robbing banks and other people (including her fellow women).

Deceiving people.
Ordering and hating men who she sees as dirt.

To rob all of the banks of Townsville.

Femme Fatale is a very conniving supervillainess and an antagonist in Cartoon Network's The Powerpuff Girls. She appeared in "Equal Fights", which was also her debut episode and was the main antagonist of that episode. She also had a cameo appearance in the special "Powerpuff Girls Rule!".

She is a bank robber and master thief who manipulates the Powerpuff Girls into hating males so she can continue to rob banks. She steals only Susan B. Anthony coins since all other current denominations have men on them.

She, at the end of the episode "Equal Fights" (also her premiere episode), is promptly beaten up and taken to jail after the Girls confronted her outside a coin collectors convention in Townsville and tell her the truth of whom the suffragist Susan B. Anthony really was -- a woman who illegally voted at a time that women were forbidden from voting, and demanded to face the same punishment that a man would face when she was nearly given a lenient sentence. Thus, the Girls decided to treat Femme Fatale the way they'd previously treated male villains. Unfortunately, after this, she is not ever mentioned or referenced again.

It is never stated why Femme hates men. One theory is that she was badly mistreated by her boyfriend/husband, and it caused her great emotional discomfort.

Femme Fatale, however, makes a cameo in "The Powerpuff Girls Rule!", which is the series finale.

Femme Fatale is a very malicious and cruel misandrist who manages to con the Powerpuff Girls to turn against all men. She used her speech to continue her crimes. While she does hate men, she seems to show sheer disrespect to other women despite her lie to the girls and her ultra-female's lib costume, as she stole Susan B. Anthony coins from a female bank president, broke the arm of a policewoman, and copied the hairstyle of a teenage blonde girl. She takes sadistic pleasure in attacking anyone who tries to stop her, both male and female. 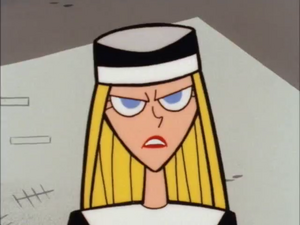 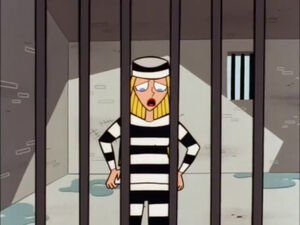 Femme Fatale in jail.
Add a photo to this gallery

Retrieved from "https://villains.fandom.com/wiki/Femme_Fatale?oldid=3179842"
Community content is available under CC-BY-SA unless otherwise noted.