To become the Next God Fist Master

Feng Wei (in Chinese: 馮威 Féng Wēi; Japanese: フェン・ウェイ Fen Wei) is an antagonist in the Tekken series of videogames. He was introduced in Tekken 5.

Feng Wei has a big lust for power and fighting. His love for fighting eventually got the best of him and his love for fighting became a strength and a weekness. Feng eventually murdered his long-time master after he scolded him for causing fight outside of his dojo. Feng's biggest goal and desire is to become the strongest fighter in the world, and is not afraid to show his strength and power to do so. Feng went as far as destroying other dojos when he was searching for the scroll of the "God Fist" and even incapacitated dojo owner Mr. Kazama.

Despite being prone to malicious acts, Feng is not completely diabolical, as he only wishes to become the strongest in the world. He has no concern of attacking people that do not stand in his way and has no concern to rule the world. He also seems to have a vague sense of honor, when he accepts defeat from Wang Jinrei in the arcade story mode.

As young boy Feng began training under Kempo master. He become the strongest fighter in dojo. Unfortunately, when his master scolded him for fighting outside the school, Feng killed him. He joined in King of Iron Fist Tournament 5 to find "Secrets of Gold Fist" scrolls.

Feng found "Secrets of Gold Fist" scrolls in previous tournament. It got him unusual power. Dumbfounded, Feng learned about King of Iron Fist Tournament 6 and entered to it.

After the 6th tournament. Feng returned to his former training ground to complete his intense training. However, an unexcpected fighter stepped upon him and gestured him to fight. Feng has no reason to refuse, and aceepted his opponent's challenge. 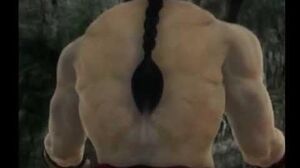 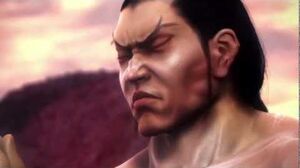 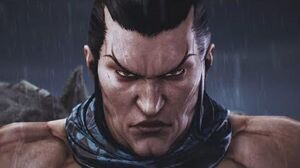 Retrieved from "https://villains.fandom.com/wiki/Feng_Wei?oldid=3909375"
Community content is available under CC-BY-SA unless otherwise noted.