The Most Savage Werewolf Alive Today

Harry Potter and the Half-Blood Prince

Mercenary of the Death Eaters/Snatchers

Become a ruler of the new world Voldemort creates (both failed).

He is a sadistic Werewolf who serves as a high-ranking member of the Death Eaters. His main goal was to lead and unite every Werewolf in a violent and feral lifestyle, in hope of creating a world of Werewolves by infecting as many people as possible with the curse of lycanthropy. He is also notorious for his unrelenting bloodlust and savagery, and is well known as a particularly violent and cannibalistic serial killer, with implied pedophilic tendencies. He is one of the most feared individuals in the British Wizarding community.

In the films, he was played by the late Dave Legeno.

Regarded as the most savage Werewolf of his time, Fenrir Greyback relished in animalistic cruelty and gained an unhealthy liking for his own wolfish traits, to the point where his human form gained a more savage and wolfish appearance. Fenrir's savagery was next to none, and he would very often position Werewolf attacks with malicious intent. While he was hell-bent on getting revenge against the wizarding-kind for the horrid prejudice against Werewolves, Greyback took this to a whole other level by purposefully infecting others with lycanthropy (especially children) so they would grow to hate the Wizarding World. Fenrir also gained some cannibalistic tendencies even when he wasn't in his Werewolf form, a feat of inhumanity that even managed to disgust Albus Dumbledore.

Greyback was a predator in both animalistic and sexual terms, as he spoke to Hermione Granger with a mix of sexual and cannibalistic undertones. This, combined with his fondness for biting and attacking children, indicated that Fenrir might have had pedophilic interests. According to Dumbledore, Greyback boasted of what he did to his followers, which shows that he has a sense of pride towards his atrocities. While he was never branded an official Death Eater, he had no qualm in serving as a weapon for Lord Voldemort and his Death Eaters in exchange for victims.

Despite being a ferocious killer who was feared by many, Fenrir Greyback also had a sense of fear when it came to those more powerful than him. This is shown when he cowed away from Severus Snape when the latter arrived to kill Dumbledore. In the video game Hogwarts Mystery, Greyback was ready to maul and kill the protagonist, but fled in fear after catching Dumbledore's scent.

Almost nothing is known about Greyback's past and how he came to be who he is. While he was most certainly bitten and infected with lycanthropy, how he turned into the barbaric and insane monster he would come to be known as remains completely unknown.

Fenrir Greyback was in the First Wizarding War and was a ruthless Werewolf who took no remorse in killing. He was either infected as a youth or during his childhood. Unlike other Werewolves, he showed a delight in transforming, going as far as to express lupine tendencies and aggression in his human form.

During the First Wizarding War, he was convicted of killing Muggle children, and brought before the Ministry for a trial. However, Greyback passed himself off as a homeless Muggle man who claimed to be astonished at being in front of a congregation of Wizards and horrified by the child killings. Given Greyback's stale smell and scruffy appearance, the court almost believed his homeless story, until Lyall Lupin, Remus Lupin's father, who was a court martial at the time, noticed the signs of Lycanthrophy in Greyback's face. He noted the pallor that set in during the full moon (coincidentally, it was going to be a full Moon the following night) and Lyall said how Werewolves were brutal monsters who should all be executed. Lyall was heard by Greyback, who was silently enraged, and by the other ministers, who said Lyall should stick to what he's good at and be rounding up Boggarts instead. Lyall was forced to leave the room, and Greyback was declared innocent and escorted out. The escorting Wizard intended to obliviate Fenrir's memories of the court event, but Fenrir managed to outdo them and escaped with the help of two accomplices.

Greyback plotted revenge against Lyall for his racist comment and, some time later, found the Lupin home and planned to attack his son in retaliation. As the full moon approached, Greyback positioned himself near an almost five-year-old Remus' bedroom. Greyback transformed and burst his way through the boy's bedroom window. While Lyall reached the Werewolf in time to drive him away with a number of powerful spells, the deed was done and Fenrir's revenge had been exacted; Remus was bitten and infected with lycanthropy, dooming him to live on as a Werewolf, much to the regret and sorrow of his father.

Some years after this event, Greyback had remarked about his exacted revenge on Lyall to fellow Werewolves amongst his pack. This chatter was picked up by spies of the Order of the Phoenix, who informed Albus Dumbledore, and allowed the headmaster to track down Remus and his family. Albus would then ensure that Remus could attend Hogwarts with no worry of his affliction or harming others.

During the Second Wizarding War

During Draco Malfoy's sixth year at Hogwarts, Greyback appeared at Hogwarts thanks to the Vanishing Cabinet in the Room of Requirement, whose other entrance was located at the shop Borgin & Burkes from the Diagon Alley. He was present with the other Death Eaters on the Astronomy Tower when Albus Dumbledore was murdered by Severus Snape and thrown off the tower. During the Battle of the Astronomy Tower, Greyback also also set Hagrid's hut on fire with Bellatrix Lestrange, allowing Snape to defeat Harry Potter and escape victorious.

One year later, Greyback helped the Snatchers, led by Scabior, to catch Harry, Ron and Hermione and brought them to the Malfoy Manor, home of Lucius Malfoy. He, along with Scabior, became furious when the Malfoys tried to hand the trio to Voldemort like they did all the work, but he decided to remain silent for his own good. He was later chased away out of the Manor by Bellatrix, but Bellatrix committed a great error when she did so, because without Greyback, the trio were able to escape with Dobby from the Death Eaters, although Dobby was fatally stabbed. Thus, Greyback was saved from being punished by his master when he arrived.

Following Harry Potter and his friends' infiltration in Hogwarts, Greyback came along the other Death Eaters and Werewolves to participate in what became the Battle of Hogwarts. When student Lavender Brown fell from a balcony, Greyback attacked her, fatally injuring her. Hermione Granger, however, arrived with Harry and Ron Weasley. Upon seeing what Greyback did, Granger blasted him and Greyback fell out from a window of the Viaduct Courtyard. It's completely unknown if Greyback survived the fall or not, but if he survived it, he was most likely arrested and sent to Azkaban following the end of the war. In the film version, he died after being blasted onto the cliffs by Hermione Granger with a blasting curse, as revenge for murdering Lavender Brown. 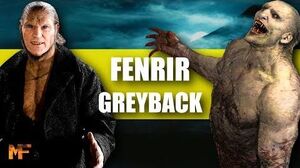