In Marvel comics, The Fenris Wolf attempted to steal the golden apples of Idunn away from her, but was driven off by Haakun the Hunter and banished to Varinheim.

he Fenris Wolf was unchained by Hela to assist in an attempt at bringing about Ragnarok, but the Ragnarok was thwarted by Thor and returned to his prison.

The Fenris Wolf was unchained again by Loki to join him, Ulik and Hyrm in an assault upon Asgard using weapons forged for them by Surtur. Ulik and Fenris attacked Thor in unison, and struck Mjolnir with such force that Sif's left arm was taken off in the blast. Hyrm then joined Ulik and the Fenris Wolf in battle, and together, the three of them shattered Mjolnir.

The Fenris Wolf went on to assault Kurse, who was protecting orphaned children. Fenris slew him by plunging its hammer into his skull.

The Fenris Wolf participated in an assault upon Vanaheim, and again faced Thor in battle. Thor bound Fenris in chains and used its body to knock down Durok in order to save Sif.

After Thor had slain Durok the Fenris Wolf snapped its chains to face him again, but was quickly struck down by Beta Ray Bill.

Beta Ray Bill unleashed a God Blast wave from his hammer Stormbreaker upon the Fenris Wolf and slew him, leaving nothing but his skeleton behind. At the sight of this, the army that fought for the Fenris Wolf fled from Vanaheim.

Fenris was brought back to life by Rune King Thor in order to swallow Asgard's sun and moon, assisting to bring about Ragnarok, and euthanize the realm of Asgard.

Super strength: Fenris is monstrously strong, strong enough to lift between 500-1000 tons with ease. It has proven to be a powerful threat even for the mighty Thor himself, and with time and patience it will grow to even larger proportions further increasing its already great strength and durability.

Lycanthrope form: Fenris can assume the form of either an immensely strong and virtually invulnerable large wolf, or that of a comparably strong wolf-like humanoid. In this form it possesses powerful teeth and claws and can use an axe made of enchanted uru metal. After being studied by AIM; Fenris also learned that it can assume the form of people it has devoured for a minimum of 24 hours at a time after consumption. making it a literal "wolf in sheep's clothing".

Size Alteration: As time passes by and with each battle it fights it can grow larger and stronger with each moment. Increasing the power of both its quadrupedal and anthropomorphic forms during an intense battle, if given enough time to grow. legend states it is destined to grow large enough to swallow Asgard's sun whole, as was proven when it had done just so during the Ragnarok storyline.

Super Stamina: Fenris has shown incredible bodily stamina throughout the years. shown being able to fight with the mighty Thor for days at a time and barely showing fatigue.

Super Senses: Being a legendary beast, Fenris possesses largely enhanced senses of a greater level than those of certain animals, both of natural and even mythical origins. Enabling it to see and hear distant objects more clearly than the norm for most Midgard creatures, and identify and track its pry purely by scent alone even.

Mythical Invulnerability: Unlike most Asgardians or Asgardian beasts. Fenris was and is forevermore invulnerable to most physical attacks, taking and receiving damage from only the strongest heroes of the Marvel Universes. beings or items of magical origin such as Thor or Odin have been among the few known to accomplish this feat. 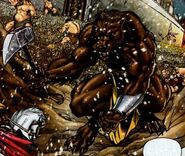 Fenris in his werewolf form

Fenris Wolf in Hulk Vs Thor