NOTE: This article is about the incarnation of Fenris Wolf from the Marvel Cinematic film series. The mainstream version can be found here: Fenris Wolf.

Fenris Wolf, or simply known as Fenris, is a supporting antagonist in the 2017 Marvel Cinematic Universe film Thor: Ragnarok. She is a ferocious Asgardian wolf who serves as the loyal pet of Hela.

Her vocal sound effects were provided by Fred Tatasciore.

In her early years, Fenris acted out as a loyal pet and enforcer to Hela during her tenure as executioner for her father Odin (the King of the Asgardian Gods). As the years go by, Hela developed her own ambitions to usurp her father and take over Asgard for herself, and Fenris played along to maintain her loyalty to her. However, anticipating that he would be betrayed, Odin manages to defeat Hela and has her confined in a dark realm called Hel while having his Asgardian soldiers to slay Fenris when she tries to stop them. Fenris' corpse would later be locked in Odin's Vault.

Eventually, Odin dies from old age after reuniting with his son Thor and Loki, but not before he tells them about Hela's existence. With Odin gone, Hela was able to escape and easily dispatches both Thor and Loki before taking over Asgard for herself. After appointing Skurge as her executioner, Hela uses her magic to bring life an army of dead soldiers (known as Berserkers) and resurrect Fenris after locating her body in the vault.

With her hostile takeover of Asgard complete, Hela intends to use the Bifrost Bridge to take over the Nine Realms, but she is angered to learn that Hemidall (the sentry of the Bifrost Bridge) has stolen the sword controlling the bridge before hiding away with the rest of the Asgardian citizens to form a resistance against Hela's reign. A furious Hela then orders Fenris and the Berserkers to take down the resistance so that she can use Hemidall's sword to activate the bridge and proceed with her plans.

Just as Hela and her forces have finally located the resistance and engaged into a fight against them, Thor and Loki have returned to the rescue after defeating the Grandmaster's forces and escaping Sakaar (with the help from the Hulk and several gladiators) on one of the Grandmaster's giant ships. Spotting the Hulk, Fenris engages into a fight against him. Though it would've appeared that the giant wolf has the upper hand (as her fangs were strong enough to pierce against the Hulk's durable skin), the Hulk fights back and manages to hurl Fenris out of Asgard into outer space. It is likely that Fenris has died succumbing to asphyxiation right before Hela and the Berserkers are killed following the destruction of Asgard (at the hands of the fiery demon Surtur).

A painting of Hela and her pet Fenris.

Fenris is resurrected by Hela. 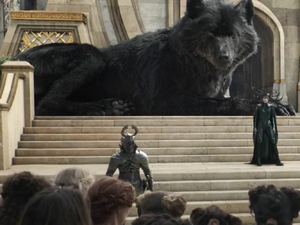 Fenris with Hela and Skurge. 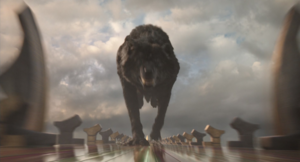 Fenris storming towards the Asgardians.

Fenris sniffing and checking to see if Bruce Banner is dead or alive. 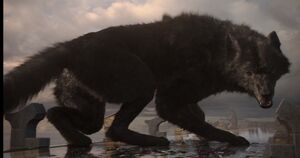 Fenris being confronted by Hulk. 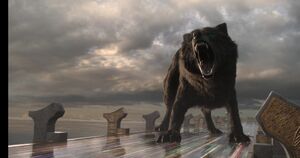 Fenris roaring at Hulk before engaging him in combat.

Fenris's death as she falls into outer space below after Hulk punches her off Asgard. 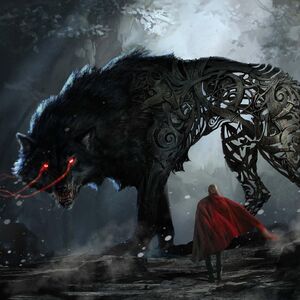 A concept art of Fenris.