Head Scientist of the Anti-Recess Legion

Professor Fenwick, simply known as Fenwick, is one of the secondary antagonists (alongside Kojak) of the 2001 Disney animated film Recess: School's Out!. He is Dr. Phillium Benedict's right-hand man and head scientist of the Anti-Recess Legion.

He was voiced by Peter MacNicol, who also originally played Dr. Janosz Poha in Ghostbusters II.

Not a lot is known about Fenwick, but he is very timid, cowardly, pusillanimous, apprehensive and easily intimidated. He is also prone to panic when his boss is upset. Quiet, peaceful, soft-spoken, imperturbable and middle-witted, he is averagely competent and consummate, so that he can come up with good ideas at times. However, he is a complaisant and docile wimp. He is also shown to be very heartbreaking and pitiful, but he can still be called a villainous character.

When Benedict and the Legion took over a military testing site to steal the weather altering laser that was in development in the area, Fenwick managed to shut down the alarms, before telling Benedict that the situation is now all clear, before learning that their next move is to covertly take over Third Street School when summer begins.

Later on, Fenwick was tasked with finding the principal's office. However, he does not see what is so significant about it that would necessitate Benedict to find it for him, before Benedict reveals that the reason why it is significant for him is because he used to work there before Peter Prickly replaced him. He is later told off along with Dr. Lazenby and Dr. Steinheimer in regards to the failures regarding the laser (referring to the earlier forced terminated test of the weather altering laser that was unintentionally revealed to T.J. and his gang). After it became apparent that T.J. and the others snuck into the school (Mikey was unable to hold in a belch developing inside him, and the vents they were observing in gave way), Fenwick was briefly questioned by Benedict as to who let kids in the school before Benedict screamed for his agents and ninjas to get them, resulting T.J.'s capture.

The next day, after Gretchen managed to black out the lab that used to be the auditorium, Fenwick and some scientists were tasked to fix the fuse (under the belief that it was the result of a blown fuse), although they ended up locked inside of the power room by Gretchen. However, Benedict supplies for a backup generator as he and his men attempt to proceed with the laser as planned, even with a fight between Benedict's forces and a joint group of students and teachers. At the end following the destruction of the tractor beam, Benedict and his men (including Fenwick) end up being arrested for their crimes. As Fenwick is being escorted to a police car, he cried out that he was just following Benedict's orders and offers to testify against Benedict for the trial in exchange for leniency. However, the arresting officer refuses Fenwick's pleas and furiously puts him in the car; even the local school snitch Randall Weems was appalled at the offer by calling Fenwick a "squealer".

Fenwick was sentenced to lifetime in prison along with Benedict and their men for their crimes. 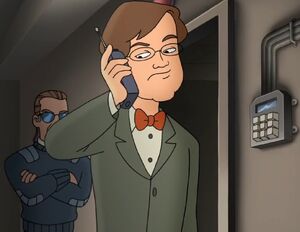