Ferdynand Kiepski, also known as Ferdek, is the main protagonist in the famous Polish comedy series Świat według Kiepskich. His laziness and rabble are almost legendary.

Ferdek was born in 1950. Twenty-five years later, he married Halina in 1975 and they have two children Waldek and Mariola. Before 1981, he was selling water in Świdnicka Street in Wrocław.

Now he is unemployed, but often assumes businesses to earn money, but usually he fails. He lives in Wrocław on Ćwiartki 3/4 Street with his wife Halina and daughter Mariola.

Before there lived with them Halina's mother Rozalia (who was in conflict with Ferdek), but she died in 2007 and their son Waldek, who went to USA in 2005. He returned in 2011, but now he lives with his wife Jolanta Pupcia-Kiepska, who is hated by his father.

Ferdek hates Marian and is very often seen arguing with him but they also can collaborate to earn a lot of money. They also like drinking vodka together at night.

His second neigbour is Arnold Boczek. In earlier episodes they were good friends, but now Ferdek is very mean to Arnold and insults him constantly.

The third neighbour was old man Borysek. Ferdek liked him, but considered him a pervert.

He was often visited by Edzio ,who was the postman. Ferdek doesn't liked him, calling him octopus and thinks that he wa very stupid when it wasn't true.

In later episodes, his best friends are the homeless alcoholic Kazimierz Badura and (sometimes) the CEO of housing association Andrzej Kozłowski. He had a very good relationship with his son, but it got worse when Waldek returned from the USA.

Ferdek often argues with his daughter Mariola, but he really loves her.

Ferdek is very lazy, but clever. In older episodes, he was very enthusiastic and cheerful, but later became peevish, truculent, quarrelsome, unfriendly, and bearish. He is also very ill-tempered, argumentative, opprobrious, and quite arrogant. In his opinion the most important value in honor. 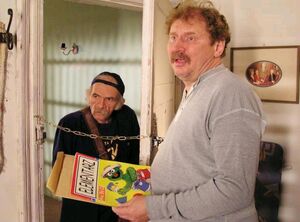 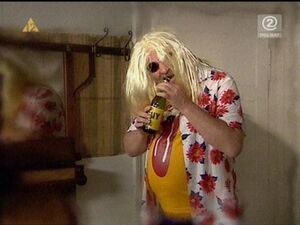 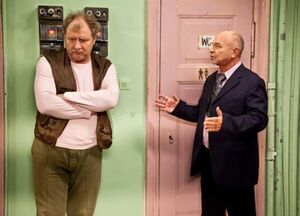 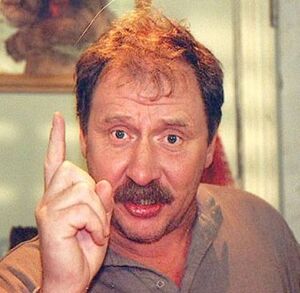 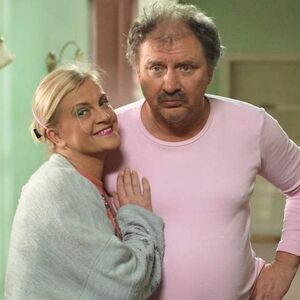 Ferdek and Halina
Add a photo to this gallery
Retrieved from "https://villains.fandom.com/wiki/Ferdynand_Kiepski?oldid=4321242"
Community content is available under CC-BY-SA unless otherwise noted.