The Count of Monte Cristo

Marry Mercedes (both succeeded).
Cover up his scandals and crimes (failed).

In the 2002 film, he is portrayed by Guy Pearce, who also portrayed Aldrich Killian in Iron Man 3 , Leonard Shelby in Memento, Kendall Duncan in Bedtime Stories, Charlie Rakes in Lawless, Dr. Emil Harting in Bloodshot, Peter Weyland in the Alien franchise, and Ebenezer Scrooge in the 2019 miniseries adaptation of A Christmas Carol.

In the novel, Mondego is Mercedes' cousin, and harbors unrequited feelings for her. Jealous of Dantes for winning her heart, he hatches a plan to have Dantes imprisoned. He learns that Dantes' captain, Leclaire, has given him a letter to deliver to a wealthy man named Noirtier - who, unbeknownst to Dantes, is an ally of the exiled Napoleon Bonaparte. Mondego conspires with Dantes' shipmate Danglars, who covets Dantes' position as Leclaire's heir apparent, to send a note accusing Dantes of treason to Noirtier's son Villefort, a local magistrate. Wanting to keep his father's Bonapartist sympathies secret, Villefort destroys the original letter and charges Dantes with treason. Dantes is convicted and imprisoned in the Chateau d'If.

During Dantes' imprisonment, Mondego marries Mercedes, has a son with her named Albert, and becomes a celebrated general in the French Army. He is given the title of Count de Morcerf in recognition of his successes on the battlefield. Several years later, Mondego meets the mysterious Count of Monte Cristo - unaware that he is none other than Dantes, who had escaped from prison and reinvented himself as a wealthy nobleman in order to get revenge on the men who destroyed his life.

Dantes learns that, years before, Mondego had betrayed the Ottoman ruler Ali Pasha to the Turks and sold Pasha's wife and daughter into slavery. Dantes leaks the story to the press, and the resulting scandal ruins Mondego's reputation. Mondego is brought before trial for his crimes, and Mercedes and Albert disown him upon learning of what he had done to Dantes. Completely alone and facing imprisonment, Mondego commits suicide by shooting himself.

In the film adaptation, Mondego is an aristocrat and Dantes' childhood friend. A spoiled, narcissistic bully, Mondego considers Dantes, who is poor, to be his natural inferior. He nevertheless lusts after Dantes' fiancee Mercedes, and resents Dantes for being happier with nothing than he is with everything. As in the novel, he conspires with Danglars and Villefort to frame Dantes for treason, and marries Mercedes once his rival is imprisoned. (In a departure from the novel, he also murders Villefort's father.) He has a son with Mercedes named Albert, but is unaware that the boy is actually Dantes' offspring, and that Mercedes only married him to provide security for her unborn child.

By the time Dantes escapes from prison, Mondego has inherited his father's estate and become one of the wealthiest men in France. He is openly unfaithful to Mercedes, and squanders his money on gambling and women. Dantes inserts himself into the unwitting Mondego's life as the Count of Monte Cristo by staging Albert's kidnapping and rescue. He then engineers the arrests and confessions of Danglars and Villefort, which directly implicates Mondego in conspiracy and murder.

As Mondego tries to flee, Dantes reveals his true identity to his former friend, and prepares kill him. Upon learning that Albert is really his son, however, Dantes relents and spares Mondego's life. Mondego is overcome with rage and jealousy, however, and engages Dantes in a duel. Dantes, who is the superior swordsman, stabs Mondego in the heart, killing him. 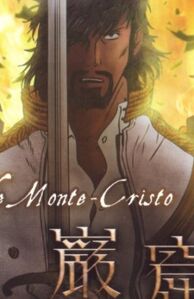 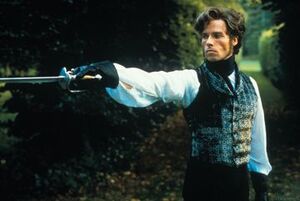 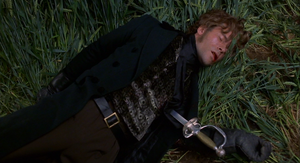 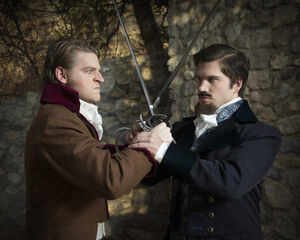 The Count vs Fernand.