Hide his cartel business under the disguise of vineyard owning.

He was a renowned winemaker who ran his drug business out of his old vineyard. He lived in Chile, and owned a seaplane, which was stolen by Agent 47, after the latter assassinated him in 2004. He served as the main antagonist in the mission A Vintage Year.

He is the father of Manuel Delgado (who was also assassinated by 47 on the same day he died) the uncle of Rico Delgado and Hèctor Delgado, and the adoptive father of Andrea Martinez.

Born in 1936, Fernando served as a colonel in Chile's intelligence service during the rule of Augusto Pinochet. In 1967, his first son and heir, Manuel Delgado, was born, followed by Jose Delgado and possibly more children.

In the 1990's, after his brother, then the Don of the Delgado cartel, was killed during a raid on his compound in Colombia, Fernando took over the cartel and transferred it back to his vineyard in Chile, possibly in order to avoid the forces of Pablo Belisario Ochoa in the drug wars. Later, he became renowned for his international reputation for excellence and became one of Chile's most respected vintners.

Living in Chile under a businessman guise, Fernando became one of Chile's most respected vintners, with an international reputation for excellence. His wines have won competitions around the world. He was also an accomplished cellist and music composer, who sometimes performed in party. He was also known to be a generous man who lend people money in exchange for favors. However, very few people would know that he ran his drug cartel business in secret, and his "heroic" deeds were distractions to hide his true agenda.

One time, he met Jorge Franco, and upon learning that he was a gifted chemist, he promised him to waive any debts if he would work for him as a chemist. After an old friend of his, Mr. Martinez, was slaughtered on his estate by the military, Fernando adopted the only survivor of this massacre, Andrea, and sent her abroad to study in the US.

On February 9, 2004, Fernando planned to unveil his new wine, which was named for 1980s B-movie action star Rex Stanton. He, together with Manuel, was killed by Agent 47 under the orders of the ICA. After that, his cartel was weakened so much that they were forced to move to Columbia following raids against them. Fernando's nephew, Rico Delgado, took over the business and vowed to seek vengeance for his uncle's death, only to have himself killed 15 years later, again by 47.

According to Lucas Grey's flashback, Fernando was playing his cello on the balcony when he was strangled by 47 using a fiber wire from behind (which was originally one of the various options to eliminate him in Blood Money, which became canonical). However, some intel indicated that the deaths of him and his son were reported as accidents. 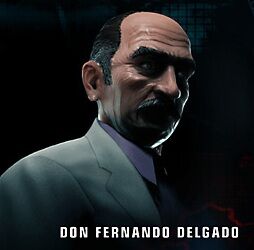 Fernando Delgado as seen in the mission loading screen. 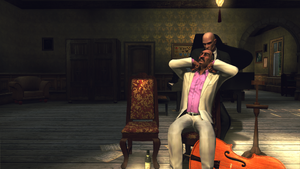 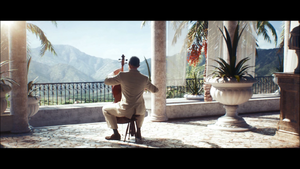 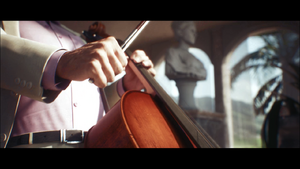