Knight of the Deboth Army

Gathering anger to empower himself.

Ferocious Knight D, also known as Deathryuger, is an ancient knight of the Deboth Army and the main antagonist of the Zyuden Sentai Kyoryuger: Gaburincho of Music.

He was voiced by Mamoru Miyano, who is known for voicing Light Yagami and Shuu Tsukiyama.

D was among the first knights created by Chaos in response to the emergence of the Zyudenryu. In his mission to collect the emotional energy of the dinosaurs, D took control of Tobaspino and used it to wipe out the dinosaurs. However, the singing voice of Mikoto Amano's ancestor restored enough of its freewill to crush him.

D was resurrected by Chaos and received the Deathryuger Zyudenchi to become Deathryuger, that resembles a Navy Kyoryuger. D captures Mikoto to use her singing voice to revive Tobaspino while cutting his ties to the Deboth Army, using Tobaspino and a captured Ankydon and Bunpachy to form Spinodai-Oh and uses the Zyudenryu formation to destroy the world with its Super Destroying Light Bullet. But knocked out of Spinodai-Oh, D falls to his death after being mortally wounded by Kyoryu Red.

However, having evolved into a more powerful red form with the War Spear-Sword and needing drinks of Restoration Water to maintain his powers, D escapes from Deboth Hell and orchestrates a scheme to use Mikoto's singing voice to raise an army of the dead to conquer the world.

When the Kyoryugers foil his plans, D enlarges himself to destroy the world before he is hindered by Mikoto's singing as Spinodai-Oh destroys him. 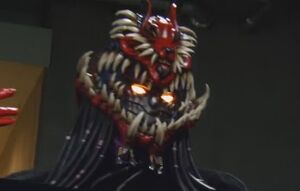 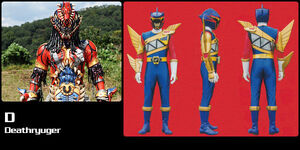