Ferra and Torr are characters from the Mortal Kombat series. They are the antagonists of the game working for Kotal Kahn for the accomplishment of his plans.

Ferra and Torr appear as enforcers for Kotal Kahn. When Kung Jin interrupts the execution of an Outworld citizen guilty of theft and defeats Erron Black, Ferra and Torr arrive to break up the fight. Takeda Takahashi, Jacqui Briggs, and Cassie Cage all attempt to singlehandedly take on Torr, but are brushed aside. However, Kung Jin prevents Torr from injuring them further. Ferra and Torr face off against Kung Jin, but are defeated, leaving Ferra trapped under Torr's unconscious body.

The duo later appear alongside Kotal Kahn when he arrives in Earthrealm to reclaim Shinnok's amulet. Ferra and Torr confront Jacqui after she defeats Reptile and Ermac, but they are defeated and quickly recover to attack Takeda. The two easily beat the weakened Takeda (the latter of whom was exhausted from fighting Kotal's soldiers), and Torr throws him to his comrades. As Kotal's forces surround the group, Ferra and Torr are the first to rush to finish off the group. However, they are both frozen by Sub-Zero as he and the Lin Kuei soldiers come to rescue to Earthrealmers. It's unknown what happened to the pair, but it is assumed that they returned to Outworld with their comrades.

Although Ferra and Torr aren't playable characters in Mortal Kombat 11, D'Vorah mentions she found their dead bodies in a intro quote. It is unknown if she is lying, and if she isn't, the fact deconfirms the possibility of Ferra and Torr returning in a later game, though.

Ferra is a small warrior with clawed gauntlets on both of her hands. She sits atop the large brute, Torr, who wears a frayed piece of cloth tied to his face bound by ropes, a single hole in the cloth exposing one of his red eyes. Both wear spiked armor, including shoulder and leg plates, while Ferra wears various leather straps bound around her body and Torr uses ropes to hold his armor and clothes in place. Ferra wears some type of ankle pads on her feet while Torr wears sandals.

Ferra and Torr are a mix among savage, barbaric, and destructive in nature. Ferra is the brains and handles the communications. Torr is a hulking brute who doesn't speak much, but instead uses grunts.

As a byproduct of being a symbiotic race, Ferra and Torr get along well together and display concern for the other. When Ferra/Torr win a fight (without using a fatality), Ferra will playfully congratulate Torr by saying, "Good boy," with Torr responding with a grunt that almost says what she calls him.

Torr's sheer size gives him superhuman strength and durability, easily allowing him to overpower his opponents, while Ferra's smaller frame gives her nimble speed and her bladed gauntlets give her a deadly cut. The duo work well together with Ferra ordering Torr; Torr himself even uses Ferra in conjunction with his charging attacks, adding extra damage. Ferra can also hurt Torr with her claws to enrage him, giving his attacks a stronger edge.

Ferra and Torr don't always have to work together, as Torr can fight solo while Ferra stands on the sidelines, cheering him on. This doesn't make him any less dangerous, as he is somewhat enhanced with more brutish moves in place of Ferra, allowing him to become more aggressive with on combat with the addition of moves he wouldn't be able to perform with Ferra. 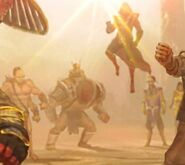 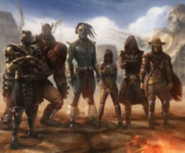 Retrieved from "https://villains.fandom.com/wiki/Ferra_and_Torr?oldid=3536309"
Community content is available under CC-BY-SA unless otherwise noted.