Make money by any means possible (even kill anyone knowing his true nature; failed).

He is the CEO of GothCorp, a philanthropic corporation that would be referred as "The People Company". At first, Boyle appeared to be a humanitarian, but in reality, he is a stone-cold and unethical sociopath involved in illegal as well as dangerous weapons manufacturing. Because of this, Ferris is involved in various crimes, including extortion, embezzlement, abduction, and even murder. Through his greed, he is also responsible for Mr. Freeze's condition.

He was voiced by Stephen Tobolowsky, who also played Happy Chapman in Garfield: The Movie, Uncle Ubb in The Lorax and Ronald Tompkins in Toy Story of Terror!.

Before the beginning of Cold, Cold Heart, Ferris Boyle secretly planned on researching highly illegal and dangerous cryogenic weaponry, without having any of his staff members finding out his true intentions. Boyle eventually found out that one of GothCorp's scientists, Dr. Victor Fries, managed to place his wife, Nora Fries, into cryostasis. Inspired of the scientist's work, Boyle offered a deal to Fries to work on his cryogenic weapons program, while stating that he will find the cure for the terminal illness Huntington's Chorea, which Nora was afflicted with.

Fries initially agrees to the deal, while he was desperate of saving his wife. But Boyle truly had no intention of keeping his word. When Fries discovered his intentions, he decided to secretly begin his research on the cure for Huntington's Chorea himself.  Boyle, refusing to accept that action, brought his security guards to the lab, confiscated Nora's capsule, and beats Fries up. As he kicked Fries into a cryogenic cannon, an explosion occurred, trapping Fries and a security guard. Boyle managed to escape from the lab after dropping his weapon, leaving the lab staff for dead and having the place quarantined to cover up the incident.

The DLC began on New Year's Eve, when Ferris Boyle was accepting the award for "Humanitarian of the Year" at the Wayne Foundation. The ceremony was later interrupted by the arrival of Mr. Freeze and some of the Penguin's henchmen, intending to abduct Boyle for the security codes to access Nora's capsule and get her out of Gothcorp. After being successfully captured, Boyle was dragged to the lower level of GothCorp and later taken hostage by the Penguin. Batman tried to save Boyle from the quarrel between Mr. Freeze and the Penguin, but Mr. Freeze once again captures him and brought him to the Prophellant Research Wing. Boyle refused to give Freeze the security codes and taunts him, making the latter threaten to freeze him to face the same experience Nora suffered from.

Batman eventually caught up with them and revealed that he knows about the truth about the incident. Boyle falsely stated that it was an accident, enraging Freeze and threw him into a containment field. After Batman defeated Freeze, Boyle revealed his true nature by "thanking" Batman and aimed a cryogenic jet-stream at Freeze. Batman pushed Freeze out of the way and got himself frozen. With that, Boyle decided to leave Batman for dead to make sure that any other witnesses would never find out about the discovery.

He took a pipe from a helpless and pleading Freeze's cannon and sadistically beats him, while taunting the scientist to let him live long enough to watch Nora die. Batman broke free from the ice with his XE suit, punches him into unconsciousness, and tells him in disgust, "Take a seat, Humanitarian.". With the incident exposed by Batman, Boyle was arrested alongside Freeze and Penguin. 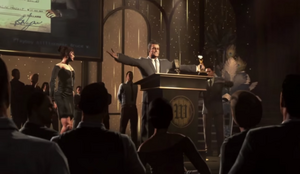 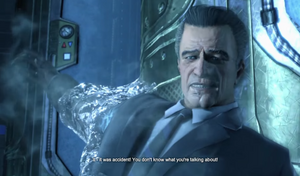 Boyle pleading for his life. 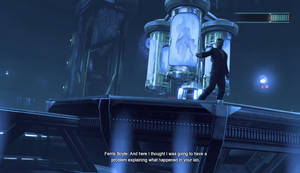 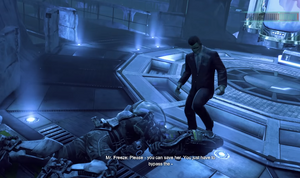 Boyle about to beat Freeze to death. 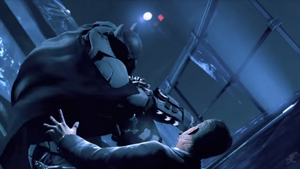 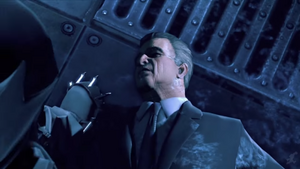