Hanging out with the Disgustoids
Basically doing whatever he wants

Become accepted by the humans

Festro is purple with green eyes, two large tusks, and 2 smaller fangs in between. He is quite muscular and only wears a pair of briefs and a pair of brocro sneakers. He has black hair (spikes) and a bald spot at the top. Festro also has purple knuckles on his fingers.

Festro is brash, crude, selfish, and inconsiderate. He has the personality of a typical college frat boy, as all he wants to do is slack off and party. He rarely takes responsibility for any of his actions and is usually taking advantage of his friends.

Funstro is Festro's positive split personality. If one pulls out one of Festro's teeth, he will turn pink, have a happier voice, and act nicer and more playful and happy. Funstro is always wanting to have fun and never wants to take a break from it ever.

Fightstro is Festro's negative split personality. If one pulls out both of Festro's teeth, he will turn big and red and turn into an evil monster who is angry and mean and is always wanting to fight with people. 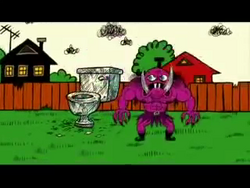 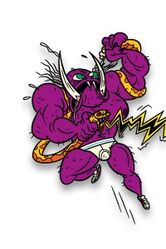 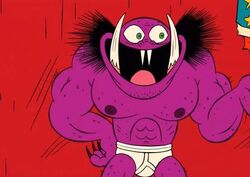 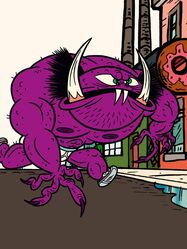 Fightstro
Add a photo to this gallery

Retrieved from "https://villains.fandom.com/wiki/Festro?oldid=3459257"
Community content is available under CC-BY-SA unless otherwise noted.