Training to kill others

Vengeful Fetus
The Fetus is a minor antagonist in Paradise P.D.. He is the currently unborn second child of Karen and Randall Crawford who plans to kill Kevin when he's born.

When the fetus was still a sperm cell, he lived in a city inside Randall's body in an area known as Spermtropolis. He was living life to the fullest and things couldn't have been better. This all changed one fateful day, when a five-year-old Kevin Crawford was playing with a gun that Randall left behind and accidentally shot his dad in the genitals, destroying all of Spermtropolis and killing all of the sperm cells in there, except for one. This one sperm cell lived alone in Randall for fifteen years, just trying to get by, all the while believing Randall was responsible for destroying Spermtrolis and all of his brethren, so he made him his archenemy.

One day, Randall and Karen Crawford had unprotected sex, under the impression that Randall was impotent, which he was. However, this time, the sperm cell was able to swim up into Karen's vagina and travel to her egg, which he then fertilized, helping him develop into a healthy, living fetus. Randall and Karen were delighted to know that they were finally having a second kid,, and they knew they had to protect him at all costs, since he was their last chance at having a kid.

Dr. Funtlichter showed Karen and Randall a sonogram of their baby and when he did, the fetus gave Randall an angry look and flipped him off. Randall was angered from this, but since he was the only one who saw it, so Karen didn't believe him. Nevertheless, Randall knew te fetus had it out for him, and he reached into Karen to try and attack it, which only made him look like a psychopathic jerk who was trying to kill his unborn child.

Later that day, Karen and Randall had some sex, but as Randall got ready to begin, fetus got ahold of his penis and broke it in half, brutally injuring Randall and having him sent to the hospital. Dr. Funtlichter didn't believe the fetus was responsible for this injury, and said that the reason for this was because he was too rough when having sex with Karen.

That night, Randall chose to sleep on the couch just to get away from the fetus, but while he was in bed, the fetus crawled out of Karen and came down to Randall to attack him. Randall chased him back to Karen with a baseball bat, but Karen woke up and stopped him, once again seeing him as crazy and not having seen anything the fetus did. Randall decided to stay up the rest of the night and guard Karen with a shotgun in case that fetus ever came back out, but he ended up falling asleep.

When Randall awoke, he found himself hanging from the fetus' umbilical cord, which he had dangling from the ceiling fan in the living room, much to his horror. The fetus stood there next to a chair Randal was standing on and planned on taking it out from under him but first, Randall asked why he was doing this to him. As the fetus explained, it was because of how he destroyed his home city and caused the mass genocide of all his brothers and sisters, back when he was in the womb by shooting himself in the testicles and no he planned to get revenge. Randall explained that he had nothing to do with his testicular destruction and the man he was after was Kevin, but Randall told the fetus was really happened and the fetus felt a little bad about himself. He let Randall go, apologizing for his mistake as Randall forgave him and even asked if they wanted to hang out before he went back. The fetus obliged, and they sat and watched Quentin Tarantino movies while drinking beer, getting along quite well. Randall offered to show the fetus some porn, but the fetus said that he should really get back to his womb and they they can watch porn when he's born. The fetus and Randall hugged before the fetus went back into his womb, where he planned to stay until his birth.

Inside the womb, the fetus had a photo of Kevin among a bunch of carvings of phrases like "Die Kevin" and "Must Kill Kevin". The fetus did push ups there, as he trained for the day he would soon be born and finally kill Kevin Crawford for what he did to his city.

At the end of the Season 3 finale, Karen's water broke, foreshadowing that next season, the fetus was going to be born, now as a fully developed baby.

The fetus is a pink fetus in a womb. He has a big head with darker pink veins on it, large, glazed eyes and teeth. He is attached to a bright pink umbilical cord.

The fetus is a hateful, antagonistic, and homicidal figure, who is dead set on attacking, torturing, and ultimately killing his older brother, Kevin as revenge for destroying his home city back when he was a sperm. He is very dedicated to his goal and absolutely unforgiving, still being hell bent on exacting this revenge, even fifteen years post factor. The fetus does have a good side, however. He is on good terms with his father and enjoys spending time with him, watching violent and pornographic movies and drinking beer, despite being largely underage, when it comes to both of these activities. 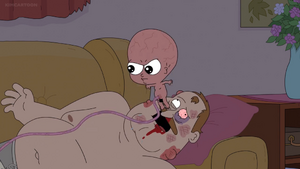 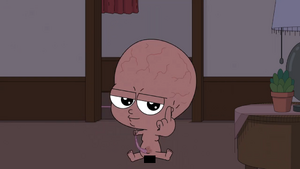 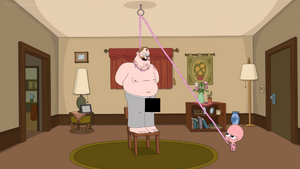 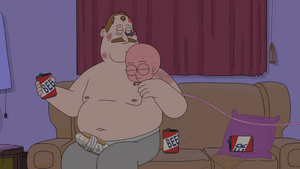 The Fetus and Randall becoming friends. 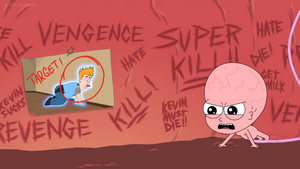 The Fetus training to kill Kevin.