Ruling the Roman Orthodox Church from behind the scenes.
Orchestrating many events within the shadows.

Destroy the enemies of both God and the Roman Orthodox Church.

Fiamma of the Right (in Japanese: 右方のフィアンマ, Uhō no Fianma) is the main antagonist of the light novel and anime series A Certain Magical Index: Old Testament. He is the leader of God's Right Seat and the de-facto ruler of the Roman Orthodox Church, leading it from behind the scenes for some time and manipulating the Pope Matthai Reese for his own personal agenda.

He is voiced by Toshiyuki Morikawa in the Japanese version of the anime and Christopher Wehkamp in the English version.

Fiamma of the Right was the leader of God's Right Seat, though he was initially absent until appearing in Volume 16. Believing humanity to be sinful and filled with malice, Fiamma secretly set in motion a plan to attain the status of "La Persona Superiore a Dio" (The One Above Good) and purify the planet.

Shortly after his emergence, Fiamma revealed his true intentions along with how he'd been manipulating the Roman Orthodox Church all along and backstabbed the Pope. When the Pope attempted to stop Fiamma, Fiamma easily pushed him away with an attack that would have destroyed the entire Vatican had the Pope not bore the brunt of it.

Fiamma's next move was to obtain control of Index Librorum Prohibitorum. To do this, Fiamma took advantage of the coup in England being led by Carissa to use as cover for his plans. He appeared shortly after the princess was defeated and used the fighting as a distraction to obtain the spiritual remote to Index's John Pen mode, bringing her under his control and allowing him to access the 103,000 Grimoires contained within her. Fiamma then attempted to dispose of the princess, who he had used as his pawn, but was stopped by Touma. With Index in his possession, Fiamma chose to leave now that he had gotten what he came for.

Fiamma's next move was to use his power as a member of God's Right Seat and ties with the Russian Orthodox Church to instigate a war between Academy City and Russia. Fiamma's plan was a success, after manipulating the Russian Orthodox Church into engaging in hostilities with Academy City Fiamma set off World War III, the first global conflict between the Science and Magic factions.

With all the pieces in place, Fiamma commenced the final stages of his plan, by having two hundred magic-wielders of the Russian Orthodox Church perform a ritual summon holy items from all across the world to create his flying fortress, the Star of Bethlehem. Once the Star was formed, Fiamma betrayed the Russian Church and revealed he'd been using them all along, no longer needing them since he now knew the spell and had Index in his control to keep the Star afloat. Trapped inside the fortress, Touma goes to stop Fiamma's scheme.

However, during their confrontation, Fiamma was able to attain the final component he needed for his plan: Touma's Imagine Breaker. After separating the Imagine Breaker from Touma, Fiamma used his Holy Right's Third Arm to absorb the Imagine Breaker and its power, leading him to finally ascend to being The One Above God. Fiamma then attempted to strike down Touma and finish him off with his Third Arm but, shockingly, Touma was able to regrow Imagine Breaker and block Fiamma's attack. Though weakened, Fiamma attempted to power himself up again by using the distortion between Heaven and Earth to level Eurasia with the Telesma created and absorb the malice formed as a result but his plan was thwarted by Accelerator, who stopped the Telesma.

Having been brought down and caused to doubt his plan, after being overpowered by Touma Fiamma realized he was defeated and accepted his death would come soon as Bethlehem was now beginning to collapse. However, despite there being only one escape pod within the Star of Bethlehem, Touma chose to save Fiamma and shoved him in before sending it away from the fortress.

After landing in the snowy Russian plains, Fiamma got out of his escape pod, grateful for Touma's generousity. Soon after emerging, Fiamma was attacked from behind by Aleister Crowley, who shot off his right arm. Aleister commended Fiamma for his plan to achieve the One Above God, but commented that he still yet to attain the same level he had. The two then clash, with Fiamma determined to not allow Aleister to tear down the world Touma had fought for and attacked him, only to be overpowered and left for dead by Aleister. However, Fiamma did not die and was able to stay alive long enough to be saved by Ollerus and Silvia.

Fiamma of the Right is a tall young man with a rather lanky appearance and has golden eyes with fiery red hair along with a red suit and pants as his typical attire. He always has a calm look on his face with a calculated expression and a calm smile all the time. This is due to his plans succeeding all the time although after his master plan had failed, his expression changes to that of Aleister Crowley; cold indifference.

Fiamma of the Right is an arrogant, self-centered and sarcastic individual who is delusional in his beliefs that what he does is for the greater good even if it means distorting the world and starting another world war. He is a solitary and isolated man focused more on his plans than others. As the leader of God's Right Seat, he seeks to become the "One Above God" and acquire both Godhood and Ultimate Salvation. He manages to acquire these goals however he betrays his former followers and is not afraid to abandon anyone he sees as unfit. 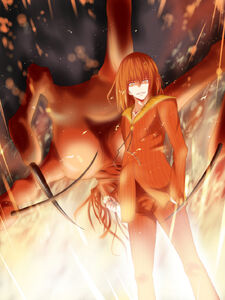 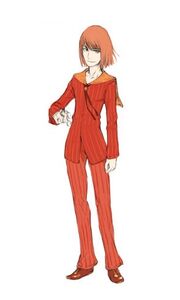 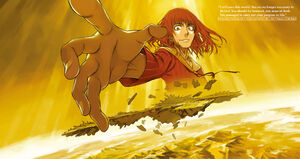 Fiamma as he appears in season 3 of the anime.